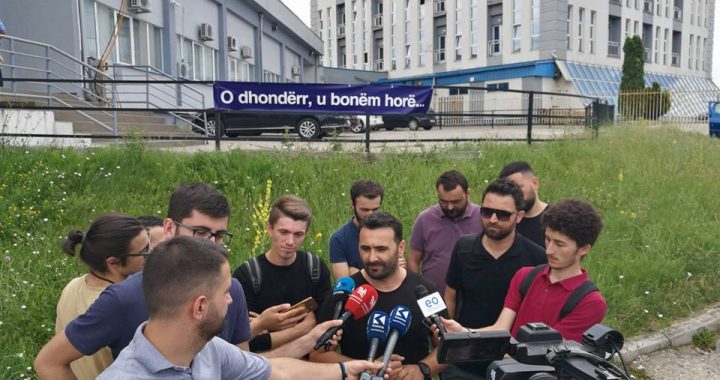 Lezi talking to journalists; in the background "In-law you shamed us!" | Photo: Plator Gashi.

A small number of people protested against the recent change of the logo for theKosovo Football Federation in Prishtina.

A handful of protesters gathered in front of the offices of the Kosovo Football Federation, FFK, to voice their disapproval over the new logo of the federation on Tuesday.

The logo, which was made public last Saturday, received considerable social media scrutiny and was widely accused of poor design. The protestors also claimed conflict of interest since Sali Musliu, the author of the winning design, is brother-in-law to Diturie Hoxha, the head of marketing and PR at the federation.

Shortly after the protesters convened, deputy president of the FFK Agim Ademi and general secretary Eroll Salihu joined the crowd.

Salihu, who affirmed that the submissions were anonymous and only identified by codes, said that they were asked by UEFA and FIFA to “modernize” their logo.

“The goal of the executive committee was to involve everybody who was interested, so we called for an open bid where experts and non-experts could compete,” he said. “We promise that, if the people are not satisfied [with the logo] after this qualification cycle, we will open a new bid.”

Ademi said that Hoxha could not have had any influence over the selection of the logo as she was not herself part of the committee.

“We did not know that this connection existed, I say this very sincerely. Even if that is the case, she was not among the five people who decided on the design. If she were, then it would naturally be a conflict of interest,” he said.

Arben Lezi, the Prishtina designer who organized the protest, said that the logo does not do a good job representing the country and is “amateurish.” After privately meeting Ademi and Salihu, Lezi quoted the officials of saying that the logo was approved by the late president of the Federation, Fadil Vokrri, who recently passed away.

“The federation is telling us that UEFA and FIFA will not allow us to change the logo for another two years, I believe that when the time for the change comes they will also be involved in the process,” he said.

Musliu, the Frankfurt-based designer of the logo from Gjilan, said that protest is legitimate, yet he admitted that he did not expect this much media attention.

“Personally, I am pleased that there are such reactions, regardless of the fact that a large number of people were not satisfied with the selection. Yet they [the protesters] need to understand that the evaluation of the commission, which  was specially formed [to assess] the logo, needs to be respected, because they are competent and professional regarding the aesthetic aspect,” he said.