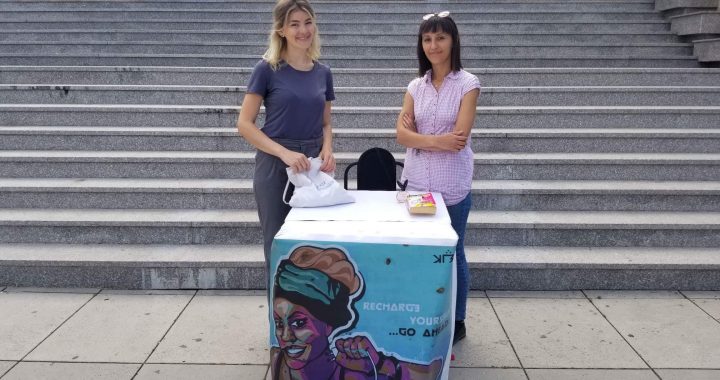 To help the women’s shelter in Gjilan stay afloat, a donation day for sanitary and hygiene products, clothes and toys will take place outside the National Theater in Prishtina on Wednesday.

From 10 am to 6 pm on Wednesday, June 20, a small group of women are setting up a stall in front of the National Theater of Kosovo, looking for donations of sanitary and hygienic products, clothes and toys.

The donation event, named Grate per Grate, or Women for Women, is being organized to help the women who have taken refuge from domestic violence at the shelter in Gjilan.

The organizer of Grate per Grate Lavdi Zymberi, originally from Gjilan herself, explained how her pastime blogging about her travels turned into an online space connecting women to address the funding crisis shelters in Kosovo are faced with.

“We’re interested in helping women who have escaped domestic violence, because currently, the state is not helping them,” she said. “There is no state budget allocated to them [the women’s shelters], and this will hopefully help to make their lives a little bit easier.”

In January this year, eight of the nine women’s shelters around Kosovo, including the shelter in Gjilan, were forced to close after the financial support from the Ministry of Labor and Social Welfare was  delayed.

Although the government allocated emergency funds allowing them to reopen, the shelters continue to face financial strain, as in order to receive funding from the government, shelters must be able to prove that they are able to cover 50 per cent of their costs through other means.

Kosovo Girl Travels, run by Zymberi, is a network of around 400 women who have lived, worked or passed through Kosovo, who help each other with advice when it comes to traveling around the world, and became a platform for sharing ideas of how they can give back while they do.

“Another travel blogger in India shared her idea of collecting all the soaps and shampoos from the places she stays while she travels, then she sends them to women’s shelters,” she explained. “We thought it was a really great idea, and decided that we should do something, too.”

Zymberi, who also works as a freelance consultant for the Kosovo Center for Gender Studies, explained that the shelter in Gjilan has been struggling to stay afloat since the initial closure of the shelters in January.

People rarely understand how useful sanitary products, toiletries and other items for women’s hygiene are for women in the shelters, she explained, who benefit from donations of basic everyday essentials like these.

Zymberi met the director of the shelter in Gjilan, who explained that living conditions in the shelter were getting worse because of the lack of resources and funding. She stressed how important it is for the women in the shelters to receive donations of any kind.

“We’re hoping to make this a tradition, so this time we’re going to help to women’s shelter in Gjilan, but we hope to do this every three or six months, and help another shelter,” she said.

Zymberi and her group will be accepting donations from 10 am to 6 pm outside Teatri i Kombetar i Kosoves, the National Theater of Kosovo, on Wednesday, 20 June.