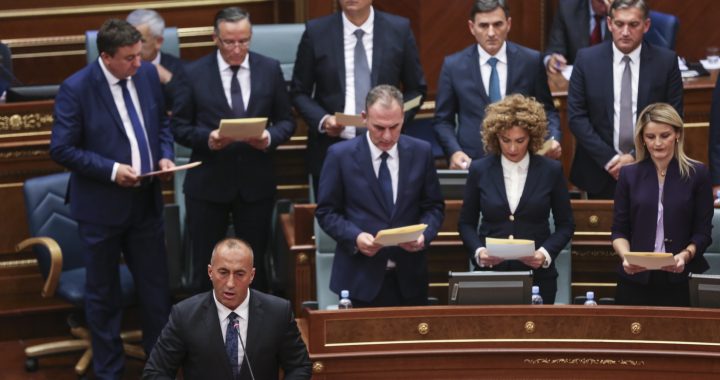 The state as a business model

If you could give a name to this time period, the most suitable would be: the ugliness of the failure of a free people unprepared to take its fate in its own hands.

Have you seen those men with blacked out glasses, with brand-new, shiny suits, shaved heads, aggressive gestures, with archaic language and acting in affect? I am sure you have seen them. They are not actors in some theatrical play, they are state officials. Their stage is the state. They pretend to govern, administer, make decisions, and they act as if they get things done. Alas, this is only a facade. Something completely different happens behind that facade: embezzlement of various forms, where and whenever possible. This happens because, to them, Kosovo is a tender, or a chicken whose feathers are plucked one by one by its masters, its “liberators.”

It is profitable to enter Kosovo politics. That is why there are four or five parapolitical clans that wrangle to occupy as much as they can, to exercise their influence and to seize as much as possible. Even the poorest states can be beneficial for exploitative “elites.” They profit from infrastructure projects, privatization, passport printing, they profit during their efforts to privatize the post and telecom, they profit when the airport is handed over with concessions, and they benefit when schools are built. There is always an opportunity to profit. Moreover, Kosovo also has underground resources. They benefit from those as well.

Within Kosovo, what the people in power do is simulate a government. Outside of Kosovo, hardly anybody opens their doors. Almost nobody welcomes Prime Minister Haradinaj in EU countries. That is why we see him circle around Decan, with his tales left unchanged for 20 years, without a vision for the future. A diplomatic success for him is when he hosts the Macedonian prime minister at his house for dinner. When talking about a strategy for the dialogue with Serbia, this government barely managed to type two pages of text, a poorly-done school assignment, and afterwards the prime minister somewhat openly “agreed” that he is not capable negotiate with Serbia. Yet, he demonstrates other capabilities, like quarreling with a woman at a podium in Prizren. “The state – this property of mine” seems to be the maxim of these nonchalant rulers.

Laws exist, but they do not apply to rulers. They exploit them when it is convenient, and kick them away when they become obstacles. Regardless, this is not an invention by the current government, it is only continuing the aggressive tradition of the Democratic Party of Kosovo, PDK – family, property, state, or better said, the state as a family property under PDK, of which other parties can also take a piece. All this, under condition that everybody keeps their mouth shut, much like the Omertà in southern Italy.

How long is it going to be like this? How long will this anarchy last? For as long as people are convinced that a tin of canned meat is all they need to survive. If civic ambitions for a functional state are reduced to the biological imperative of survival, serious political changes will not happen. Only a political class so aggressive, so primitive, so greedy to rob everything it can, destroys the magic of freedom. More people have left Kosovo since 1999 than during the 90s. Thousands of others are anxiously waiting for visa liberalization to migrate, not as tourists, but with hopes that they will land a job in some EU country. The power of disappointment is much stronger than the belief in positive change in the mid-term. Challenges are radical, but the incompetence of the rulers is just as radical.

What about the opposition? There is no opposition. That is because ‘opposition’ means the presentation of alternative governing models that may convince citizens. Slogans that remind one of the Stone Age do not work. The effects of Vetevendosje’s split and the turning of the Democratic League of Kosovo, LDK, into a party of two or three mayors who don’t aim higher than a governing coalition with PDK, make Kosovo’s political scene a swamp. That is why the government has it so easy. Politics are only events, empty talk and vacuous conversation on Facebook (which is embellished with the craziness of political clowns), the unveiling of effigies and memorials, “memorial academies,” and men’s talk. This cacophony is numbing people’s ability to reason. One tin of canned meat is enough, maybe we’ll have two tomorrow. Then we have a little bit of fun commenting on Facebook about the luxurious Swiss hotels where the prime minister spends his vacations, we think about and quickly forget how many millions of state funds were wasted to make Hashim Thaci’s wish of having a biographical book come true, in which he is compared to Nelson Mandela and Winston Churchill, and we get upset when again, for the umpteenth time, an “imam” explains history to us. The effect? Nothing. The propaganda machine of fake news, aggressive language, and slander works unstoppably. If you could give a name to this period, the most suitable would be: the ugliness of the failure of a free people unprepared to take its fate in its own hands.