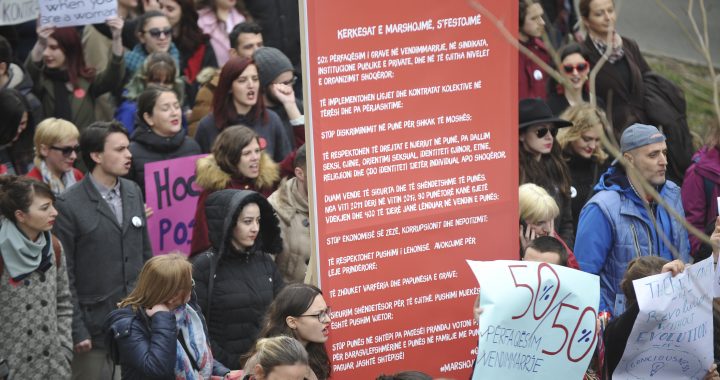 Struggling to make ends meet as government support requires 50 per cent of their budget to come from other sources, NGO-run shelters for victims of domestic abuse might face closure once again.

Kosovo shelters for victims fleeing domestic violence are having financial difficulties, which could lead to their closure once again.

In January, eight of the nine institutions which provide shelter to women and children fleeing domestic abuse in Kosovo closed temporarily after government funds for January and February were delayed. The government allocated emergency funds to keep the shelters afloat in mid January, but the institutions, which are run by local NGOs, are once again facing financial strain.

Directors of the shelters said that the shelters had to operate without financial support from the Ministry of Labour and Social Welfare, MLSW, throughout April, and they expect to receive funding only after May 15.

Moreover, directors of shelters complained that a recent open call for social service grants, published by the MLSW on February 5, requires organizations to secure at least 50 per cent of the overall project budget from other sources. It is a steep increase from last year, when the ministry required only 20 per cent co-financing of the project.

This new condition makes the organizations more vulnerable, as most of them rely predominantly on governmental grants to operate as shelters. Ardita Bala, the director of the shelter for women and children victims of domestic violence in Peja, is worried that the new condition jeopardizes their main source of income.

“At this phase, we have no [other] donations and it is difficult for us to get the [Ministry] grant. MLSW has given 20,000 euro grants for an eight month period, and requires that we [the shelters] get 20,000 euros from elsewhere –  this is a problem,” Bala said.

The Ministry of Labour and Social Welfare confirmed that the new open call for grant applications expects that applicants cover 50 per cent of their project costs by “grants they are expecting to receive from different sources of fundings, such as municipalities and [the organization’s] internal funding.”

However, Mimoza Kqiku, a spokesperson for the MLSW, maintained that this condition does not exclude NGOs that cannot ensure co-financing from getting government grants.

“The MLSW’s open call for grants does not list a criterion that excludes NGOs which fail to secure the financial support for the other 50 per cent of the costs, but failing to state financial support or failing to ensure funds to cover 50 per cent of the costs, creates difficulties for these organization’s projects to achieve the expected results,” Kqiku said, adding that it was up to the Evaluation Committee to make decisions on the grants according to the “Guidelines for Applicants.”

The open call Guidelines for Applicants are also very clear, stating that “projects can be financed up to 50 per cent of the total cost of the project.”

Bala criticized the ministry for failing to provide comprehensive assistance. As a result, she is already looking for financial support from the Municipality of Peja. The shelter received a 5,000 euro grant from the municipality, but Bala is looking to increase the sum.

“The ministry ought to be aware that these shelters should not close. Seven women and their children were forced to leave the shelter after it was closed in January.”

The ministry’s condition is not legitimate in Bala’s opinion, because there is no guarantee that shelters will be able to ensure co-financing through municipalities. Instead, it only encourages organizations to inflate their budgets and claim they contribute more to the project than they do in reality.

Unlike Bala, who was lucky to receive a municipal grant, directors of shelters Sakibe Doli and Nazife Jonuzi, from Gjakova and Gjilan respectively, said that they received no municipal grants.

Jonuzi said that the domestic violence shelter in Gjilan has not received support from the Municipality of Gjilan, or from any of the other municipalities in the Gjilan region which the shelter covers.

Deputy Minister of Justice and National Coordinator Against Domestic Violence, Naim Qelaj, said that NGOs themselves demanded the 50 per cent self-finance condition.

“NGOs that deal with shelters said that municipalities and [the organizations] themselves should be included,” Qelaj said, adding that although shelters have financial issues, this is not the first time co-financing has been demanded. Qelaj claimed that he is currently “drafting a document through which I will demand financial certainty for [domestic violence] shelters.”

Qelaj also said that the government was considering to fund the shelters entirely through public funds, and will discuss this on May 15, when an inter-ministerial group will issue a joint statement. But even if the government decides to cover all their operational costs, this will only affect funding from 2019 onwards, as this year’s budget has been ratified already.

Adelina Berisha, an advocacy coordinator at Kosovo Women’s Network, said that the network encourages the government to offer financial stability to shelters.

“KWN has always advocated that shelters should be supported 100 per cent by the state, because it is the state’s responsibility to protect victims, both according to the Constitution of the Republic of Kosovo and other laws,” Berisha said.