Kosovo students strive for financial independence, one call at a time

“Most of the people here are young,” said Rina Rama, an administrative officer at Baruti – one of the more prominent German-language call centers in Kosovo – while giving me a tour of their offices and call rooms. As soon as a door opened, ripples of chatter in accentless German escaped the room.

The working areas are spacious, sunlight is dimmed by silver-gray screens and coworkers share a chinwag every so often before the next call comes in. Visible through the windows, the building opposite of the call room, which the company uses as a German-language classroom for prospective employees, displays a fairly large inscription saying Hallo Zukunft (Hello Future). The future, it seems, lies not far from here.

In 2016, data by the Kosovo Business Registration Agency – made available by Open Data Kosovo – listed 119 registered call centers in the country. Although the labor at call centers has been described as repetitive, intensive, and often acutely stressful, a portion of Kosovo’s highly unemployed youth seem to choose calls centers to trampoline themselves into better jobs.

Baruti, which has been operating in the country for over six years, is one of many foreign-language call centers based in Kosovo. A quick search in the Telegrafi, Gjirafa, Oferta Pune and Portal Pune job search websites show tens of open positions as call agent, and they update constantly.

Employing over 250 German-speaking Kosovars, Baruti was founded in 2011 by Kosovo Albanians Muhamet Veliu and Flamur Shala – both of whom live in Switzerland – and registered the business in Lucerne. Dubbing themselves “among the best employers in the country” on their website, they offer a variety of services, including market research and client support, to Swiss and German clients.

Rama, 22, who has been working in Baruti’s human resources department for over a year, said that the company entered the local market at a time when a multitude of call center establishments emerged in the country. 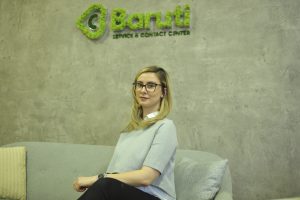 “It was at the time when the trend had just started… yet, most of the call centers then were illegal, meaning they were not registered as businesses,” she said.

In 2015, Kosovo Police arrested a man who allegedly used a call center to sell fake plane tickets worth 500 thousand euros. Although anonymous sources within the industry say that there were a few fraudulent call centers operating in Kosovo, there is no record of other major crackdowns.

As with most other call centers, the only requirements for employment are fluency in the working language, basic computer knowledge, and communicative skills. Owing to the lack of an educational requirement, call centers are low-hanging fruit for job-seeking youngsters.

“You can work with a high school diploma… we pay more than the average salary in Kosovo. It depends on how much the employee wants to work, on the schedule and on the projects as well,” Rama said.

In late 2017, the net average monthly earnings in Kosovo were 363 euros; the general unemployment rate was 30 per cent, whereas youth unemployment hit 55 per cent. With unemployment levels being the highest in the Western Balkans and earnings the lowest, Kosovo has become a hotspot for outsourcing services. While official data on salaries in the call-center industry are unavailable, people I talked to said it could vary from 300 to 600 euros.

Most of the call centers operating in Kosovo outsource to German-speaking countries, including Switzerland and Austria, perhaps because a large portion of the Kosovo diaspora also flocked to these countries since the 1960s.

In 1968, the Yugoslav government signed an agreement with West Germany that allowed the recruitment of workers for jobs with low qualifications, resulting in over 1.2 million Yugoslavs migrating to Germany until the disintegration of the federation in 1995. Consequently, the Yugoslav wars caused the internal and external displacement of around 4 million people.

After war in Kosovo ceased in 1999, many of them returned to Kosovo, fluent in German. Atdhe Zyhranaj, 23, has been working as a call agent for 3 years. | Photo Atdhe Mulla.

Such was the case with Atdhe Zyhranaj, 23, who returned with his family from Germany in 2000. Although, once back, his command of the German language weakened, he reclaimed his skills over the years and now works as a German-language call agent.

“You get… a lot of back pain, you get tired of talking to people sometimes,” said Zyhranaj who has been working for three years as a call agent at IQ to Link, a German-language call center that employs over 500 Kosovo citizens in Prishtina, Prizren and Mitrovica.

Zyhranaj, who spent five years of his childhood in Germany, provides customer service for one of his employer’s clients.

“Since the call center is not a passion, sometimes I feel tired, and there are complaints. There are moments when there are many calls and many people wait on hold, up to 20, and it gets you tired mentally,” he said. 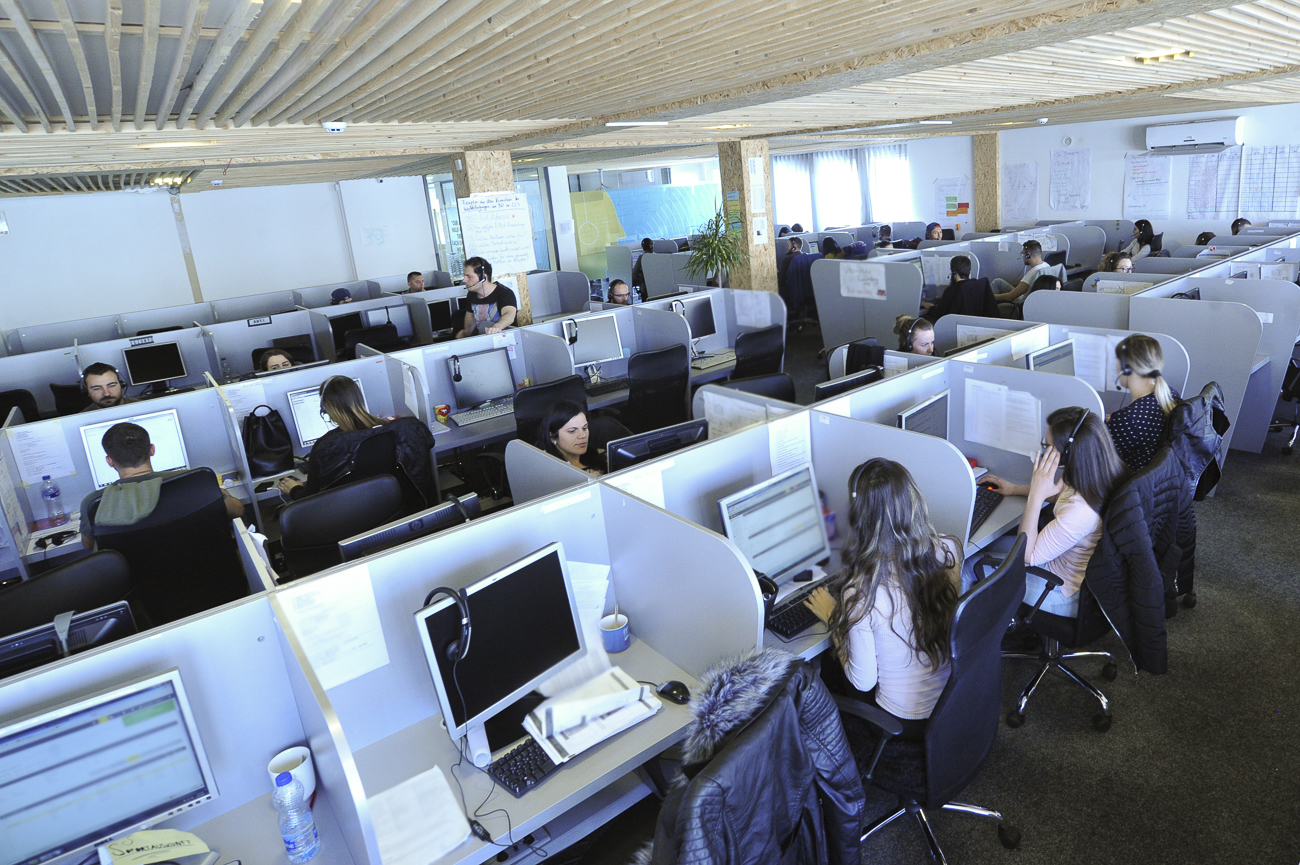 Blerina Beqiri, a Baruti employee and student of journalism, also lived in Germany as a child. After returning from Germany following the war in Kosovo, Beqiri reinforced her German skills throughout high school, receiving a number of certificates. As she is finishing her studies, Beqiri does market research in Baruti, saying that she does not see her call center job as a career but rather as “a game with multiple levels.”

“It is always amusing, people answer in different ways, and time goes by very quickly,” she said, adding that her job resembles gathering information for a survey.

Although she sniggered while saying that her first day was not very good due to beginner’s anxiety, she emphasized that she enjoys her colleagues’ company. Regarding the calls, she said that she gets motivated when call recipients compliment her on her German skills.

“I see it as a place where I spend some of my free time and get paid. The moment I would think of it as a workplace, I would not go there with the enthusiasm that I have now. I have a lot of fun there,” she said.

Although she has been working on her command of German ever since high school, she never thought of moving there.

“[My goal] is to be independent and have my own income, and not leave behind other responsibilities in my life. I get paid well, I have health insurance, and I have time for other things, like school,” she said. “I maybe want  to go as a tourist [to Germany], but it was never my goal to go and live there.”

Back in Baruti’s office, Rama said that widespread financial dependence drives students and young people to seek jobs in the call center market, regardless of their professional aspirations.

“If they do an internship at a hospital, they will get paid less than at a call center. There is a large number of students who come from different places and they rent apartments in Prishtina, if they have to make a choice, they choose to work at a place where they will get paid more,” she said. 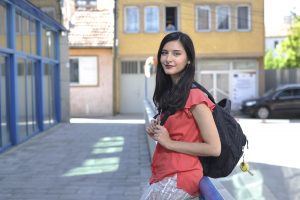 Enis Sahiti, 21, who works in IT at Alpha Solutions, an English-language call center and also as a Network Engineer at Information Technology Services, said that he applied and got a job as a call agent immediately after finishing high school.

“I wanted to start working somewhere, I sent CVs left and right,” he said. “I knew more or less what you would do at a call center, and I’d go to school and work part time there in the afternoon.”

He said that his job at Brighten Group, an English language call center, not only improved his English skills, but also helped him make friends.

“The staff’s relationship to us was perfect, especially the manager. To be honest, I am a gamer, I play a lot of video games, and I would go early to play with the manager for like an hour before work, it was really nice,” he said, not mentioning anything fatiguing about his former job. “The coworkers, the other agents, were also great. They were very friendly people, we would go there more for the friendship than for the work.”

Sahiti worked at the call center for one year before accepting his current, “better,” job.

“For me it was interesting to get a job at a call center as a start. It’s worth working for that money. Many of the students move from other cities to Prishtina, and they have their expenses, why not work to help yourself, your family, you get a bunch of things done with that,” he said.

Beqiri said that, in the future, she would also like to work a job within her field of study.

“Naturally, I can’t imagine myself doing this job all my life. But I’m willing to do it until I finish my studies and find another job… I do want to become a journalist at some point,” she said.

Zyhranaj is in a similar position – his passion is to work in IT, but he had to postpone his studies in order to work and make money.

“University remains essential, but for me it was more important to start working….you need to focus on things that are more necessary during a certain time,” he said, referring to professional and financial independence.

Although he said that working at a call center has earned him friendships and connections, he said that they do not offer the professional development other jobs do.

Georges Labreche contributed to this article.

by Agron Demi
Next: Features