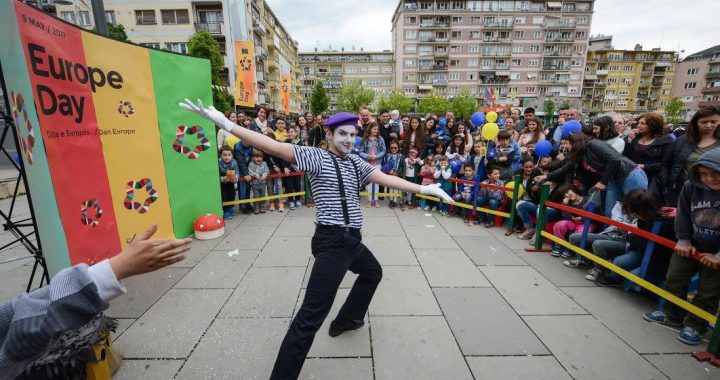 Kosovo’s official calendar includes one of the most absurd holidays celebrated around the world - Europe Day.

When French statesman Robert Schuman presented his platform for a united European community on May 9, 1950, he might not have thought that this date would become a national holiday in a country whose people cannot travel freely to European countries. Only in Kosovo is May 9, or Europe Day, a national holiday.

Kosovo’s efforts to display a European identity can only be surpassed in absurdity by the effort that Macedonians make to display their identity with ubiquitous statues all over the country. By wanting to display a unique identity for the new Kosovo state, state symbols were designed to resemble those of the European Union.

Kosovo’s flag bears the colors and stars of the flag of united Europe. The new, lyricless anthem is titled “Europe.” Europe Day was added to the list of national holidays. The first campaign by Kosovo’s independent institutions to promote the new country was called “Kosovo – the Young Europeans.” Political campaigns and governing coalitions were created under the motto of “A European Kosovo.” Similarly, running with the motto “For a European Prizren,” Ramadan Muja was elected mayor of the city and completed his mandate despite being found guilty for abuse of office. Under the motto “For a European Skenderaj,” Sami Lushtaku was elected mayor, in spite of the fact that he spent his whole campaign and mandate in detention, suspected of committing war crimes.

Conceptualized as a day of integration and a new life, now this day has been turned into a day of absurdity. Today, for the tenth time in a row, Kosovo celebrates. Public and private institutions need to rest from work and join the feast of Europe Day. Although 98.8 per cent of Kosovo’s citizens did not even visit a single EU country in the last years, they must celebrate Europe Day because the Law on Official Holidays says so.

While Kosovo celebrated Europe Day for the first time on May 9, 2009, in November of the same year 16 individuals lost their lives in the cold waters of Tisa, attempting to enter the European Union. During the ten years that we have celebrated Europe Day, 200,000 Kosovars requested asylum in Europe, or 11 per cent of the population. While the European Commission and Kosovar institutions organize a celebration for Europe Day in Prishtina’s main square, thousands of citizens wait in front of embassies of Schengen countries for a work visa, a tourist visa, or even visas for official visits.

At the moment, it seems that it will be easier to take down the Macedonian sculptures in Skopje as part of the negotiations for Macedonia’s new name than to change the Kosovo Law on Official Holidays. Although an initiative to change this law has existed for a while now, it has been blocked because it requires double majority in the Parliament, and all of the communities have conditioned their vote by demanding that their national holidays be included as official holidays in the new law.

Although Kosovars are the most isolated in Europe and at the bottom of the list when it comes to membership, they believe that they will join the European Union the fastest. This unfounded belief comes from poor education, continuous political party propaganda, and the frequent promises of the European Union institutions.

Kosovo’s integration into the EU is the only way. But this will never be reached by taking a day off on Europe Day or by celebrating the holiday of those who do not even celebrate it, just to  show off how European we are. EU integration will not happen with campaigns and politicians who run under the slogan “For a European Kosovo” while being responsible for its endemic corruption.

A website that explains the history and how Europe Day is celebrated provides guidelines as to how to mark this holiday: “If you live in a member country or are visiting one, this is the time to visit European Union institutions….If you don’t live in an EU member state, [you can still celebrate] you don’t have to be in the European Union to do that!” But the site does not tell us how citizens of a country whose statehood is denied by five EU members, and whose citizens are the only ones whose freedom of movement is denied, can celebrate this holiday of “peace and unity.”