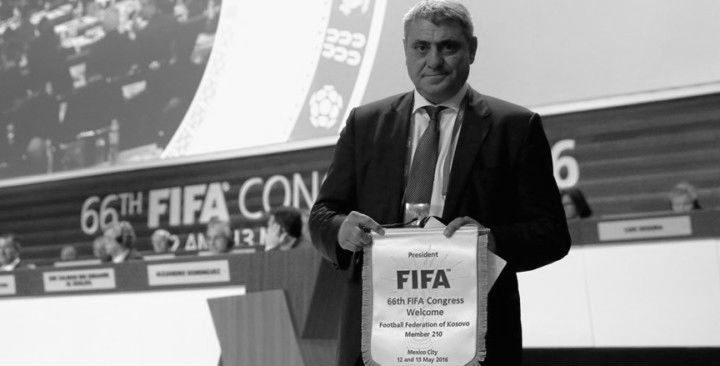 The head of the Kosovo Football Federation and beloved former football player Fadil Vokrri has died of a heart attack in Prishtina today. Vokrri, a Yugoslav champion who enjoyed a successful international career as a player, was 57.

The news of his death was met with shock and sorrow by his colleagues and fans in Kosovo and abroad.

Vokrri was born on July 23, 1960 in Podujevo, Kosovo and started playing football in the mid 70s. He played for local Kosovo teams FC Llapi and FC Prishtina, before joining Belgrade’s FC Partizan in 1986 where he went on to win one league championship in his first season and one Marshal Tito Cup in 1989. He also played for Yugoslavia’s national team between 1984-1987.

In the ‘90s Vokrri played for FC Fenerbahce and a number of French clubs including Nimes, Bourges and Montoucon.

After the Kosovo War in 1999, Vokrri returned to Kosovo to help rebuild his team, FC Prishtina, as its director, and by 2008 he was appointed as head of the Kosovo Football Federation.

During Vokrri’s tenure as the head of the federation, Kosovo joined the Union of European Football Association, UEFA and the global football governing body FIFA in 2016 – both immense achievements for the country’s international recognition in sports.

The news of his death was announced by the Kosovo Federation in a statement expressing their deepest sorrow.

“This news has shocked the opinion at large, and has touched the football community extraordinarily,” the federation’s statement reads.

“Fadil, rest in peace and may your glory be eternal,” reads FC Partizan’s statement .

Vokrri is survived by his wife Edita and his three children. His funeral will be held on Sunday June 10, at 5 pm in Prishtina.