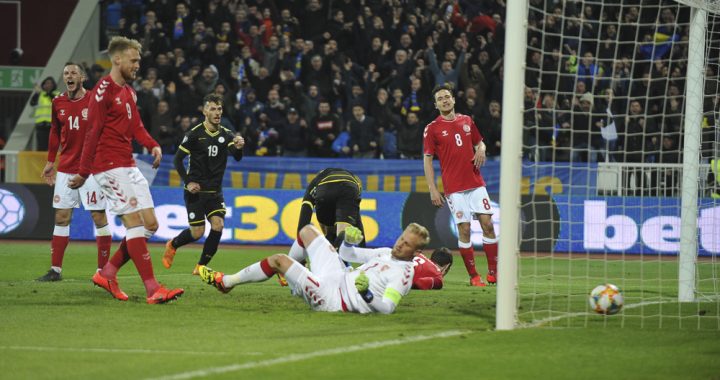 Kosovo extend their exceptional record on the football pitch, holding Denmark to 2-2 draw in a warm up match before Euro 2020 qualification begins on Monday.

On Thursday night Kosovo recorded one of the most remarkable results in its short history in another electric evening at the Fadil Vokrri stadium in Prishtina. Less than three years since the Football Federation of Kosovo, FFK, was admitted into FIFA, its senior men’s representation went toe to toe with the side ranked 10th in the world, drawing 2-2 with Denmark, the Danes needing an injury team equaliser to avoid defeat.

While Kosovo had already gone 10 matches and nearly year and a half unbeaten before last night’s match, an entirely different calibre of opponent has now been held at bay in Prishtina, where Kosovo have still never lost a match.

2018 was a year of building foundations for Kosovo, with UEFA’s newest tournament, the Nations League, giving the team the opportunity to develop against countries of equivalent populations and positions in the FIFA rankings. It was a challenge that was more than met, with Kosovo clinching top spot in their group with 5-0 and 4-0 victories in the final two matches against Malta and Azerbaijan.

However, 2019 will be the year the solidity of those foundations is really put to the test as Kosovo enter the qualification tournament for Euro 2020 alongside England, the Czech Republic, Montenegro and Bulgaria. As Kosovo’s Head Coach Bernard Challandes told the press on Monday, the side “begin from zero.”

The FFK eschewed the opportunity for more prestigious friendlies abroad against Germany or Argentina, instead inviting Denmark to Prishtina to warm up for the qualification campaign. According to Challandes, this was to ensure the best possible preparation for the team’s opening game against Bulgaria on Monday, March 25.

The coach had stated his desire to see his side handle an entirely different type of game, one that would test their defence against a side with world class attackers, their ability to keep the ball against a team not willing to give up possession, and their capacity to create chances against a strong defensive unit.

With the last of these challenges the coach must have been delighted with the results. Kosovo played free flowing attacking football from the first whistle to the last. Despite missing two key players in Hekuran Kryeziu and Valon Berisha, the first half saw Kosovo look confident on the ball, creating the better scoring opportunities and taking a deserved lead through an Amir Rrahmani header.

Even a sloppily conceded second half penalty converted by Denmark’s Christian Eriksen didn’t put the home team off their stride. Just three minutes later a delightfully intricate move eventually found Bersant Celina with space in the penalty area, the young forward composed enough to take a touch to control the ball before restoring Kosovo’s lead. The second strike meant that Kosovo scored nearly as many goals against Denmark in one night than their opponents had conceded in the whole of the previous year.

Without the ball Kosovo had more concerns. Sloppy mistakes quickly led to goalscoring opportunities throughout the game, and the absence of both Kryeziu and Benjamin Kololli left the team exposed and out of shape in the face of Denmark’s ability to move the ball quickly. Challandes, still yet to lose a game after more than a year in charge, conceded after the game that Kosovo had also given the ball away unnecessarily too often, and that his young side had at times lost concentration.

On Monday, the head coach had been keen to play down expectations surrounding the qualification campaign for Euro 2020, stating that his only goal was to confront all their opponents head on by playing attacking football, and not to shrink from the challenge. After the game, he reiterated that setting points totals or demanding certain results “wasn’t his way.”

But results and performances such as this one can only stoke excitement for Monday’s match with Bulgaria, tickets for which sold out in a matter of hours. While Challandes insists that “qualification was not on his mind,” Kosovo’s fans can be forgiven for beginning to dream, their team having elevated to such remarkable heights in such a short space of time.