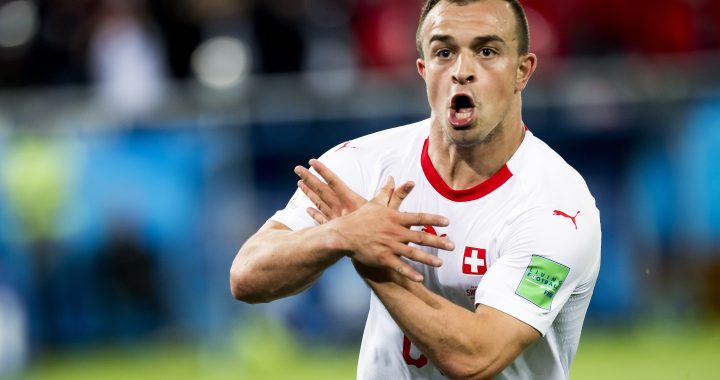 Switzerland's Xherdan Shaqiri celebrates after scoring his side's second goal during the group E match between Switzerland and Serbia at the 2018 soccer World Cup in the Kaliningrad Stadium in Kaliningrad, Russia, Friday, June 22, 2018. (Laurent Gillieron/Keystone via AP)

‘Don’t be afraid of the eagle’ fund to pay Shaqiri, Xhaka penalties

Albanian PM Edi Rama introduced official fund to pay for the fines of the Swiss players who made the eagle-hand gesture during the match against Serbia.

Through a Facebook post, Albanian Prime Minister Edi Rama introduced the official fund which will be collecting money to pay the penalties issued against the Swiss players fined after the Serbia-Switzerland World Cup match last Friday.

The Swiss-Kosovars, Xherdan Shaqiri and Granit Xhaka, each received a warning and a 10,000 Swiss Franc fine by FIFA for “unsporting behavior” during the match against Serbia, which Switzerland won 2:1. The two players, as well as the Swiss national team captain Stephan Lichtsteiner, who received a 5,000 Swiss Franc fine, celebrated the team’s two goals (scored by Xhaka and Shaqiri) by making the eagle-hand gesture, which the Serbian football association found offensive.

The gesture spurred a heated debate online and offline, with people arguing that the gesture represented the Albanian double-headed eagle flag – a symbol of national pride, rather than a nationalist taunt to Serbian players and supporters.

After the fine was announced on Sunday, some Kosovo politicians offered to pay the fines, while other supporters also started a gofundme campaign (over 16,000 dollars have been collected at the time of the writing of this article).

The fund, titled “Don’t be afraid of the eagle’ will be collecting the money to pay for the fines of the Swiss players.

“‘Don’t be afraid of the eagle’ is the title of the bank account in which everyone can offer a symbolic contribution to pay the absurd fine issued by FIFA against Granit Xhaka and Xherdan Shaqiri,” wrote Rama.

“The eagle hand gesture is our distinctive sign of communication in joyful occasions,” Rama continued, before adding that the gesture marking “a totally spontaneous moment of joy” was

Rama’s post also noted that the fund was created after multiple calls on social media to start similar campaigns.