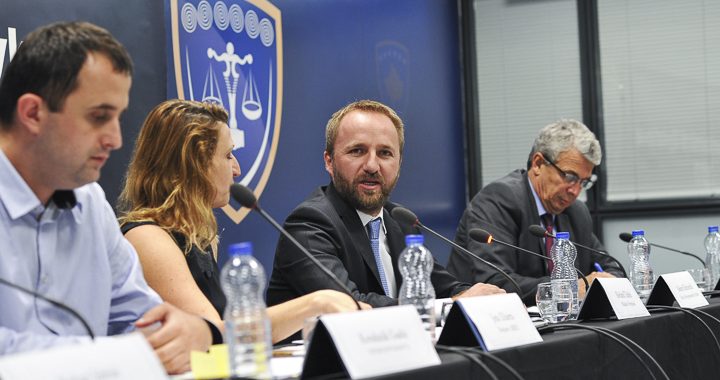 The Balkan Investigative Reporting Network, BIRN, and Internews Kosova published their annual court monitoring report for 2017, for the twelfth year in a row.

Since the first report of the project over 10,000 court sessions were monitored, evidencing hundreds of violations and shortcomings within the judiciary.

The report was presented during a panel discussion on Tuesday during which panelists discussed the main findings, one of which claims that very few corruption cases end with prison sentences.

The participants of the panel discussion were Kreshnik Gashi from Justice in Kosovo, director of BIRN Jeta Xharra, Minister of Justice Abelard Tahiri, Head of Supreme Court Enver Peci, Head of the Court of Appeals Hasan Shala, and Head of the Kosovo Judicial Council Nehat Idrizi. The report was presented by Labinot Leposhtica from BIRN and Internews Kosova’s legal office.

Jeta Xharra, BIRN director, said that the past twelve years of court monitoring have shown both progress and disappointment. She mentioned Xhabir Zharku’s case, the former mayor of Kacanik who was convicted in Kosovo but left the country and did not carry out his prison sentence.

“How do the prosecutor and judge who dealt with the case feel, seeing Zharku evade justice and come back to Kosovo… to run away in front of our eyes and return without even a splinter in his foot,” she said.

Xharra asked Tahiri for his opinion regarding Zharku’s case. Without mentioning his name, Tahiri said that Zharku is the shame of Kosovo and there will be no more cases like his.

“I agree with the British ambassador [Ruairi O’Connell], I cannot even mention his name, the person you refer to is Kosovo’s shame, but such cases will not discourage us from supporting the judiciary. Such cases should not happen again,” he said.

Tahiri also said that he sees BIRN as a partner in his work in the justice system.

Introducing the report, Leposhtica said that in 2017, there were 254 verdicts for corruption cases, but only 32 of them resulted in prison sentences. According to the report, other verdicts included conditional sentences and fines.

“I can say as part of this project we monitored 10,778 court sessions until now. In 2017 we had 254 court decisions or completed cases related to corruption and in only 32 there was a prison sentence,” Leposhtica said.

He added that most cases received conditional prison sentences or fines. Leposhtica said that the report also outlines instances of lighter sentencing and the prolongation in corruption cases.

During the conference, Leposhtica also mentioned some procedural violations by judges, prosecutors, and lawyers which were which were witnessed during the monitoring.

The head of the Supreme Court, Enver Peci, said that in the past 12 years judges and prosecutors have become more disciplined as a result of BIRN monitoring.

“It was a successful project that the courts are not afraid of BIRN anymore, because before people were like ‘Run, because the BIRN people are here’…we’ve become more disciplined because of you,” Peci said.

He then talked about the court monitoring report of 2017. He mentioned challenges, but also the work that needs to be done by judges and prosecutors to improve the judiciary and promised to collaborate on the recommendations suggested by the report.

Hasan Shala, the head of the Court of Appeals talked about flaws in the judiciary, but did not forget to highlight successes.

“There are secret compromises between judges and prosecutors,” he said.

But Shala, who said that he was aware of shortcoming like this, also mentioned achievements.

“All of these flaws and shortcomings are evident, but there are also things in which we’ve made improvements. There were 160 cases related to corruption in 2017, 145 of those were closed during the year, only 15 were left to be finished in 2018,” Shala said.

He then said that the war against corruption cannot be done with earmarked cases, but needs to be perpetual.

Nehat Idrizi, the head of the Kosovo Judicial Council, agreed with the findings of the report. He said that they working on evaluating the judges, and from last year judges have been assessed by a professional commission.

“Last year we started evaluating the judges’ performances, 66 judges have been evaluated, most of them have a positive assessment, only 2 or 3 were negative, and had to undergo further training,” he said, commenting on the report’s findings.

“Regarding the number of judges, in the last year from the 52 decreed judges, over 20 were assigned to the Basic Court of Prishtina, knowing that it is the one most burdened with cases,” he said.

He said that this year alone there have been 112 new job openings. According to him, the biggest number of aides and legal officers were assigned to the Basic Court in Prishtina.

Idrizi also highlighted the lack of supporting staff for judges, arguing that they had an insufficient numbers of personal aides.