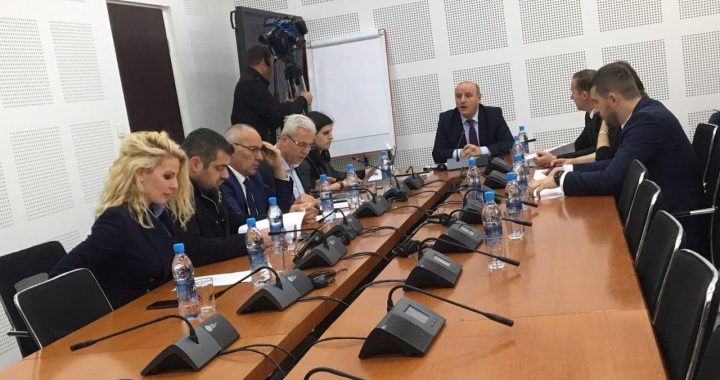 The parliamentary commission in charge of preparing the resolution. Photo: BIRN.

A parliamentary commission approved a draft resolution accusing Serbia of committing genocide against ethnic Albanians during the 1998-99 war, although experts questioned whether it has any practical purpose.

An ad hoc parliamentary commission set up to prepare a resolution condemning crimes by Serbian forces during the Kosovo war approved a draft text on Tuesday and is expected to send it to parliament for a vote next week.

The draft resolution, which BIRN has seen, focuses on accusing Serbia of committing genocide against Kosovo Albanians, alleging that Serbian forces were responsible for over 270 massacres during the war. The resolution also notes that 1,600 persons are still missing from the conflict.

It says that the Kosovo Assembly should propose to make January 15 a Day of Commemoration of Genocide against Albanians in Kosovo, and asks the state of Serbia to recognize that it committed genocide and crimes against humanity.

The resolution also asks the Kosovo government for a law to penalize the justification, minimization or denial of genocide in Kosovo.

“This resolution will be useful for the Kosovo court in the future, as we no longer have EULEX and UNMIK, to start filing indictments and adjudicate; first [to prosecute] individuals who have committed crimes, and also later to prepare an indictment against the state of Serbia,” Bilall Sherifi from the Social Democratic Initiative party, NISMA, who heads the commission, told public broadcaster RTK on Tuesday.

EULEX handed over responsibility for prosecuting war crimes to the domestic judiciary last year, whose predecessor was the UN Mission in Kosovo, UNMIK .

However Bekim Blakaj, executive director of the Humanitarian Law Center Kosovo, questioned whether the planned parliamentary resolution will have any juridical or practical effect.

“This will be a resolution and that’s about it,” Blakaj told BIRN.

“It has become very popular, but I believe that these initiatives that are happening are a justification that deputies are trying to make for their idleness, especially in the eyes of victims on the 20th anniversary of wartime events,” he added.

Commemorations of the 20th anniversaries of wartime massacres have been taking place for several weeks in Kosovo.

“[The resolution] is just a number of actions without any useful value, with the aim of showing that they do not like the course of the dialogue, in other words that it’s not going how they planned. That means that Serbia’s attitude towards this is still respected, and it’s not going to go like they planned, with Serbia recognizing Kosovo,” Dacic said.

Meanwhile, speaker of the Assembly Kadri Veseli has called a meeting about a proposal to create a special tribunal for war crimes committed by Serbia.

But Sherifi argued that the proposals for the resolution and the tribunal should be kept separate.

“We should consider them as two initiatives that can go in parallel,” he said.

The proposal for a tribunal has been raised as prosecutors in The Hague continue to interview former Kosovo guerrillas about alleged wartime and post-war crimes.

The Hague-based Kosovo Specialist Chambers is expected to try former Kosovo Liberation Army guerrillas for crimes committed between 1998 and 2000, although no indictments have been issued yet.