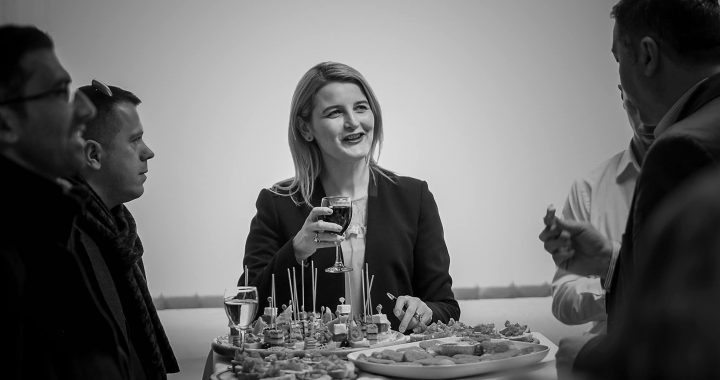 “Cows” and “Political Whoring”: My Salute to Kosovo’s Women Politicians

Kosovar politicians are full of poetry when talking about women’s rights, war widows or wartime rape survivors, but somehow can’t refrain from insulting women and comparing them to animals.

In my professional life, there’s been no place I’ve had disrespect aimed directly at me quite like Kosovo. My mental list of incidents includes snide jokes about my appearance, comments that I must be stupid or uninformed and all the way to threats of lawsuits. If you can’t guess, almost all of these incidents involve Albanian men. Some are older, some are younger, some are uneducated and some are academics, but the haughtiness and sensitive egos are universal. Any woman ready to work in Kosovo and unwilling to be a doormat, get ready: there’s a long line of men out there waiting to tell you how stupid and incompetent you are. If you’re lucky, maybe you won’t be called a whore, but don’t hold your breath. I’m lucky to have had colleagues who’ve had my back, but a dose of intermittent male hostility is a given for professional women in Kosovo.

That’s why I do not envy women who have chosen public life and elected office in Kosovo. I could literally feel a vein in my forehead twitching while watching Vetevendosje MP Aida Derguti be constantly interrupted by two middle aged male representatives of the KLA Veterans Association – in the middle of a speech on the rights of veterans. It’s the exact tone I’ve heard before, countless times over countless interviews and roundtables and conferences, when a man has decided it’s time for a woman to shut up. It’s a tone reserved for women and children, since the same tone would most probably lead to a fist fight or worse amongst Albanian men. That’s why Prime Minister Isa Mustafa has no qualms making public statements about women’s organizations “grazing” on foreign funds. The head of the Kosovo Assembly, Kadri Veseli, feels no trepidation in telling Vetevendosje MP Albulena Haxhiu to “suck” him off in parliament. Vetevendosje member and former Kosovo ombudsperson Sami Kurteshi calls Minister of Justice Dhurata Hoxha a “cow” and a “hyena that cultivates political whoring” with no second thoughts.

These men are filled with poetry when they talk about women’s rights, war widows or wartime rape survivors, but the simple act of refraining from comparing a woman to an animal or to not throw a sexual insult in her direction is too much to ask. May we never forget the delightfully insane outburst RTK journalist Milaim Zeka had on camera in 2010, when he called journalist Liridona Lluka-Gashi a “cow from Denmark,” demanded that he tell her if she had “sexual problems” and informed her that if she were a man, he would hit her so hard her “snot would fall on the ground.” What did the poor woman do to deserve such an outburst? She asked the then head of the Kosovo Assembly, Jakup Krasniqi, about the Fatmir Limaj war crimes trial defense fund. Zeka did apologize of course, when he realized he knew some men from Lluka-Gashi’s family (because it’s one thing to just offend a woman, but another thing entirely to offend her male relatives). I’ve come to expect most men in pursuit of power in Kosovo to carry a little bit of the Milaim Zeka gene.

And if the chosen silencing tactic isn’t hostility, it’s humiliation. Kosovo’s ambassador to the US, Vlora Citaku, receives immense scrutiny for how long she shakes an official’s hand or how many times she pecks an acquaintance on the cheek – while government officials like Ramadan Sejdiu who are forced to resign for sexually harassing school children are given passing attention. In the past year Vetevendosje MP Albulena Haxhiu was subjected to a breathtakingly insulting witch hunt for allegedly smuggling a tear gas canister into parliament by stuffing it up her vagina. In neighboring Macedonia, MP Ermira Mehmeti was forced to leave public life after audio recordings of her having phone sex with deputy prime minister Musa Xhaferi were made public. The political views of these women may be dramatically different, but they sure as hell have one thing in common: a lot of angry men who don’t just want to ensure their political defeat but their utter humiliation.

I wish I knew why so many Albanian men were angry at women. I really do like a lot of them and have meaningful friendships with many of them. Fellow Prishtina Insight columnist Mikra Krasniqi does offer some clues on the origins of this hostility in his great opinion piece called “Why we offend our women:”

“When it’s impractical to do so, or when women are beyond the range of our fists and bullets, we resort to our repertoire of rich insults and slurs that make one cringe. We use metaphors to evoke images that try to strip women of their integrity, their gender, deplore and dehumanize them.”

There’s really only one thing I can add: we’re used to this. It’s definitely becoming less effective to call us cows (heard it before), stupid, or whores (heard it a thousand times before). I do not politically align with most politicians, but I salute the restraint and dignity of Dhurata Hoxha, Aida Derguti, Albulena Haxhiu, Vlora Citaku and many other women who have chosen to work in the land of fragile masculinity known as Kosovar politics.