As Kosovo’s most famous film festival roars back to life following the challenges of the pandemic, its founders recall how it all started two decades ago in the back garden of a ruined cinema.

Pouring rain slightly dampened the plans of a group of cultural enthusiasts on a summer night in 2002 in the southern Kosovo city of Prizren, but did not rob them of their determination.

It was the opening night of the first edition of the Kosovo film festival, DokuFest, planned to be held in the garden of a Prizren cinema, the Lumbardhi, almost a ruin at the time.

“The first night, before the opening, we had unprecedented rain … we were soaking wet and had to leave the garden of the Lumbardhi cinema and go inside,” DokuFest’s artistic director and co-founder, Veton Nukollari, recalls with a smile.

“But we opened it nonetheless and screened the films … 30 films, mainly from Kosovo, a few from Macedonia and Albania, and some from Bosnia and Herzegovina,” he adds.

That first-ever DokuFest lasted two-and-a-half nights, relying on borrowed technical equipment, and an old cinema saved by people who could not forget the summer nights they had spent watching films there under the stars as children.

Fast forward 20 years and DokuFest shows 200 to 300 films a year selected from around 3,000 applications. It has gone beyond being just a film festival and lasts more than one week, from August 6 to 14, 2021.

Now a trademark of the city of Prizren, a festival that intertwines culture with the ancient city includes other activities, including its famous concerts, DokuNights, a mini-festival within a larger concept.

DokuFest started as an attempt to brighten cultural life in what was then a very gloomy post-war Kosovo. There was no specific idea or plan. But over the years it has turned into a key factor powering the development of an increasingly successful film industry in Kosovo.

Displaced, produced and directed by two important figures in DokuFest, was the first film from Kosovo ever to be shortlisted at the Cannes film festival, this year.

“We have created a festival in a city which did not have any functional cinemas and now breathes cinematography … and last year we realized a fully online festival in a country without IP addresses,” Nukollari says.

He proudly recalls the struggle to bring something into life from nothing. “We turned a country that did not produce any films into a country that produces films that win at the most important festivals, like Sundance,” he says, referring to Kosovo director’s Blerta Basholli’s film Hive, which was awarded there in early February. 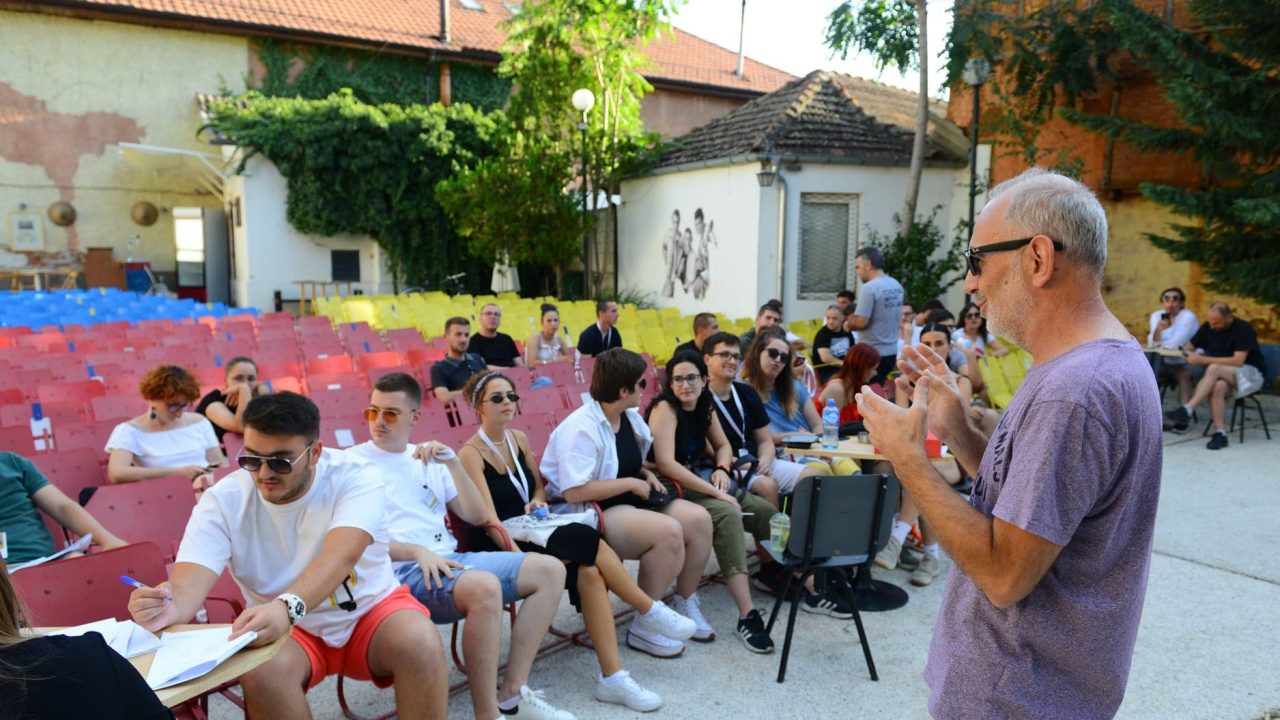 DokuFest artistic director and co-founder, Veton Nukollari, speaks in front of the festival’s staff three days before the start of the twentieth edition, in Prizren, Kosovo. Photo: Courtesy of DokuFest.

Activism was always part of the message

As the slogan of the 20th DokuFest edition – Re:set, Re:mix, Re:act – hints, an important part of the festival’s concept is the call to activism, having started as a voluntary attempt to revive cultural life in postwar Kosovo.

“React is what we always do, a call for activism for a better city and state via personal commitment,” Nukollari says.

Alba Cakalli, current producer of DokuFest, who first was captivated by the festival in 2005, at only 15 years old, says: “DokuFest has taught us activism, not to rest but to rise in protest or make petitions for our vision and against the injustices that occur”.

Sheltering in the shade from the August sun, seated on the windowsill of the DokuFest building, Nukollari tells BIRN that a spirit of volunteerism permeated the establishment of the festival.

“When the festival started, it started on a voluntary basis, with no monetary reward for anything,” he chuckles.

For several years, the organisers had to invest their own salaries from their day jobs to keep the festival alive.

“We believe that you have to give something to get anything in return,” Nukollari explains.

Festival producer Cakalli recalls her teenage years, going door to door to get signatures for a petition to save the Lumbardhi cinema.

The second biggest outdoor cinema in the former Yugoslavia opened in 1952. Before closing its doors during the Kosovo War, it was one of the most popular cultural spots in Prizren. For a long time, it was the only cinema where the films were screened at DokuFest, which now shows movies at some 10 cinemas around Prizren.

In 2007, former Prizren mayor Eqrem Kryeziu attempted to demolish the cinema and turn it into a parking lot. A civil campaign succeeded in protecting the theatre until 2014, when the Kosovo Privatization Agency, PAK, began making plans for its liquidation.

This time, activists grabbed the attention of Kosovo and Albanian politicians, as well 58 supportive NGOs. PAK had to put the liquidation plan on hold, and the Lumbardhi made it to the Temporary Protection section of Kosovo’s Cultural Heritage List.

Cakalli and her peers were active in both civil campaigns.

Unlike Nukollari and his peers, who have vivid childhood memories of the Lumbardhi, Cakalli is from a younger generation that had no such experience. Born in the 1990s, she recalls her childhood as a chaotic time in the midst of war.

“My generation did not experience going to the cinema,” she says, recalling going to a cinema only twice as a kid. Two things stuck in her memory at the cinema: Batman, the first film she saw, with her uncle, and police forces.

DokuFest gave Cakalli and other Prizren youngsters a chance to finally become part of something bigger that “did not harm us”.

Being a DokuFest volunteer remains a source of pride even 20 years on. Currently there are around 50 staff members, more than half of whom were volunteers in their teens.

Nukollari explains that being a volunteer at DokuFest is something that Prizren youngsters cherish, as they do not just volunteer in technical film parts of the festival but in every field. Nukollari notes that those in charge of hosting get to meet important filmmakers from all over the world.

“Being a volunteer at DokuFest has an extraordinary dimension to it,” he says.

Lumbardhi cinema in 2016 (L) and in 1950s (R). Photo edited by BIRN: Courtesy of Faith Bailey and Lumbardhi Foundation

Dealing with the Pandemic

The twentieth DokuFest is returning physically this year after a year when they had to move online to avoid the spread of COVID-19.

They had only 25 staff members that year, Cakalli explains, unlike 2021, when there are at least 100 volunteers, alongside the staff.

Despite having never run an online festival, DokuFest managed it successfully, with 130,000 views of their program, according to Cakalli.

The three phrases of this year’s edition suggest a reset of life, a moment when everyone can think about their surroundings, and look ahead.

The pandemic remains a struggle for the organizers who have restricted their famous DokuNights to smaller music performances, called SonicNights.

DokuKids, which usually includes workshops and events for children, is also limited to only two hours of screening, in line with current COVID-19 measures.

Despite these limitations, to celebrate the first 20 years of the festival, the organisers have included a selection of films from previous editions. They have also remixed previous introductory videos into a modernized one.

The open-air cinemas, including the one over the Lumbardhi/ Bistrica river and at the Prizren Fortress, will meanwhile return this year, continuing a long tradition of movie fans watching films under the stars.

Nukollari attributes the continued success of the festival, which since 2019 has been a BAFTA qualifying festival for short films, to believing in an idea that at first sounded unrealizable.

“A belief that things can be done from almost nothing is part of the essence of this festival, and perhaps of its success,” he suggests.

Cakalli is certain that every obstacle the DokuFest crew encounter becomes worth it when they hear those famous words: “We declare DokuFest open!”

by Serbeze Haxhiaj
Next: News