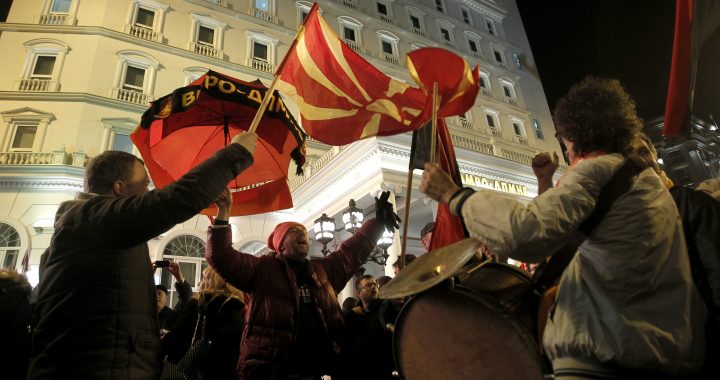 Elections in Macedonia: A shift within the bi-national balance of power

Macedonia's election results have produced a shift in the political balance of power between Macedonians and Albanians within the country, with major consequences for the ruling VMRO-DPMNE and DUI duo.

Ever since the Ohrid Agreement was struck in 2001, as if by tradition, Macedonia’s government would always consist of one of the two winning major Macedonian parties and one of the two biggest Albanian political parties and their minor partners. From the Macedonian parties, it was either the right-wing conservatives Internal Macedonian Revolutionary Organization – Democratic Party for Macedonian National Unity, VMRO-DPMNE, or the left-wing liberals Social Democratic Union of Macedonia, SDSM. From the Albanian parties, it was either Ali Ahmeti’s Democratic Union for Integration, DUI, which includes individuals who led the armed resistance against the country’s government in 2001, or the Democratic Party of Albanians, DPA, which was established by the late Albanian intellectual Arben Xhaferi, who held the reins of Albanian politics in Macedonia during the 1990s.

There is another aspect of politics in Macedonia’s post-Ohrid Agreement environment. And that is the gentlemen’s agreement between the ruling Macedonian and Albanian political parties in the government, which involved the use of divisive nationalist discourse in public, creating a thick line between “us,” the victims, threatened by “them,” the culprits (from both sides). This was especially accentuated during the VMRO-DPMNE and DUI rule, an undivided ruling duo for the most part of the past decade.

But this was only one part of the gentlemen’s agreement, and it was used to amass support by the already national identity sensitive yet plunged into poverty, crowds who would run after their leaders to find refuge and protection from the threatening “them.” This seemed to have worked for the entire decade for this ruling duo. Before I forget, both the Macedonian VMRO-DPMNE and the Albanian DUI represent the nationalist polar side of each of the two largest nations inhabiting Macedonia. So how did this duo work?

It worked mostly because of the other part of the gentlemen’s agreement, which was, what I would call, the “brotherhood in crime” element where both parties staffed the public administration with their already energized party militants, knew of and covered each other’s corruption activities in all levels of governance, and were happy to see their own selves and clans grow (very) rich, as the wiretaps released by the opposition allegedly show. In the end, they winked at each other as a sign of forgiveness for their “necessary” nationalist discourse which helped both of them maintain large cheering–yet much deceived–crowds in public. Both VMRO-DPMNE’s Gruevski and DUI’s Ahmeti were the growing autocrats who would enjoy relentless and unchallenged power within their own national publics.

The recent December 11 general elections put, once again, the ruling duo on top of the list, though by very thin margins, in terms of the number of votes VMRO-DPMNE got mainly from Macedonians and DUI mainly from (if not only) Albanians. Going beyond the simple ranking, for the first time in a decade, the election results have produced a major shift in both nations’ political balance of power within the country, with major consequences for the ruling duo.

It is clear that VMRO-DPMNE was not punished for countless crimes that were continuously exposed in public in the past two years and for keeping the entire country in a gloomy status quo for a decade. In the end VMRO-DPMNE, compared to the last general elections in 2014, came up short by only around 29,000 votes, which is around four per cent lower compared to the total number of votes, and six per cent lower compared to its own votes. The major shift came because the left-wing SDSM, whose leader led the anti-Gruevski campaign for almost two years, exposing Gruevski’s dodgy deals by publicly transmitting the wiretapped materials that he got hold of. SDSM grew by more than 152,000 votes, which is 53 per cent higher than what they got in the last election two years ago.

During his election rally, Gruevski attempted to spread panic against his main opponent, saying that SDSM plans to create a bi-national state between Macedonians and Albanians and risk the Macedonian identity. If one looks at the next day’s news headlines, one would get the impression, it indeed was highly hypothesized that, SDSM managed to amass its votes by appealing to the Albanian public. But looking at the numbers, while SDSM did get some votes from the Albanians (nothing unprecedented), it would be far-fetched to assume that Macedonia’s public is moving into a post-national phase (for the left) or that Albanians are becoming national traitors (for the right). There is still room, therefore, to judge SDSM’s increase in its own right without having to look for answers inside the traditional Albanian ballot boxes.

This is perhaps why many assumed that most of these went to SDSM. But this is not the case. Albanians in Macedonia have reorganized into two other new initiatives, which, while most of them have some newcomers into the political scene, did take some of the old-schoolers within their nests. The less than two years old Albanian coalition formation “Rilindja në Besë” (The Awakening in Trust) received more than 40,000 votes, and the other new initiative “Aleanca për Shqiptarët” (The Alliance for Albanians) received more than 35,000 votes. Both new initiatives took more than 75,000 votes, which is most of what the DUI and DPA have lost. In general, the numbers show that all the Albanian political parties received some 26,000 votes fewer compared to what they all received in the last elections. The 26,000 fewer votes could be explained perhaps by some of them going to SDSM, and some others might have simply not gone to the ballots at all.

Lastly, what struck some of those concerned with Albanian representation in Macedonia is the number of seats they will get in the new parliament. Given the creation of new Albanian political initiatives and the dispersion of votes around them, it seems like the Albanians will have five to six (around 25 per cent) fewer seats in the parliament compared to what they had in the outgoing parliament. Eyes were turned to blame the new coalition initiatives among the Albanians.

Some voices were even suggesting that the Albanians should have rallied under one national platform. This logic is flawed however, not because fighting for one’s national right is a priori repugnant. But it is because the experience in Macedonia tells us that after the 2001 Ohrid Agreement, the ghettoization of the Albanians and the lack of the fulfillment of their rights envisaged in the Ohrid Agreement has mainly come as a result of the two traditional Albanian parties’ “brotherhood in crime” with their VMRO-DPMNE buddies – which suited the latter quite well.

The DUI’s Ali Ahmeti and DPA’s Menduh Thaci have apparently brought their own kin to the point where they could actually gain more politically and have more room to breathe with less representation in the parliament – and that might be exactly because they are going to be represented much less by the DUI and DPA’s leader-driven and leader-benefiting opportunistic platforms.

On the other side, given the very tight results between the two main Macedonian parties, I am afraid the ruling coalition may be influenced (to say decided would be too much at this point) by the meddling of a few foreign powers (from both East and West). Eyes need to be kept open, for whichever decision, the public, both Macedonian and Albanian, should get together and prevent the opportunistic politicians with experience in rubbing various foreign shoulders from taking power and keeping people mentally and physically in poverty.