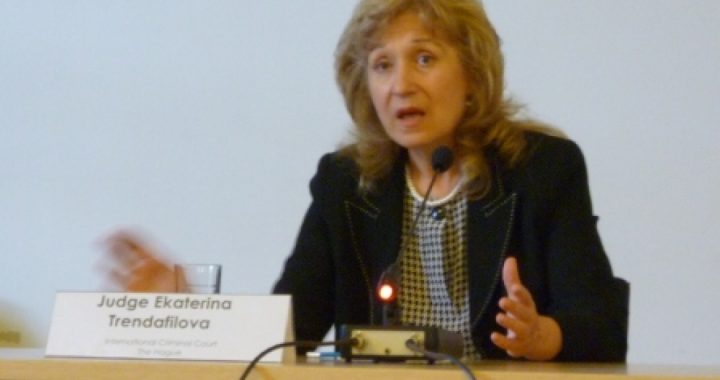 Seasoned Bulgarian judge will preside over trials for alleged war crimes committed by members of the Kosovo Liberation Army.

Dr. Ekaterina Trendafilova, a judge from Bulgaria, has been appointed the President of the Kosovo Specialist Chambers, which is expected to adjudicate crimes committed during and after the 1998-99 war in Kosovo.

Dr. Trendafilova was appointed by Ms. Alexandra Papadopoulou, Head of the EULEX Mission in Kosovo for a four-year term starting January 2017.

According to the Specialist Chambers, there will be only one full-time judge, while all others will be drawn from a roster and engaged when needed.

Prior to serving as a Judge of the International Criminal Court, ICC, from 2006 to 2015, Trendafilova was a professor of criminal justice at the Sofia University, a Deputy District Attorney at the Sofia District Court and provided expert opinion in criminal law and human rights standards to the Bulgarian Parliament, Supreme Court and number of Bulgarian ministries, according to a news release from the Specialist Chambers.

“I am truly honoured to have been appointed as the first President of the Kosovo Specialist Chambers,” she said in a statement. “At this decisive moment in the early existence of the Specialist Chambers, I feel privileged to have been entrusted with the leadership task. I recognize the immense responsibility to ensure that the Specialist Chambers apply the best judicial practices and deliver fair and impartial justice for those brought to account, as well as the victims of the crimes allegedly committed. I intend to accomplish this mission independently, with determination, vigour and to the very best of my abilities. It is vital that we implement our mandate in an efficient, professional and secure manner.”

The new court, which has been years in the making, will be located in the Netherlands but function under Kosovo law, though all of its judicial and administrative staff members are to be foreigners. The chief prosecutor of the Specialist Prosecutor’s Office, Daniel Schwendiman, is an American.