Elections in the stronghold of a divided party

Snap election in Drenas, a bastion of PDK, have left the party reeling as its own members distrust leadership choices and are running as independents.

Traveling by minivan in Kosovo is much more efficient than by bus, which apart from the delays and the frequent stops, makes the trip seem like an odyssey.

Drenas is located 41 kilometers west of Prishtina, and one could anticipate that such a trip would entail a thorough investigation by passengers and drivers en route. This time it is different. The only thing the driver says is “yes, they know their business,” referring to the early elections in Drenas which will take place on December 4, 2016.

The Central Election Commision has certified eight candidates. The list contains five candidates nominated from political parties, while three are running independently, though they used to be part of the Democratic Party of Kosovo, PDK, the biggest party ruling Drenas since 1999.

The silence and tension in the city is palpable. As soon as the waiter sees my notepad, he promptly says “Please, no politics, the world is beautiful without politics.”

No one agrees to speak to journalists, or if they do, only anonymously.

Drenas was a KLA stronghold and also a historic heartland of the PDK. In 2013, PDK won the local elections in Drenas with 64 per cent of the popular vote, while Initiative for the Future of Kosovo, NISMA, a favorite in this cycle, gathered only 24 per cent. 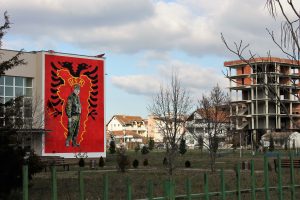 Solidarity towards the families of martyrs and veterans of the 1999 war among the local population remains. A five-meter mural of Greater Albania and a slain KLA fighter fills the wall of a school in the town’s center, dominated by low, mostly grey buildings, typical of brutalist Yugoslav architecture.

Across the street, cafes teem with young people. The barman explains why he chooses not to disclose his identity. “It is dangerous. With the high rate of unemployment, criticism could lead to labels which could in turn cause repercussions in work, family, or society,” says the thirty-something.

“When I come to work in the morning, I see only a few people who go to work, the city is empty. This indicates unemployment better than any other statistic,” he says, chuckling.

Friendliness between the candidates

Xhavit Drenori, an independent candidate, walks the streets of Drenas, greeted by people left and right. Some even call him “mayor” in support of his bid to become Drenas’ next mayor – although since these are snap elections, he would serve for less than a year.

The race is tough. Drenori and the other candidates see these elections as a test-run for regular local elections planned for 2017.

As we stroll, Drenori runs into Elmi Thaci, a mayoral candidate for the New Kosovo Alliance, AKR, who seems to be in a hurry. They exchange hearty greetings, as is the custom in Drenica, a region in the heart of Kosovo with a long legacy of guerrilla rebels who have shaped the Albanian national resistance through centuries.

The tension exuding from people who refused to talk seemed entirely irrational upon seeing the candidates talking to one another cordially. Moreover, the headquarters of the main parties are practically located in the same building, no further than 200 meters away from one another.

Drenori, a PDK MP in the local assembly, is a full-time German language teacher. He began tutoring privately in a modest space after he finished studies in Germany. Drenori disagrees with his own party’s candidate and chose to run as an independent. 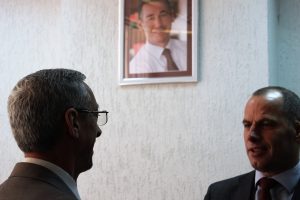 He opposes the current party leader Kadri Veseli’s decision to “arbitrarily choose Ramiz Lladrovci, who is not experienced in local governing, as the party candidate.”

Drenori knows that he is running up against a well-established party structure in Drenas, but insists that he is bringing “a new method of doing politics,” learned during a training in Germany’s Bundestag in 2008.

“I worked with a German MP and I saw how he constantly worked with the citizens and treated his campaign days as normal work days. I did the same thing these past three years,” explained Drenori. He also promises to prioritize education and create a commission to verify teacher quality in the municipality.

He is convinced that he can win, but says it is important for him to be “original, like I believe I am supposed to be.”

In front of his German class is the office of the candidate from the Democratic League of Kosovo, LDK, Bedri Nika. He comes out and also gives Drenori a friendly handshake.

Like Drenori, Nika thinks that the atmosphere is quiet with regards to elections. “LDK was warmly welcomed by citizens. They do not openly talk about who they are voting for,” Nika says.

He accuses PDK, the party who has been in power in the municipality from 1999 until now, of corruption and poor governance and thinks that the citizens have had enough. 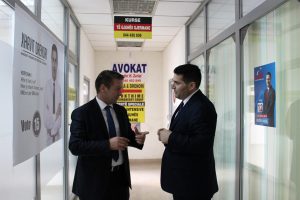 But the new mayor will have little space for manoeuvring. The 2017 budget has been approved, so whoever is elected has little to do but to implement the plan, which is perhaps why no one is making big promises except to be honest and use public money conscientiously.

NISMA, a party established in 2013 after high-profile PDK MPs – including Jakup Krasniqi, a Drenas native – decided to break away from PDK, are currently considered the favorites of the election. Their offices are also close by.

Mehdi Thaci, one of the people responsible for NISMA’s candidate Isa Xhemajlaj’s campaign in Drenas, says that members of his party have received threats from PDK. “We constantly receive blackmail from PDK,” says Thaci. “We are not interested in taking the votes of others.”

The energy of mobilization can be felt in PDK’s office. Its candidate for mayor has generated reactions within the party, which led to members Naim Bazaj, Rrahim Elshani, and Drenori to run as independents. After a meeting with Veseli, Bazaj and Elshani asked the citizens of Drenas not to vote for them despite the fact that they are still in the running, claiming they themselves will vote for Lladrovci – toeing the PDK party line.

For the past three years, Lladrovci, PDK’s candidate, served as Kosovo’s ambassador to Albania. A few weeks ago, he resigned, came back to Kosovo, and was chosen as a candidate for the mayor of Drenas.

“I became ambassador because my party delegated me and I do not shrink from responsibility,” says Lladrovci, whom I met in the PDK office in Drenas. PDK’s office is obviously the most expensive of all offices and it is decked out in kitsch.

“The citizens of Drenas gave me their help whenever I needed it. It will be a privilege to return that support through work as the mayor of Drenas,” says candidate Lladrovci.

Unlike the other candidates who are focused on education and other fields, Lladrovci says that the first thing that he will do as mayor is “meet with the families of the veterans and martyrs, because they gave a lot for Kosovo. We will remember their sons and daughters.”

As far as new projects go, Lladrovci says that they might happen in June of next year, but believes that his job will consist of mainly finishing current projects.

Nevertheless, he believes that these elections will augur future results for the next five years. 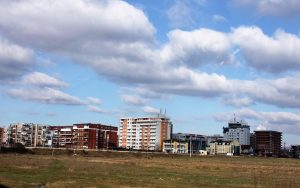 Veseli, who became party leader in March after longtime leader Hashim Thaci was elected President, is eager to prove that PDK’s voter base remains unshaken. These elections could be seen as a test of his power because they are the first after his ascension to the head of the party. Recently, PDK lost leadership of the municipality of Mitrovica. Another loss, especially in the middle of Drenica, would not augur well for the party’s chances in national elections.

Lladrovci says that he has full support in the next “five-year long mandate,” as he sees the next term to be a key to the one that will come after.

“My opponents are afraid because as soon as I assume power in Drenas I will develop it a lot, and they will not be able to come close to governing the city,” says Lladrovci with determination.

“I am telling you that during my five years of office I will bring 70 million euros of capital investments to Drenas,” says Lladrovci.

These kinds of promises are customary during municipal elections in Kosovo, yet they usually go unfulfilled. Nevertheless the presence of assembly speaker Veseli in the rallies, and PDK members running on independent tickets, indicates a fall-out within the largest party in Kosovo.

“The act of going as independent candidates [Drenori, Bazaj and Elshani] from their party PDK shows the discontent within the party structures which might reflect on the election results,” explained political analyst Imer Mushkolaj.

Civil society activist Besa Luzha, who is a regular commentator on current affairs, believes that the possible loss of PDK in Drenas is “a symbolic and psychological defeat for PDK as whole, which seems to be disrupted anyways”

According to Luzha, the current elections in Drenas are also a manifestation of the party’s need to clarify its leadership.

“Kadri Veseli, the actual formal party president, probably sees these elections as a test of his leadership. He wants to prove that he is the actual leader of the party, not his predecessor Hashim Thaci, the actual President of the Republic,” says Luzha.