One of Kosovo’s FIFA listed match officials reveals how concentrating on matters on the football pitch, both as a player and as a referee, has helped him cope with great adversity.

In August 2018, less than a month before he was set to travel to France to officiate a qualifying match for the European Under-21 Championship, Fatlum Berisha suffered a tremendous shock. He lost his 10-year-old son, Dren, in a tragic traffic accident in Fushe Kosove.

The loss of his son, who was following in his father’s footballing footsteps as part of the Fushe Kosove under-11 team, left indelible traces on the memory of Berisha, his family, and the whole football-loving community of Kosovo.

Berisha was uncertain whether he would have enough strength to go to France and assist Kosovar referee Genc Nuza in the match between France and Luxembourg. His uncertainty was even shared by UEFA.

“The truth is that I was invited to Strasbourg by the Commission Delegation and was asked what I thought,” says Berisha. “I said that I had made peace with myself and I am aware that there is no turning back.” 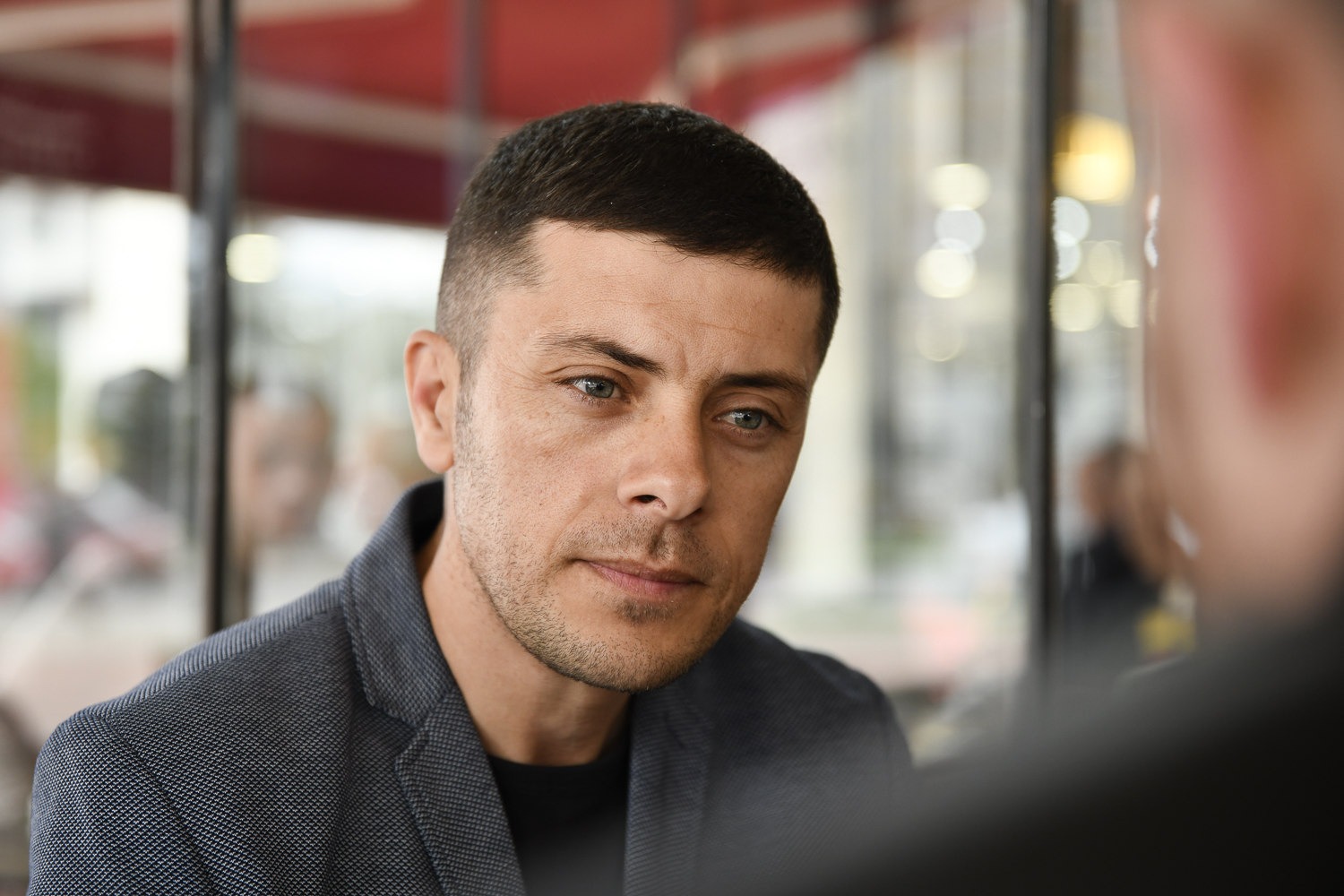 According to Berisha, football has helped him to withstand the loss of his son, while also stressing that the contributions of others in the community has also eased his family’s suffering. “I am obliged to thank all of Kosovo,” he says. “There were many people that have comforted me, that were part of the burial ceremony and have continued to support me after the tragedy I suffered.”

The pain endured after suffering a family tragedy such as the one experienced by the Berisha family is not easy. But it is sport and dedication to it, as in Fatlum’s case, that shows the importance of overcoming tragedy, and the common spirit of the sporting community to support its members during periods of mourning.

Indeed, Berisha’s own relationship with both sport and painful memories has a long history. Two decades ago, Berisha and his family found shelter as refugees in camps in Macedonia (now North Macedonia), one of the thousands of Kosovo Albanians who fled their homes due to the Serbian regime’s attempts at ethnic cleansing.

The Berisha family eventually flew to Sweden, where they stayed as refugees for a year. While there, Fatlum immediately began to emerge as a young footballer. “I played for FC Vingaker’s junior team for six months, and for the B Team at the same club for another five months.”

It was in Sweden where Berisha also received his first taste of officiating. “One time, with the under-19 category, they said: ‘Would you like to be referee?’” he reveals. “That was my first step as a referee. I didn’t even have my own whistle. It was a coach’s whistle that he used in training sessions.”

Just as a football game consists of two halves, so has Berisha’s life. Once returning from Sweden, Berisha joined the Fushe Kosove football team in 2000, beginning a new phase of his post-war Kosovo life as a footballer.

Two years later, he recalls that it was a poor refereeing performance during a match that sparked the desire to have another role on the football pitch, that of a referee.

“It all happened accidentally in a match in 2002,” he reveals. “I was playing at the time, but I went to see another game. One of the weaknesses of that match, as I perceived it, was the refereeing. It was not at the right level, and there were many shortcomings.” 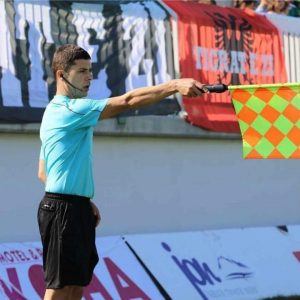 Berisha was uncertain whether he could simultaneously be both an active footballer and a referee, but the only stipulation was that he could not officiate matches in the league in which he played. “My first match was as an assistant referee in a match between ‘Luftetari’ from Gjakova and ‘2 Korriku’ from Prishtina, back in 2002,” he explains.

Back then Luftetari v. 2 Korriku was a Fourth League fixture, but Berisha soon advanced from refereeing the Fourth League up to the Third and Second League of Kosovar football. In 2006, he completed the second exam for referees, which gave him the opportunity to become a referee in the most senior league of Kosovo football, the Kosovo Super League.

But a match between Llapi and Fushe Kosove in the same year would impact on his career as both a footballer and a match official. “During the game, one of the players went in for a high tackle, with his studs off the ground, and broke my leg,” he says. “For a year, I missed being part of the game as both a referee and as a footballer.”

The incident left a big scar on his career as a footballer, but Berisha feels that being a player for all those years gives him an advantage over his colleagues who did not play football. “When a player falls down, or when he simulates his reactions, I am able to notice it much easier compared to those referees that were not players at all.”

In post-war Kosovo, the job of a referee has often meant dealing with violent scenes on the football pitch, with even referees themselves becoming targets for physical assaults. Berisha claims that he has never been physically attacked, although, inevitably, there have been complaints made against him.

The 38-year-old thinks that there is a tendency to see referees as flawless. “[Being a referee] does not mean I’m infallible. I make mistakes because I’m a human being,” he says. “There is an unwritten rule about refereeing, and we quote it very often: ‘A good referee is one which makes the fewest mistakes within a match. There is no infallible referee.’”

However, complaints against referees goes beyond Kosovo’s borders, even permeating the international football arena, where Berisha has serious intentions.

Kosovo’s admission to UEFA and FIFA in 2016 opened a new page for footballers, as well as new opportunities for Kosovar referees. In 2017, three officials, Genc Nuza as a referee, and Fatlum Berisha and Bujar Selimaj as assistant referees, were included in FIFA’s International List of Referees, making them eligible for officiating international fixtures.

On March 17, 2017, the Kosovar trio debuted at their first international match, a friendly between Turkey and Moldova, played at the Eskisehir Ataturk Stadium. Berisha describes this appearance as unforgettable for the Kosovar trio, who officiated in front of more than 30,000 fans.

International competitions have also dynamised Berisha’s career. From May 3-19, he will be in Ireland for the European Under-17 Championship, the only official selected from Kosovo among the 20 international referees who will be part of the tournament. 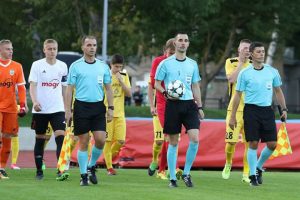 Officiating at an international level has certainly made an impact on his concept of different ways of refereeing, with Berisha deployed as assistant referee, but he believes that the physical side should still be at the highest level. “If you’re not physically fit, you cannot be close to the action,” he explains. “When players are physically prepared above your level and the ball goes very fast, then the probability of mistakes is too great.”

Berisha has a rigorous schedule to ensure good physical preparation minimizes any potential refereeing mistakes. “I do exercises when there is a match ahead,” he says. “I do five days of training and, including the match itself, that is six days of training per week.”

In addition to the physical aspect, psychological preparation plays an important role. Berisha says that his good mental preparation has helped him reach a high level, even after the tragedy he experienced. According to him, the main reason he has been invited to the European Under-17 Championship were his good performances in Turkey during qualifying matches for the competition in October 2018.

The loss of his son left him in great pain, but Berisha is convinced that he should continue his refereeing journey despite the trauma that is still troubling him. “If I was emotionally and psychologically loaded with the loss of my son during my refereeing back then, I guarantee that I would not have the invitation for the European Under-17 Championship today.”

by Youp Kruithof
Next: News

Hotel in Mitrovica collapses, killing one