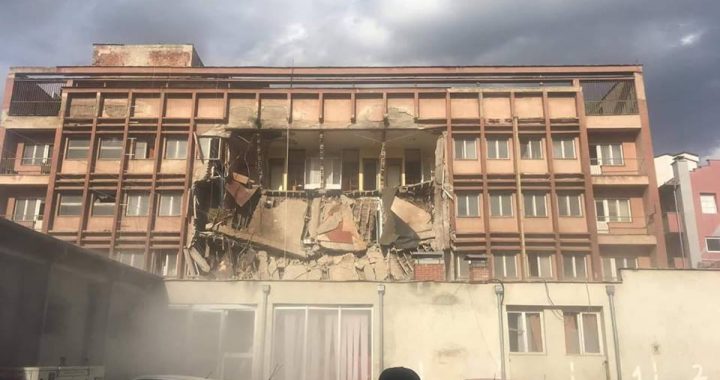 The rubble of Hotel "Adriatiku" after the accident. Photo: BIRN.

Hotel in Mitrovica collapses, killing one

The Hotel Adriatiku in Mitrovica collapsed during the night as it underwent renovations on Monday, killing one man who was discovered in the early hours of Tuesday morning.

A building in Mitrovica that was undergoing renovations collapsed on Monday, killing one man.

The Kosovo Security Force, KSF, was called to the building, a former hotel named Hotel Adriatiku, late on Monday evening. After six hours of searching the rubble, the body of 28-year old Visar Behrami was discovered early on Tuesday morning.

According to the police, four employees were working on the premises at the time that the accident took place. While three managed to escape, Behrami was trapped by the rubble.

“I call on all authorities to accurately investigate all the circumstances of this incident and bring those responsible to justice,” Haradinaj wrote on Facebook on Tuesday morning.

On Tuesday, family members of Behrami confirmed to BIRN that Behrami did not have an employment contract, and he was working time to time for the company that was in charge of the renovations. The name of the company has not yet been made public.

Two people have been detained by Kosovo Police for the next 48 hours in connection with the case, known only as A.H. and Sh.H.

In a press conference on Tuesday, the deputy mayor of Mitrovica, Faruk Mujka, announced that the municipality created a commision to investigate the building’s collapse.

“We have today formed a commission within the Departments of Urbanism, Emergency and Inspection, which should be able to tell us about the situation on the ground, draw some conclusions and explain what steps that Municipality of Mitrovica should take,” said Mujka.

Mujka further added that the report will be handed over to the prosecution and Kosovo Police once completed.

“This building has been privatized since 2005 and until now has been non-functional. Yesterday, through unofficial channels, we discovered that work started here throughout Sunday and Monday,” said Mujka. “No permission [to undergo the renovations] was issued by the Department of Urbanism.”

In the last 16 months, 25 workers have died at their place of work in Kosovo, including Behrami. The Labor Inspectorate has been criticized for the low number of inspections nationwide, particularly in the construction sector, which is alleged to have led to an increase of deaths at the workplace.

In the last five years, there have been nearly 100 recorded cases of people dying at work, the majority of these deaths occurring on construction sites across the country. The high number of recorded deaths sparked protests last October in Prishtina, demanding an improvement to working conditions on construction sites in Kosovo.

“One of the most concerning things is that the number of inspectors is 42. With 42 inspectors, they aim to cover the whole of Kosovo. We demand that there are more inspectors before 2019,” said Kushtrim Mehmeti, the organizer of the 2018 protest.

Basri Ibrahimi, the head of the Labor Inspectorate at the Ministry of Labour and Social Welfare, said that municipal authorities are responsible for the inspection of building safety in cases such as Mitrovica.

Ibrahimi confirmed to BIRN that a detailed report from the Labor Inspection will explain the circumstances of the collapse of the building that led to Behrami’s death.