Meet FEMaktiv, a group of young feminists who are challenging traditional gender roles and highlighting struggles that women face everyday in Prizren.

Taking the bus to Prizren is never a particularly comfortable experience. Aside from the long drive and the inevitability of overhearing unwanted conversations, what is often most noticeable is the music that is blasted through the speakers of the shoebox-sized TV screens: local popular hip-hop – sometimes referred to as shqip-hop – is a space where women are habitually disparaged, reduced to mere objects and seen as status symbols. Although many Kosovars have been desensitized by the repetitive and tasteless rhymes, others see the behavior towards women in the popular music industry as an overt symptom of their general discrimination in the country.

Indeed, taking a stroll through Prizren never ceases to be enjoyable and beautiful: the pretty mosques and churches, the gentle gush of the river and the children giggling as they play tag around the Shadervan. Prizren is beautiful, but visibly affected by patriarchy: cafes are heavily populated by men, and women disappear from the streets at night. Still, what is also just as exciting, yet cannot be felt at first glance, is the enthusiasm and will of budding local groups to improve their community.

One of these groups is FEMaktiv, the first youth feminist initiative in Prizren. Started by 15 women, FEMaktiv is made up of a diverse group of activists working to raise women’s voices in Prizren and its surrounding villages.

“We got together because of the situation; because women in Prizren are virtually absent in public life, decision-making and their voices are not heard,” said FEMaktiv member Tringa Kasemi.

Tringa, who studied law and works at the Lumbardhi Foundation, along with her sister Ardita, PR manager at Dokufest, Valmira Morina, a psychologist, and Feray Dervis, an architect, met me on a calm afternoon in Prizren to talk about their initiative.

“We are the first generation of rebellion. While for example,  in other European countries the grandparents of my peers rebelled against traditions, in Prizren, we are the first generation to do so,” said Tringa. “We are lucky because we are supported by our families in life, because many here are not. There are fathers who do not let their daughters express their thoughts out loud, even in the family.” 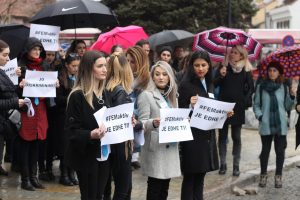 Having had their first public appearance on March 8 of this year, Kasemi said that one of the main goals of their initiative is to tackle patriarchal attitudes about women in their city and to increase awareness about women’s issues.

“Women here cannot show themselves because they are not given the space to do so,” said Tringa as we have coffee with three other FEMaktiv members at a cool local cafe. “We have realized that the problem is more significant in our city than in, say, Prishtina; we are a more traditional community.”

Tringa, who works at the Lumbardhi Foundation, said that they have had informal meetings since February, but did not expect to come out publicly as quickly as they did. Though they started out with 15 members, they now have 40 active volunteers.

“When we saw the enthusiasm of the women and girls who came to our meetings, we knew we were ready,” she said.

Their first activity, a march held on Women’s Day called “8 March with Ties” (8 marshi me Kravate), aimed to challenge the patriarchal mentality and discourse in the city. The participants wore blue ties to show that women can also wear them, and that they are not a sign of power.

“Although it was rainy that day, people joined our march, they were curious to know who we are and what we do. Prizren has never seen anything remotely resembling a march or protest on March 8. People here think that Women’s Day is only for celebration,” said Ardita Kasemi, Tringa’s sister and a PR and Marketing Official at Dokufest. 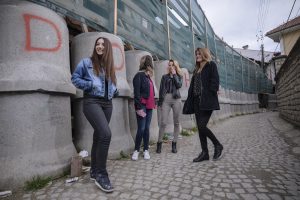 While in Prishtina activities and protests for International Women’s Day have been regularly organized in the past couple of years, Kasemi said that even local government officials in Prizren were incredulous.

“That day when Tringa and I went to the municipality to get a permit to use public space, one of the men at the municipality asked me ‘What are you doing here! Get out and celebrate!” Ardita explained, humorous and critical at the same time. “Also, there were no women there [at the municipality] that day because they were apparently given a day off and went to the beach town of Durres, Albania; it is a discrimination of its own kind.”

“If we don’t start promoting ourselves, I don’t think that a man will come and do it for us,” Valmire Morina, another member, chimed in.

Their second public activity, which was held on International Worker’s Day, tackled the current position of women in academia and in the workplace, but also the violations that are committed on a day-to-day basis to workers in general.

“On May 1, we went to the center and handed out ‘contracts’ that contained their rights as workers, the violations that are done to them and laws that protect them. We wanted to let people know that there are mechanisms that protect them in the workplace,” said Tringa. “We felt like we needed to do something, but on principle, we did not want to go out and protest. I am very much pro protests, the world has changed through them, but we are not getting where we want to with traditional protests, going out, shouting and going home.”

Tringa said that there are many problems that women face when it comes employment and career choice.

82 per cent of women in Kosovo are not active in the job market. At the Faculty of Education in Prizren, Tringa said, women make up 91 per cent of the student body. “Primary education is considered a women’s career here. You work until midday and then you have time to cook lunch, look after the children and do chores,” Tringa said. “You are impelled to choose your career based on your gender.”

Although the performances were not massive, they attracted quite a lot of people and did manage to raise some awareness. “We saw that many people are not aware that they can publicly access things like the Constitution or the Law on Labor online – we at least achieved to tell people that,” said Ardita.

“Considering that municipal elections are almost around the corner, we have started monitoring the municipal assembly sessions in Prizren, and we will also go to board meetings and the office for gender equality,” she said. “Currently, out of the 13 directorates in the municipality of Prizren, only two are led by women.”

Morina said they are planning their next activity, a public performance about gender roles and housework.

“It will show people that not only women, but men can do housework too. We don’t want to put men on the spot or berate them, we just want to show that it is normal for men to help their wives because gender equality starts at home,” she said.

Considering themselves a ‘community initiative,’ FEMaktiv have managed to gather an ethnically and religiously diverse group of people that believe in changing their community.

“We are tired of raising civil awareness. We want to work with the citizens. We don’t want people to see us as know-it-alls. We want to get together and try to change something, because no one is pleased with our current mentality, but people are also not speaking up,” concluded Tringa.

by Genc Kadriu
Next: News