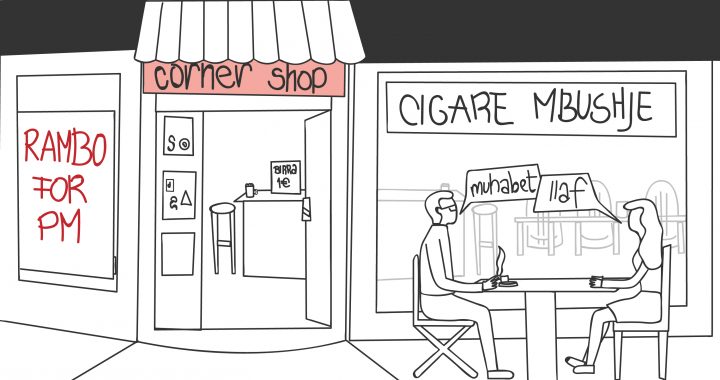 Corner shop is my autonomous zone in the matrix of mainstream media where we can comment through the apparent and the implicit about Kosovo and beyond.

In today’s Cornershop we look at the new reshuffling of our kings and saviors in the ever precarious present of political apathy.

It is Tuesday evening and I find myself cornered by a media charade as the countdown for the deadline for establishing coalitions unfolds. We see spokespersons from the parties most of us had never seen before, creatures from the underground catacombs of parliamentary industry, spilling out and up from the holes in the ground, forming swarms in a twilight of media coverage. Shine and be chosen, their response to journalists is that of preschool children when asked what they want to be when they grow up: “Change our country for the better!”

A young and soft-spoken gentleman from the AKR, I can’t remember his name, but he once ran for our city, seems alright. At least he’s moved on from “changing the country for the better” to “applying reforms.” He mentions the problem of air pollution, but can we trust him coming from the same basket of that thing called “Alternativa”, Lutfi Haziri and Ferid Agani’s deserters.

Kadri Veseli’s campaign is  power incarnate; he speaks like a restaurant manager in a staff meeting, looks like a fireproof effigy and an avatar of something very shady. And then the real horror of a bitter truth strikes at midnight: a coalition between PDK-AAK-NISMA. A wake-up call through the hollowed spectrum. The leader of Malisheva’s independence from Drenica gone full circle. Gllogjan’s hero, a proper sell out.

Across the fence, Behgjet Pacolli looks like a sedated Donald Trump. His usual spin, a patriotism with a rubber duck face, sat on the rim of Putin’s bathtub. While Isa Mustafa, the man who got sacked by the majority of his Assembly only last week on the charges of distrust, is our uncontested winner in a display of exemplary character. People still think he is smart! And that’s worrying.

All these Kosovo political parties have one thing in common: they all lack transparency within their structures. They are all ridden by conspiracy, rabid by rank and poxed by paranoia. The political analysts and commentators seem so mashed-up on hard drugs that all I can say to them is: Take me to your dealer!

Then the fog clears and a modernist villa appears. Vetevendosje’s headquarters, self-determined behind fortified walls, a clear sign of a moving up in a world of bling politics, frugal beginnings now the stuff of legendary past. “Together it is possible” going solo. Opening our eyes to a sombre, but real future, to a dream that’s also not a lie.

So, would you give a vote to a man who says: “Our party will save the political life from those who raise and destroy the state after their own party’s whims and interests?” Or would you rather ask: What is he doing there, the little hypocritical power junkie? Would you vote for an iron-faced new-money developer who lives in a fortified villa over a sea of poverty, or a man with titles prefixed before his name, lacking vision and minimal charisma? But you also do not want to vote for a sell-out hero, now, do you?

This election, we mustn’t forget, is  a result of a plotted takedown of the government. Paradoxically it would be only natural that it can’t, and won’t, be an election directed towards the needs of ordinary people. It’s bad spending and alas, to sum it up, it is nothing more than a nervous breakdown with a missed opportunity for a shake-up.

First and foremost PDK isn’t simply a party, but a political standpoint, a state of mind, a system of post-war legacy. An ideology of apathy toward ordinary people, a cozying up to a handful of comprador nationals and opportunistic internationals. LDK is PDK of Llapi, AAK is PDK of Dukagjini, and so on. Therefore, the enemy on the horizon isn’t PDK, but all the other parties showing their true faces. PDK’s Machiavellian message to the opposition, whatever’s left of it, first with Isa and now with Ramush and Fatmir, is: You’re next! To the Kosovar free-thinking politically-correct press, its illuminating intelligentsia, civil society and the committed poets. I simply say: Arbana Xharra.

On June 11, Cornershop, out of desperation, is going to vote Vetevendosje!, because we will not be able to move even one single stop forward unless we see it for ourselves that they too aren’t better in a system that’s out-dated and destructive.