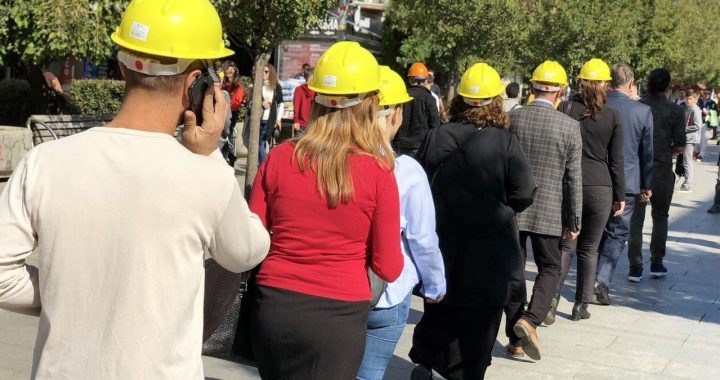 Protesters marching in Prishtina towards the building of Kosovo Government. | Photo: Kallxo

The Kosovo Democratic Institute criticized the lack of protection for employees in the private sector and high rates of workplace deaths in a press conference on Tuesday.

In a press conference held on Tuesday, Florent Spahija from the Kosovo Democratic Institute, KDI, raised the alarm on the poor working conditions of employees in the private sector, particularly those in construction, calling on the government and other institutions to take measures in improving safety and protecting workers’ rights.

Spahija focused particularly on the rate of workplace deaths that have occurred, an issue that has sparked protest in Prishtina in early October, when a protest was held to raise awareness of the death of 93 workers in Kosovo’s construction sector in the past five years.

“The phenomena of death at work has increased in the past years, because of the boom in the construction industry in each part of Kosovo, and the opportunity to get hired without any qualification in this sector,” said Spahija.

From January this year up to October 2018, 18 people have died in the workplace, marking one of the highest death rates in the region. Protesters carried safety helmets as they marched towards the Kosovo Government building to protest the conditions at work and the negligence of the Government to more strictly inspect the working conditions and safety at work.

KDI especially highlighted the negligence of the inspectors failing to prevent death at work. Only 42 inspectors cover the whole territory of Kosovo. Among others, KDI suggested that the Government of Kosovo should increase the budget that would ultimately increase the number of inspectors, resulting in more inspections.

Spahija also noted other problems that employees in the private sector face on a daily basis.

He stated that workers in the private sector reported many cases when they were fired without notification, when employee working hours were not respected, unpaid overtime, the cutting of salaries without notification, being paid less than minimum wage, delays in the payment of salaries for up to three months, the lack of pension contributions and lack of free days at the weekend, during official holidays and annual leave.

KDI called on the Kosovo Assembly to harmonize laws with the EU standards, and for the Kosovo Government to implement the Law on Labour that would protect workers’ rights.

In protection of workers’ rights, KDI also suggested that the courts should treat the issues raised with priority and efficacy.