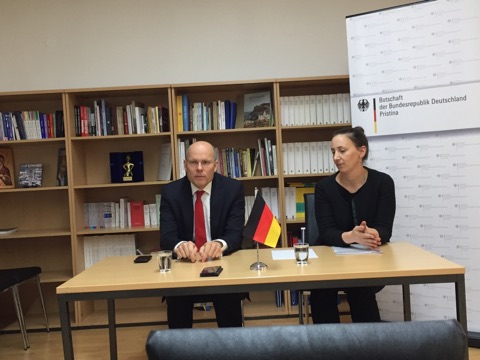 Member of the German federal parliament, Bundestag, Peter Beyer in a meeting with journalist in Prishtina. | Photo: Erjona Popova

Member of the German parliament Peter Beyer expressed his concern to Kosovo journalists on Tuesday over President Thaci’s proposal for territorial changes between Kosovo and Serbia.

At a meeting with journalists at the German embassy in Prishtina on Tuesday, member of the German federal parliament, Bundestag, Peter Beyer said that there is a “high risk” involved with a possible border correction between Kosovo and Serbia.

“I have heard the expressions border correction, territory exchange… this means partition. It is not healthy, it is very dangerous,” Beyer said.

Beyer, a member of Angela Merkel’s Christian Democratic Union, as well as Coordinator of Transatlantic Cooperation at the Federal Foreign Office of the German government, told journalists that the idea of border correction or territory exchange is “unacceptable and has a high risk.”

He said that members of the Kosovo assembly represent the will of the people.

Beyer said that he had spoken with Kosovo President Hashim Thaci, but according to him, Thaci had said “I am president, and I decide.”

“The elected need to take care of their citizens,” he said.

Responding to a question regarding the nature of a final agreement between Kosovo and Serbia, Beyer said that the “two Germanies model should not be ignored,” adding that he is not here to give ideas.

In 2012, NGO Democracy for Development Kosovo issued a memorandum recommending the ‘Two Germanies Model,’ which would see Kosovo and Serbia agreeing “to enter into a binding agreement to recognize one another’s existence—territory, internal and external sovereignty— without doing so formally and symbolically.”

Beyer said that he had made it clear to Thaci that Germany is against territorial exchange or border correction between Kosovo and Serbia and that a normalization of relations requires a sustainable solution.

He said that November 2018 would be “a month of decisions” for the EU-mediated dialogue between Kosovo and Serbia, and that members of the assembly represent the will of the citizens, not the president.

“I met Thaci before I came here and I was very clear with him. I said the same things as I am saying to you now, not to repeat myself. I do not think that he was surprised, he knows the German position [on this],” he said.

Beyer said that he does not know when visa liberalization for Kosovo will happen.

“I do not know [when visa liberalization will happen]. Now it is in the hands of the foreign ministers [of EU member states]. I really do not know when it will happen. Nobody should promise any dates,” he said.

He said that he will visit Belgrade on Wednesday.

“I will meet the Serbian president [Aleksandar Vucic] tomorrow and I am curious to hear his opinion [on the dialogue],” he said.