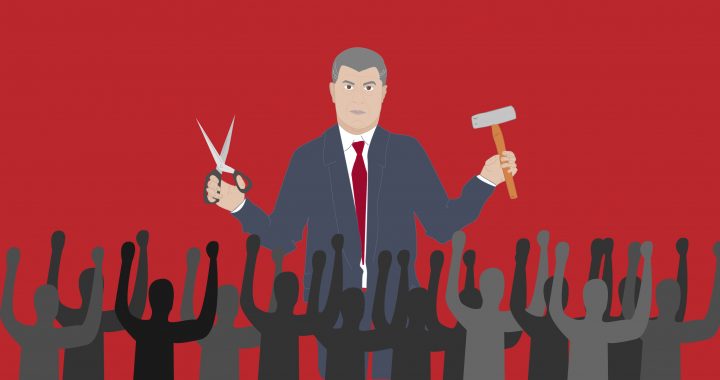 The necessity of Saturday’s protest

Shpend Kursani’s take on why citizens should join Saturday's protest organized by Vetevendosje against Thaci’s new ideas for border correction.

Vetevendosje recently issued a call to citizens of all ages and places in Kosovo, as well as to members of all the other political parties and organizations, to join their next protest planned for Saturday, September 29.

There are two things on which our response to this call should be based. The first is a basic understanding of the concrete situation, and the other is the opportunity that ought to be grasped in such a situation.

President Hashim Thaci, who seems to be one of the main targets of this protest, continues to amaze us with his rapid and unquestionable authoritarian moves. But Thaci’s imperious endeavours are not being developed in a vacuum, or without premise.

We need to remember that Thaci came to power in 2007, taking into his hands the Declaration of Independence, reading it aloud in 2008. Then, during his time as Prime Minister, he was swift to strike the letter of that independence with a sledgehammer. In 2012, he removed the substance of the Republic, only to replace it with a footnote which did not benefit Kosovo, but surely benefited Thaci.

With the April 2013 Brussels Agreement, he laid the basis for the substitution of the rights of Serbs in Kosovo for the rights of Serbia over Kosovo. It did not benefit Kosovo, but it surely benefited Thaci. He swapped his power as a Prime Minister for that of a President, a power which, as it came to grow more potent, also became more dangerous.

As President he swapped his sledgehammer for scissors, trying to snip away at uncontrolled parts of the territory at will. His power to take up the scissors as President, thus, cannot be understood without seeing the damage done with his sledgehammer as Prime Minister.

Since 2007, Thaci’s power over Kosovo has been a constant. Yet, the premise for this constant is not just the sledgehammer and the scissors in his hands, but also the sword at his neck. We cannot understand Thaci’s power without considering the negotiations with Serbia and the Special Court, which came as a result of different accusations made against him the very year  he began the negotiations with Serbia in 2011. The Special Court looms over his head. It is activated in public debates whenever he does not listen, and it is suspended whenever he does.

The clearest case for us was when in December 2017 Thaci began not to listen, and the dark clouds of the Special Court began to form over his head. The international community threatened us by allegedly questioning “the future of Kosovo” behind which, in fact, laid Thaci’s future. The latter began to listen, so the Special Court hibernated. As a result, Thaci’s power is not only harmful, but also dangerous. It is not incorrect to state that Thaci has held on to power (longer than the life of the Republic) through democratic and institutional processes. However, it is impossible to understand Thaci’s hold on to power and overall state capture without first understanding the consequences brought about first by his sledgehammer, then his scissors, and then the sword at his neck.

Different methods were used throughout the years to make the student, the teacher, the professor, the worker, the old and the young believe that such issues are untouchable for all but him, always cloaked with the phrase: “big issues”. And then, with great mysticism, empty phrases like “great powers” and “big problems” are discussed to push away the common, supposedly powerless citizenry from discussing these very necessary “big issues”. As a result, the propaganda machine created a general consent, normalizing the fact that “big issues” are to be dealt with only by a handful of men.

However, understanding and dealing with “big issues” is essential before we do the same with all the other “lesser issues”, because the former is inherent for the latter. “No, those are big issues too”, would be a random answer that students give, for example, if one engaged with them in such political discussions.

But this answer is not entirely random: the student should not be left to wonder why the “financial penalty” that Kosovo paid to the former contractor of Thaci, Bechtel-Enka, within a matter of a few seconds, exceeds double the amount of financial goods that the University of Prishtina receives over the entire year. Fifty-three million euros were set aside for Bechtel-Enka with the click of a button, whereas around 45,000 students of UP received 27 million euros over the entire year.

Also, the student should not be left to wonder why each of those who have been fraudulently put on the Veterans’ List by close state circles to keep the peace and maintain their power, receives three times more financial benefits than each university student does. On average, each of those that were fraudulently put on the Veteran Lists receives 170 euros a month, whereas each university student on average receives 50 euros a month.

Likewise, the student should not be left to wonder why a bottle of wine that the President of the poorest country in Europe consumes costs three times more than what a student receives on average each month. Thus, without dealing with and understanding “big issues”, it is difficult to understand and deal with these others, by all means big and important as they are.

If this is our basic understanding of the concrete situation, what ought to be done?

We have two options: The first is to say that the situation is hopeless, and we give up. The second is to use every opportunity that is given to protest and revolt against the captured state and the leadership that is responsible for its capture.

The first option takes us out of the county, as it is taking many already, leaving the state in service to those that have captured it. The second option takes us where we need to be, in the right place at the right time, to free the country from those involved in capturing the state, along with its future, for private benefit. The next opportunity presented to us is on Saturday, in Prishtina, always with the hope for more Saturdays of protest to come and a growing number of people – until we liberate the state from its captors.

Shpend Kursani is a PhD researcher in the Department of Political and Social Sciences at the European University Institute, where he researches post-1945 cases of contested states.