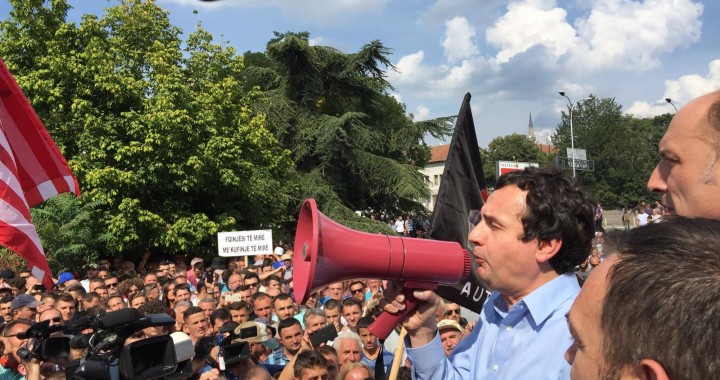 Leader of Vetevendosje Albin Kurti invited citizens to join a protest against President Hashim Thaci and the suggestion of border corrections between Kosovo and Serbia.

In a press conference on Tuesday, Vetevendosje’s Albin Kurti announced a protest scheduled on September 29 at 2:00 pm in Prishtina against President of Kosovo Hashim Thaci and his calls for “border corrections” between Kosovo and Serbia in the past few months.

Kurti said that Thaci currently has the lowest popular support since the beginning of his political career, and called his suggestions to include discussion of border corrections in the EU-mediated dialogue with Serbia a “personal adventure.”

“The political situation in Kosovo is grave, especially because of President Hashim Thaci’s commitment for a new dialogue with his Serbian counterpart Aleksandar Vucic without a mandate from the [Kosovo] assembly, without principles for dialogue, without an inclusive team, and with his prediction of bitter compromise during border corrections,” he said.

Kurti said that Thaci has no legitimacy or credibility in Kosovo, and the socio-economic situation has also suffered from bad governance and corruption.

“A people does submit to one human. Nothing less than saving Kosovo is in question, [and] the protection of territorial and institutional integrity. The protection of the people and peace in Kosovo are not only a right, but a duty as citizens of the republic,” he said.

He said that talks of border corrections trivialize the independence as well as the territory of Kosovo.

“We cannot participate in this dangerous game, a type of territory bargaining between autocrats as though they [the territories] belong to them,” he said.

Following a meeting between Democratic League of Kosovo officials on Monday, Isa Mustafa, leader of the party, said that it is not the right time to protest on the streets.

“When we asses that time has come for protests, we will organize them or we will join others. We consider that there are instruments through which we can present LDK’s position and we do not consider that we should organize protests now for such issues,” Mustafa said, adding that his party does not support border corrections with Serbia.

Visar Ymeri from the Social Democratic Party, PSD, an MP who was formerly part of Vetevendosje’s parliamentary group, excluded the possibility of cooperation with Vetevendosje, calling their invitations “party organizations.”

“We have not been notified about the goals and purposes of Vetevendosje’s party organizations, thus it is is impossible for us to cooperate with them in these conditions,” he said. “Cooperation in the opposition is never done through underestimation of the other.”

On the same day as the protest, Thaci is scheduled to meet President of Serbia Aleksandar Vucic in Brussels in the so-called final phase of normalization between Kosovo and Serbia.