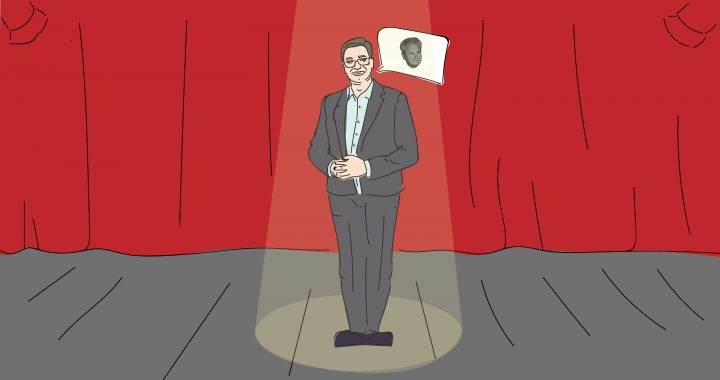 A new reality show with an old script

Following the “spectacle” of Serbian President Aleksander Vucic’s visit to north Kosovo last Saturday and Sunday, the cameras may be gone, but the promises he made to Kosovo Serbs remain.

The very moment rumors of a potential new war in Kosovo stopped, when all the new border plans went silent, the question arose of when something new would come to the fore, something which  would serve as daily entertainment for the masses and begin a new round of arguments among the Kosovo Serbs, along with those in Serbia. This time, we welcomed yet another spectacle, another distraction from daily life, another story to pass the time.

Last weekend, September 8, Kosovo Serbs welcomed none other than the President of Serbia, Aleksandar Vucic. The visit was announced as one which would take the President to places where none of his predecessors had ever gone before (naturally, that is how it goes with the “for-the-first-time-in-history” President of Serbia) and was prepared weeks in advance. In the end, however, it came to pass as somewhat of a reality show for the Serbian President.

Let us take a look at this show one step at a time, then. From the very day the visit was announced, Serb political leadership in Kosovo began preparing for the arrival of Aleksandar Vucic. As is usual, all public sector employees were obliged to attend the gathering. A subsequent public space cleanup effort ensued, which lasted almost up until Vucic’s arrival. The well-tested practise of raising tensions was everywhere prior to his visit,  a dramatization of the current state of affairs to maximum effect.

More precisely, two days before the President was scheduled to visit Kosovo, the Director of the Office for Kosovo and Metohija, Marko Djuric, went in front of the media, stating that the Kosovo authorities had barred him from entering the territory of Kosovo. Kosovo institutions and the Kosovo Police denied these claims the very same day, pointing out that the decision to not enter Kosovo was made by Djuric himself.

One day before the arrival Serbian media went berserk, claiming that there was real danger with Vucic’s arrival to Kosovo. All of this took place only so that the President of Serbia could ultimately, with all possible drama, proclaim he would still go to Kosovo, in spite of all the danger.

All of this leading up to September 8 was a mere warm-up act for the reality show that followed suit. Vucic was the star of the show, with supporting characters being various ministers in the Serbian government, and the Serb mayors in Kosovo.

Journalists of primarily the Radio Television of Serbia did their best to make the show complete by having special coverage which followed the entire visit. This was accompanied by 11 hours of live coverage from Kosovo. The President was given ample time on the Serbian national broadcaster during each leg of the visit – from Lake Ujmani, all of his speeches, visits to various families and schools. Things were covered live, actors played their roles, promises were given, utterly dramatized situations unfolded (mainly prepared far in advance).

What else do you need for a reality show? Not much else, except for the culmination of all these events, which would certainly follow — the visit did not end on day one.

The first day of the President’s reality show ended on a truly positive note: he promised aid, road construction, an economically strong Kosovo Serb (as they kept proclaiming on day one). There was talk of peace and cooperation with Albanians, he promised new factories, he reached out to general managers of companies in Serbia via the national broadcaster to help the recovery of those factories in the north which are today closed.

There is no better word for this than “spectacle” – the President made promises, the people were kept happy. One might even say that this day brought a certain level of hope to Kosovo Serbs. Possibly uplifted by stories of better living, they had, for God knows how long, believed in the story that this long wait for a better life might soon end.

Then day two of Aleksandar Vucic’s visit happened. As part of his visit, among other places, the President wanted to visit the village of Banja in Skenderaj, in central Kosovo. However, he was not allowed due to roadblocks erected by Albanian veterans, and a retraction of permission to enter the said village, previously issued by the government of Kosovo. The security situation and roadblocks around the village and the reactions of Kosovo war veterans  were all listed as reasons.

In the end, like some kind of Big Brother (the one which you cannot see, but always hear), Vucic spoke to the local villagers via phone call. Fuel always needs to be added to the fire. As the President was not allowed to enter the village, the Serbian Minister of Defense Aleksandar Vulin reacted, saying that the Serbian Armed Forces are ready to act if the President of Serbia should order so.

There is a perfectly logical question that still lingers, even after this dramatically directed show: why did the  President of Serbia never ask how he was supposed to get to Banja? Was the reaction of the Kosovo veterans not completely logical? From the perspective of the Serbs, the moment Hashim Thaci would want to come to northern Kosovo, the Kosovo Serbs would react in the same manner.

Both presidents are genuinely undesirable, but in different parts of Kosovo. However, as it usually happens, the Serbian President had not thought this through ahead of time. Or perhaps he did, and just cannot get enough of the drama.

The final act followed suit. In a square filled with people in North Mitrovica, Vucic gave his final speech, which was expected to give concrete suggestions or at least instructions on how to solve the Kosovo issue. The packed square, filled mainly with public sector employees from all over Kosovo who were obliged to show up, witnessed the final phase of this directed drama. While one day prior the President of Serbia called for peace and cooperation with Albanians, in his Mitrovica speech he looked back at the history of Serbian warfare and harkened back to the “good intentions of Slobodan Milosevic.”

In his speech, Vucic pointed to a famous speech of Milosevic from 1989, an attempt to justify his actions. After calls for achieving and preserving peace within this unique spectacle, one does not expect that someone is prepared to glorify the man who threw us into chaos and war.

This is what reality programming must be like, I suppose, the outcomes of which are unknown to everyone but the creator. To make matters worse, following his ode to Milosevic, Vucic yet again called for peace and cooperation.

The Serbian president managed in the same speech to call for peace and to glorify the person who started the war, and nobody reacted. The question remains, how is somebody who is dedicated to peace, as Vucic claims he is himself, able to find justification for the person responsible for so many crimes across the whole ex-Yugoslavia region?

Furthermore, how is it possible that the same person is seen by European Union as someone who will resolve the Kosovo problem and lead this region into peace? Calling for peace by remembering the acts of Slobodan Milosevic is simply hypocrisy at its finest.

On the last day of the visit, around 2 pm, the president had left, the Serbian national broadcaster had stopped its live coverage and things appeared to be going back to normal. Cameras were turned off while regular daily life resumed, leaving behind the promises that had been made. It remains to be seen what the point of this live reality show ever was. Will it be, as some hint, new borders between Kosovo and Serbia? This question remains unanswered.

What is left behind after this performance of the President is a glimmer of hope for a better life, which will vanish into thin air with yet another distraction for the Kosovo Serbs. A fear remains of new conflicts on both sides – it is neither easy for the Albanians when the Serbian president parades in their neighborhood, nor for the Serbs as Albanians blockade the roads.

In any case, the star of the show has now left the building, while real stakeholders remain behind, forced to face the reality of living in a Kosovo that turns more into a reality show with each political discussion, even if the script remains the same.