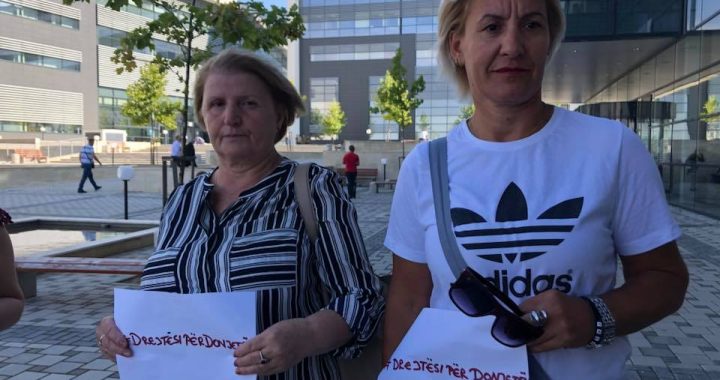 Following the acquittal of Naser Pajazitaj, accused of the murder of Donjeta Pajazitaj in November 2015, protestors at the Court of Appeal demand judicial institutions responsible for the appeal bring Pajazitaj to justice.

A protest organized by Kosova Women’s Network, KWN, outside the Prishtina Court of Appeal on Monday called for a fair review of the decision given by the Basic Court of Peja on the the murder of 24 year-old Donjeta Pajazitaj.

Pajaziti was found dead in December 2015 in the mountains near the village of Strellc, Decan, six weeks after she was reported missing by family members. Naser Pajazitaj, the victim’s cousin, was accused of shooting and killing her, but was subsequently acquitted of her murder in March 2018.

Holding slogans reading #DrejtesiPerDonjeten, #JusticeForDonjeta, the protesters demanded that the Court of Appeal review the decision of Peja’s Basic Court and bring to justice the person behind the murder.

“We are protesting peacefully to appeal to the judicial institutions that they take Donjeta Pajaziti’s case seriously, to once again review all findings from the court that acquitted the main suspect,” said Adelina Berisha, advocacy coordinator for KWN. “We request that the evidence is reviewed to see whether this decision was right. If the suspect did not cause Donjeta’s death, then the murderer should be found and brought before justice,” she said.

An appeal was brought by the prosecutor of the case in the first instance, Valbona Disha-Haxhosaj, who claimed that the court erroneously established the facts by relying on evidence provided by the accused’s wife and daughter.

“Dushe Pajazitaj, wife of the accused, testified that on November 9 the accused, together with his daughter, left the house and came back, which contradicts the daughter’s statement, [who said] that the day Donjeta disappeared, she did not leave the house, but later changed this statement in [front of] the prosecution,” the appeal states.

Monday’s protest is the most recent in a series of calls for justice across Kosovo concerning the failure of authorities to properly deal with, or take measures to prevent, the murder of women. In August, protests were held in Prishtina and Gjakova following the murder of Valbona Nrecaj and her daughter by her former partner, Peter Nrecaj in Brekoc on August 7.

According to the Police Inspectorate of Kosovo, ongoing investigations into the officers dealing with the case are being held following claims of negligence of the police on duty made following Nrecaj’s death. Five hours before she was shot dead, Nrecaj had reportedly appealed to the police that Nrecaj had sent her threatening messages, who then failed to respond adequately to the calls.

Earlier this year, three billboards were erected by the Haveit Collective in protest of the murders of Diana Kastrati and Zejnepe Bytyci, both of whom were murdered by their husbands in 2015 following multiple calls to the police.

Picture of the billboards?

The billboards, which were located on Luan Haradinaj Street outside the Kosovo Police Headquarters in Prishtina, were intended to raise awareness on the lack of preventive measures in place to deal with calls of domestic violence, asking “How many more missed calls?”

Protests have also been held challenging lenient sentencing from justice institutions following a guilty verdict. In April 2017, the Basic Court of Prizren sentenced the husband of Zejnepe Berisha, Nebih Berisha, to 12 years imprisonment for stabbing his wife 20 times with a knife.

In June 2017, the Basic Court of Peja began to hear Pajazitaj’s case. Her cousin, Naser Pajzati, was charged with one count of aggravated murder and two counts of possession of illegal possession of weapons.

Pajazitaj was sentenced in March 2018 to two years and four months in prison for the unlicensed gun charge, but citing insufficient evidence presented by the prosecution, the presiding judge acquitted Pajaziti of his cousin’s murder.

Following the issue of the verdict in March, KWN called on justice institutions to continue their investigation into Pajtazaj’s murder in a press release, noting the previous failures of the justice system to adequately investigate and prosecute cases concerning the murder of women and girls.