Memorials to fallen Yugoslav Partisan fighters are no longer popular in Kosovo – and the fate of Prishtina’s old war memorials is uncertain.

Walking around the center of Prishtina, it is easy see that the city’s architecture is a patchwork of old and new: brand-new office and apartment blocks are often a stone’s throw from ancient mosques and long-abandoned homes.

Since the 14th century, Prishtina has changed hands from one ruler to another, including the Ottoman Empire, Austria, Serbia and Bulgaria. In consequence, a variety of architectural styles have shaped its current look.

After Prishtina was made the capital of Kosovo in the Yugoslav federation following World War Two, the regime of Josip Broz Tito instituted an urban development policy that might be termed: destroy the old, build the new.

It saw the demolition of numerous old buildings, many of them built in the Ottoman era, in favor of modernist structures.

Among these new structures were monuments, or spomenici, erected to commemorate the Yugoslav Partisan forces that drove out Nazi Germany and led to the establishment of the Socialist Federal Republic of Yugoslavia.

Hundreds of such monuments were built across the former federation, serving to remember the war and the communist revolution – and the almost one million casualties in the region, around 200,000 of whom were Partisans.

Prishtina is home to two such memorials: one in the center of town, known as the Brotherhood and Unity Memorial, and another on a hilltop in the Velania neighborhood, called the Partisan Martyrs’ Cemetery.

“The intent was also to emancipate [people] through architecture. The difference between modernism in Yugoslavia and in the rest of the Eastern Bloc was that the former was much more liberal, with elements from the West, too,” explains Bekim Ramku, director of the Kosovo Architecture Foundation and chair of the Kosovo branch of Docomomo. This organization deals with the documentation and conservation of modernist architecture around the world.

These monuments are often seen now as bizarre and outlandish, especially because of their strange shapes, angles and locations.

The Brotherhood and Unity Monument, also known as tre rremshi (three branches), was added to Prishtina in 1961, replacing part of the city’s old merchant quarter, the carshia, which housed over 200 shops at its peak.

“The carshia was not in a very good condition. It was demolished to make way for the monument and for the government campus, which was one of the first [modernist] constructions in the city,” Ramku recalls. 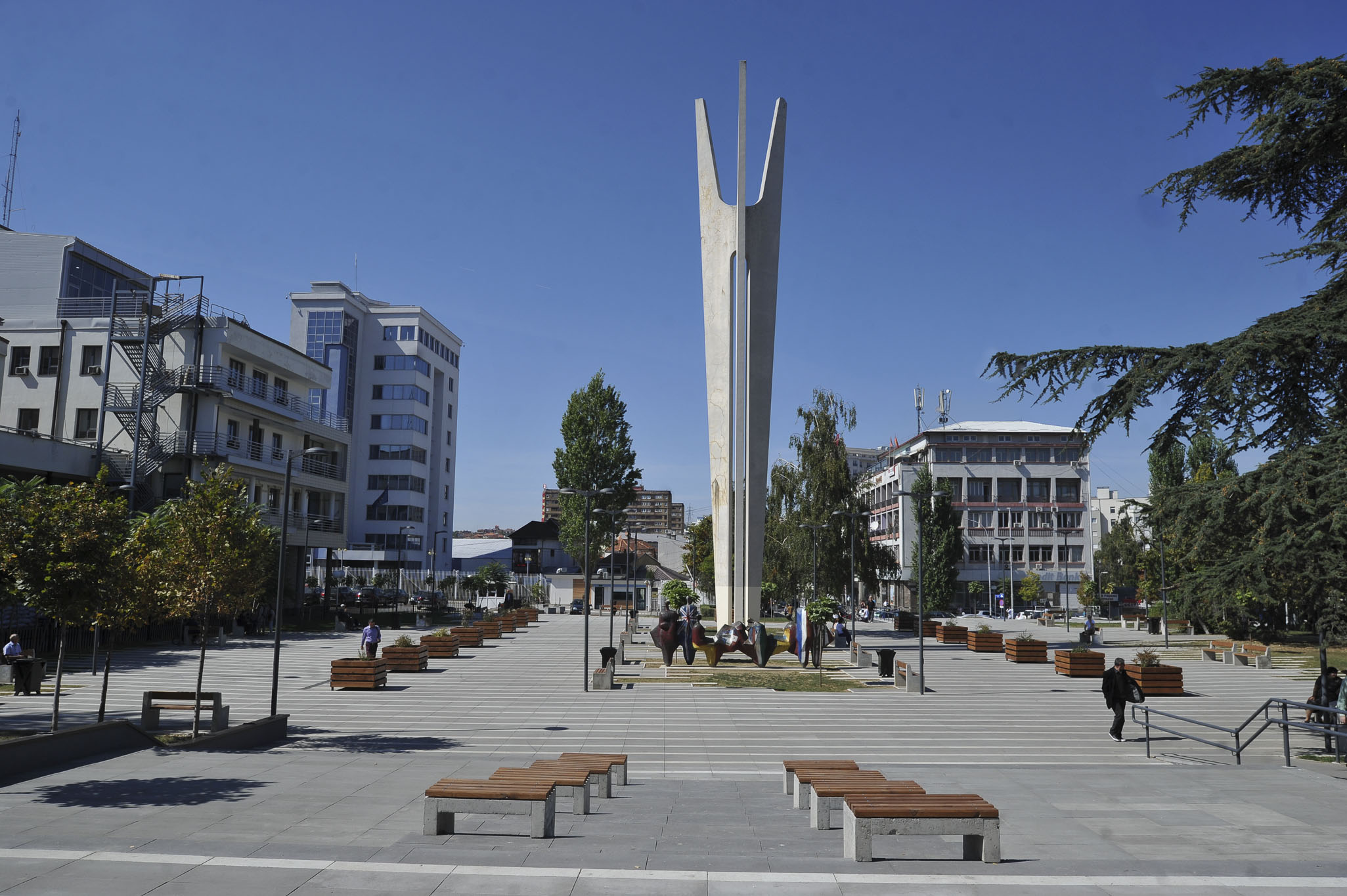 The Brotherhood and Unity square and monument after renovation. | Photo: Atdhe Mulla

The monument, designed by Serbian sculptor Miodrag Zivkovic, was supposed to represent the fallen Partisans of the region, regardless of their ethnicity.

The original complex included a square, a roughly 20-meter-long obelisk, bronze statues of eight Partisan soldiers, and a reflective pool, which was removed following work in the 1970s.

“They wanted to invest in public spaces, and Prishtina, as a center of the region, received benefits. They cleaned up everywhere and destroyed something old to build newer things,” Ramku says.

Following the war in Kosovo, the monument, along with the square, was neglected and fell into disrepair.

In 2010, the municipality, then led by Isa Mustafa, now head of the Democratic League of Kosovo, proposed demolishing the monument to build an underground car park and erect a monument the former Kosovo Liberation Army commander, Adem Jashari, in its place.

“They sent it [the plan] to the [municipal] assembly and changed the name of the square to ‘Adem Jashari Square,’” said Yll Rugova, director of culture at the municipality under Mayor Shpend Ahmeti.

The square was refurbished and re-opened in August this year, following a failed attempt to renovate it during Ahmeti’s first mandate as mayor in 2016, due to land disputes between the municipality and the Kosovo parliament.

The project, costing about 300,000 euros, did not pass without without criticism, however.

A letter sent by Docomomo International to Ahmeti in March drew attention to the project’s exclusion of the bronze statues and marble base that were part of the original design by Zivkovic.

Rugova confirmed that the base, along with the reflective pool, was entirely removed in the 1970s, and that the statues were initially supposed to be removed from the square as well. 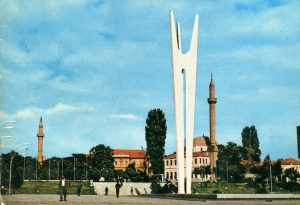 “The platform was covered in the 1970s. I formed a team to discuss how to preserve it and restore it to its previous state, but then I was sent the photos, and saw that it could not be repaired,” Rugova said. “The project planned for the removal of the [bronze] statues, but we [the municipality] prevented it.”

To date, the monument, originally named “The Freedom Monument” according to Rugova, does not enjoy any institutional protection.

In 2011, Kosovo’s Ministry of Culture, Youth and Sports established a List of Cultural Heritage for Temporary Protection, inheriting 426 assets from a previous list from the 1990s. The list is renewed annually, with the next revision scheduled for early October.

Vjollca Aliu, director of the cultural heritage department at the ministry, said the monument has never been part of the list – and was never even proposed for temporary protection.

This is despite a legal provision that allows both individuals and organizations to submit proposals to add items to the heritage list. The proposals are then evaluated by institutions related to the ministry, as well a specially appointed commission, and later sent to the minister for final approval.

Rugova has his reservations about the selection process.

“While the Grand Hotel is under protection, the former Germia [another Yugoslav-era building in Prishtina] is not,” he noted. “A house in the historic center is protected, while another one right next to it is not. It is a strange process because everybody can propose; it is very democratic; if you have a good reason they can add it to the list,” he said.

Rugova said that there are real risks related to the monument’s lack of protection. A future local government could try to demolish it, if it secured approval from the municipal assembly, as almost happened when Mustafa was mayor. 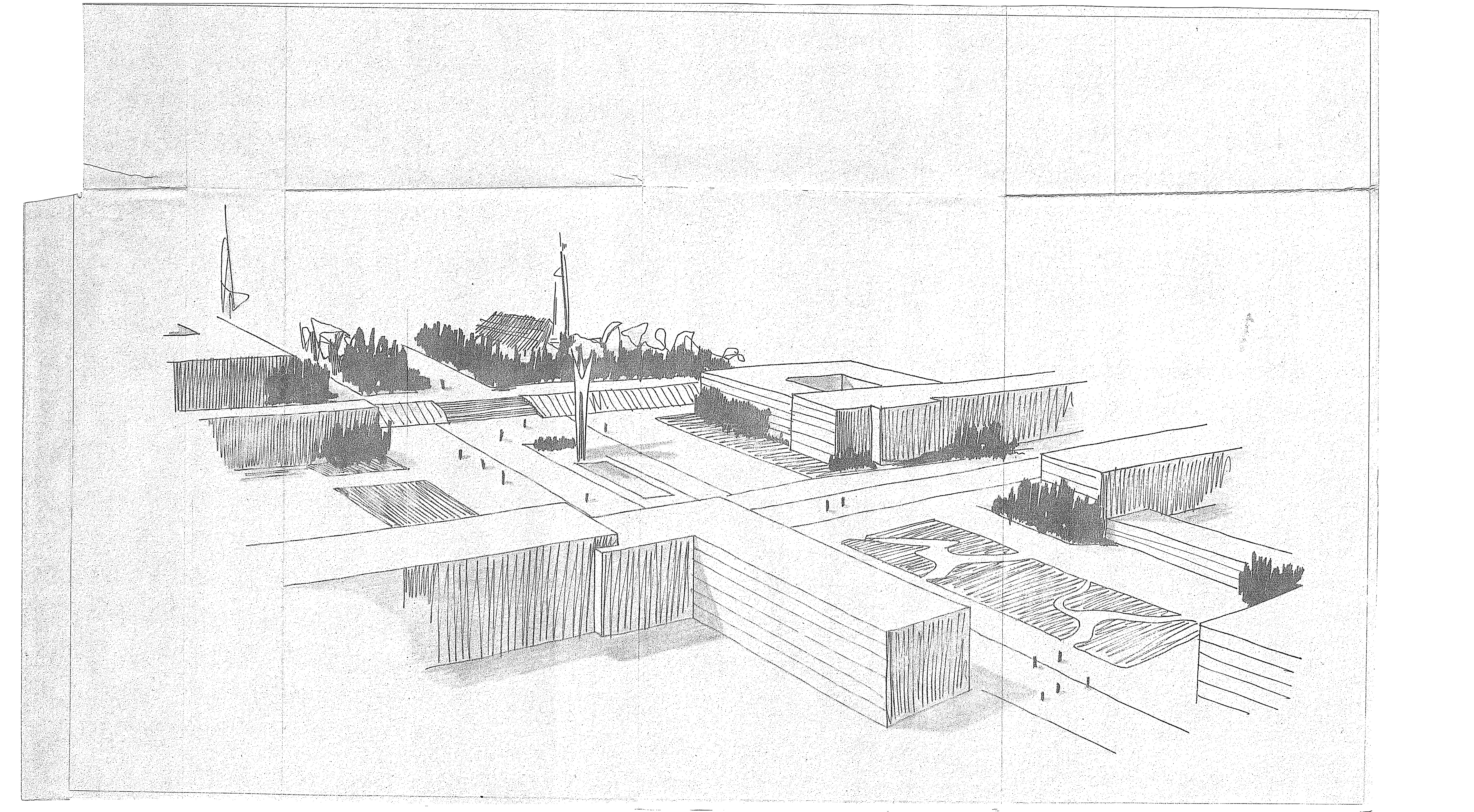 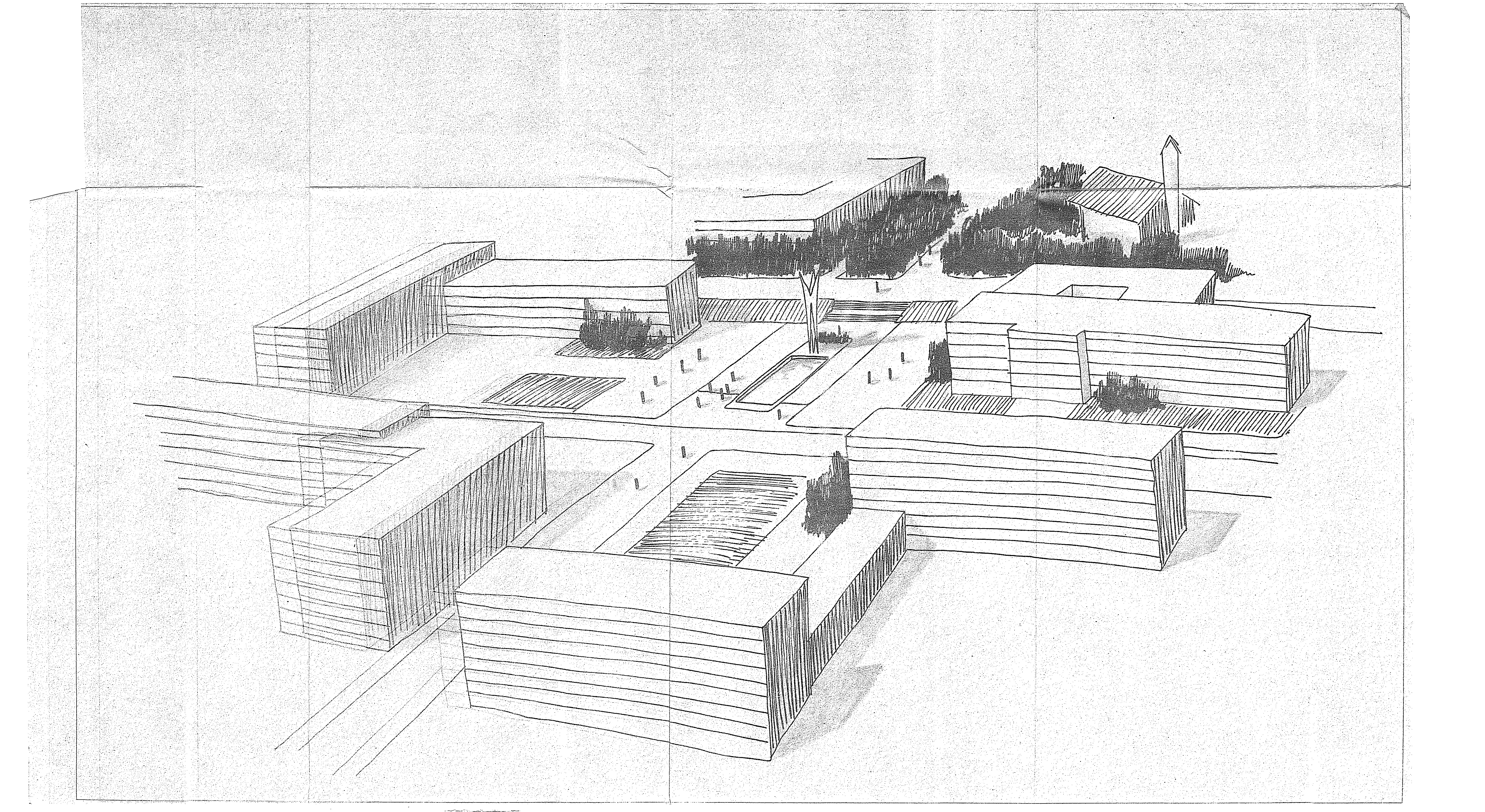 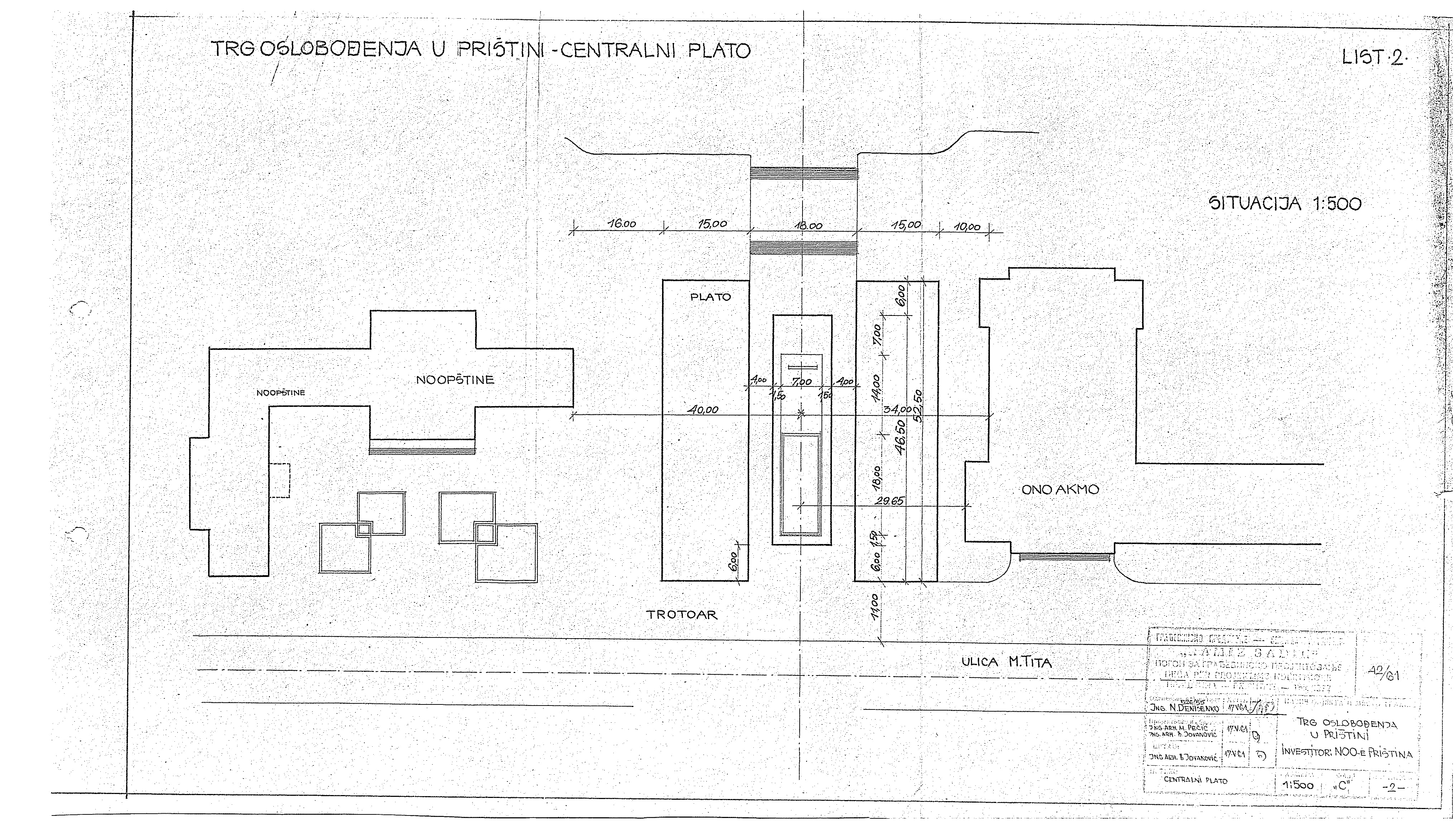 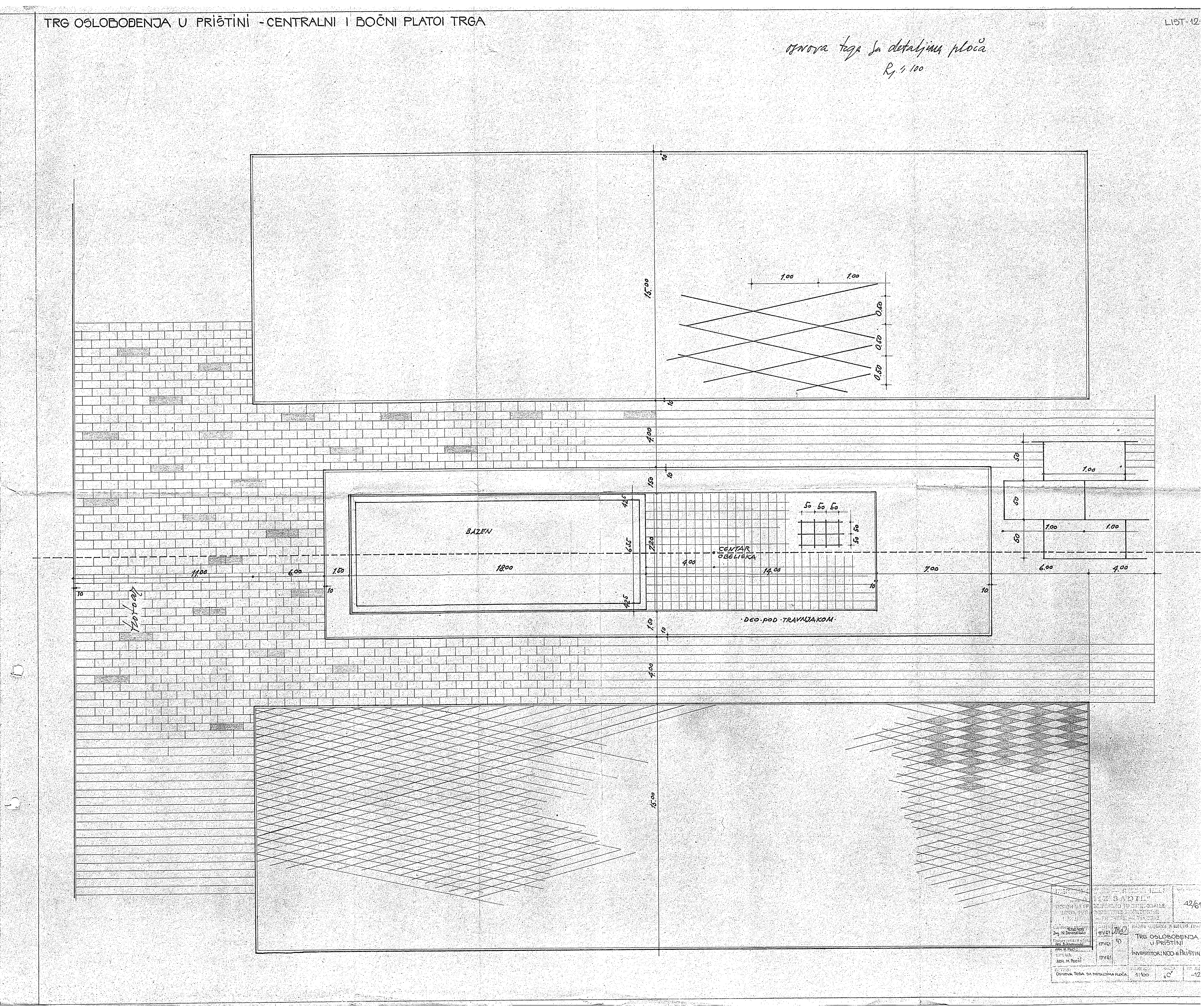 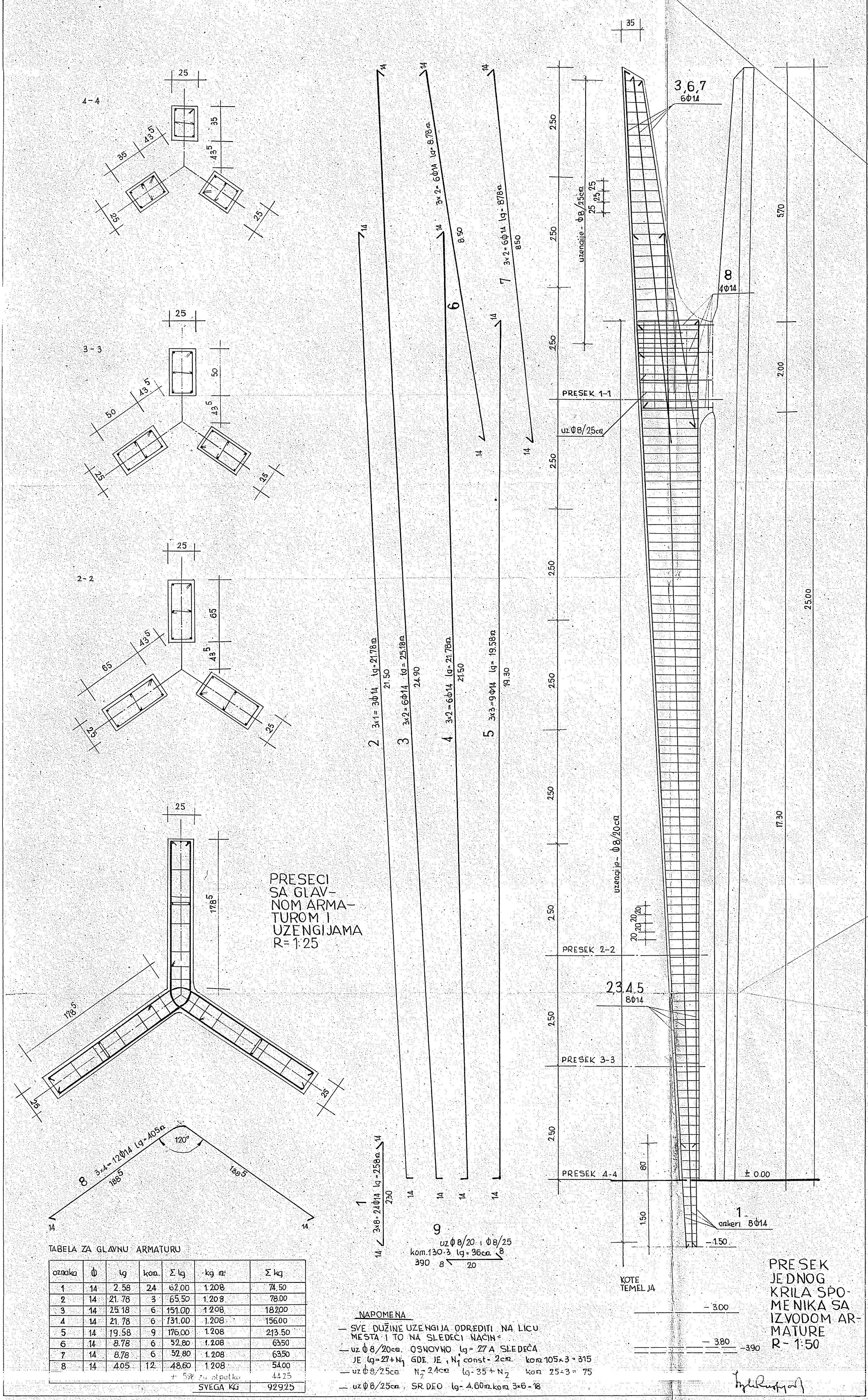 Drawings of the original project for the Brotherhood and Unity square and the monument from the '50s. | Courtesy of the Municipality of Prishtina.

He said it is time for individuals to refresh their perceptions about cultural heritage.

“It is time that we ourselves proposed these monuments [for protection], I can do it, you can do it – and include those that we find important into the protection list,” he said.

“Due to populist sentiments, there could be demands to topple the monument, which was initially built against Nazism and Fascism – which would be symbolically bad for us, to destroy anti-Fascist memorials,” he added.

Unlike its sister in downtown Prishtina, the memorial in Velania, officially known as “The Graveyard of the National Liberation War,” has been on the temporary protection list every year from the beginning, as one of over 400 sites that were transferred from the pre-war list, according to Aliu.

Designed by Serbian architect Svetislav Licina, it was inaugurated in the same year as the Brotherhood and Unity Memorial, in 1961, reportedly on top of a vault containing the remains of the Partisans it honored.

The complex includes a set of curved metallic beams that form a globe-like shape in the center, a cobbled yard, and eight crescent-shaped concrete walls around the outer section.

Initially, the walls held 220 circular tablets inscribed with names of Partisans and other people killed during the war buried underneath the monument. None of them remains. They were apparently removed during the 1990s. 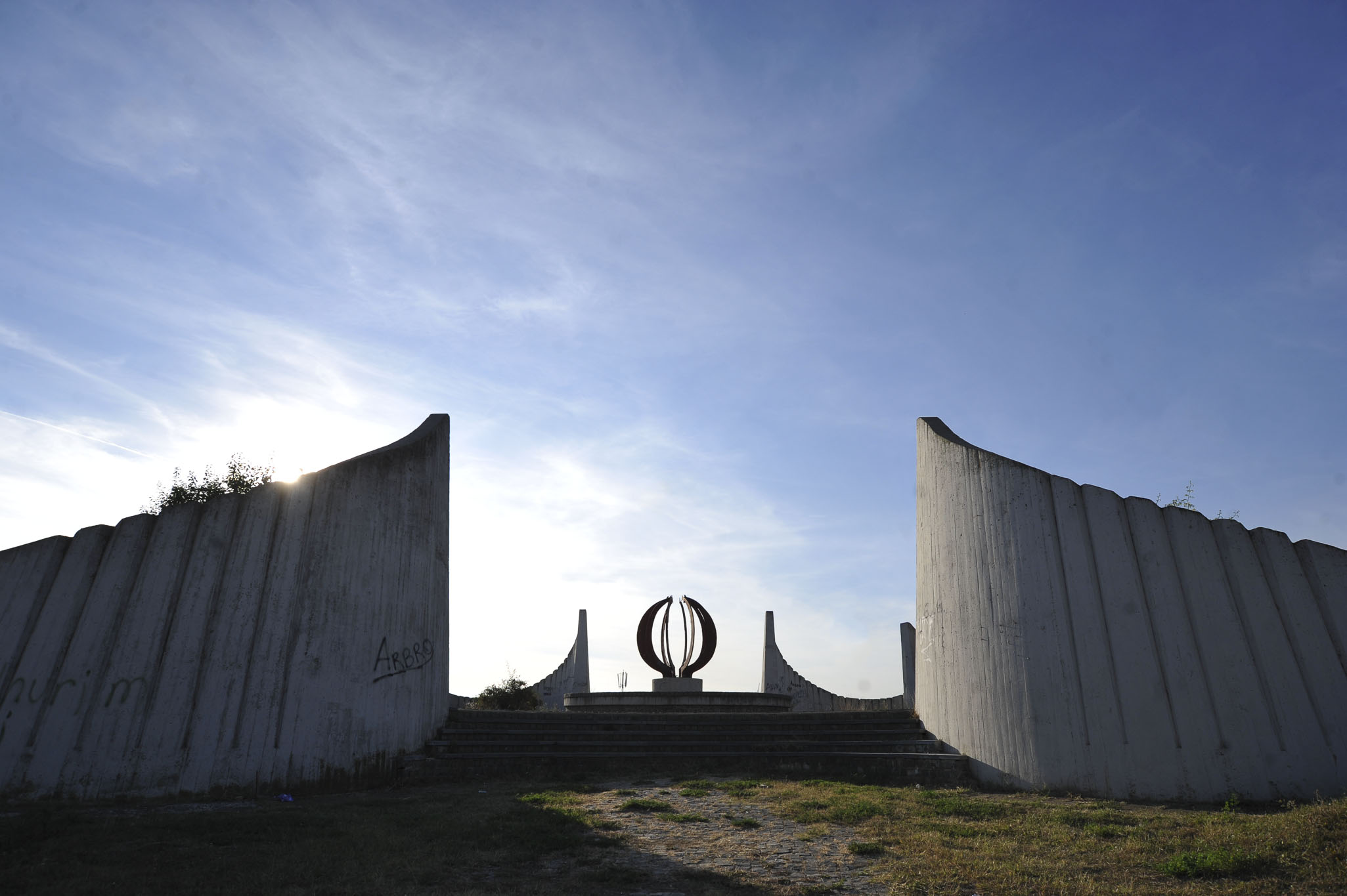 After the Kosovo war, KLA martyrs and veterans started being buried a few meters from the monument. Burials continue to this day and now number over 40 graves. Today, the area is referred to as “The martyrs’ graves.”

Ibrahim Rugova, the first president of Kosovo, was buried there in 2006. Recently, the former Kosovo Albanian political prisoner and activist Adem Demaci, who died in July, was buried not far from the monument.

During Hashim Thaci’s government in 2013, there was a plan to build a large memorial complex to former president Rugova that included an amphitheater, a lake, and the KLA graveyard.

The Ministry of Environment and Spatial Planning signed a contract with two companies, FERDA and UNICOM, to complete the first phase of construction for the memorial complex.

The 468,894 euro contract, signed on March 11, 2013, foresaw the building of the amphitheater, walkways, the lake, lighting, the KLA martyr’s graveyard and “the National Liberation War plateau.”

In 2013, Muharrem Elshani, owner of UNICOM, affirmed that the current memorial would be demolished as part of the contract to remodel the plateau where the monument stands – after the ministry had denied that it would be destroyed.

According to an earlier report by BIRN, the plan for the tender bid clearly included “the demolition of the existing concrete.”

The contract was terminated in October 2016, as only 42 per cent of the contract was fulfilled within the specified time frame, data from the ministry shows. 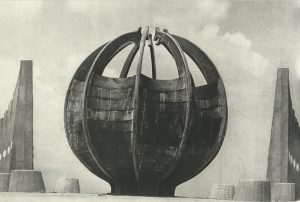 Part of the National Liberation War Monument from the ’60s. | Courtesy of Spomenik Database

The same year, all the documents on the memorial project were transferred to the Agency for the Management of Memorial Complexes, AMKMK, “for the continuation of further phases”. The 270,000 euros left from the tender were re-purposed for another memorial dedicated to Rugova, in the town of Istog.

Bislim Zogaj, the current director of the AMKMK, who took office two months ago, said his agency will soon start the process of finding another company to complete the project.

“We will start the memorial in 2019, because we are pretty late anyway but will then have a larger capacity,” he said.

Zogaj said the new project would differ from the planned complex in 2013, and efforts would be made to cooperate with other institutions.

“There should be radical changes to the [initial] project. Personally, I am interested in altering it because the context has changed from the time when the project was made. It should be a memorial complex, not only for Prishtina, but for the whole of Kosovo,” he said.

Asked about the possible destruction of the monument in the future project, Zogaj said that he did not know the details of the initial contract between the ministry and the two companies.

“I cannot give a competent answer [about the monument], as the context has changed. It should be a different project from the earlier one, and, regarding the monument … I cannot give you a decisive opinion,” he said.

When told about the legal protection that the monument enjoys under the Ministry of Culture, Zogaj said they would not go against the law.

“I do not know whether it is [protected] or not; if it is, there is nothing to be discussed … When we publish the tender for drawing up the project, we need to consider those that are protected by law,” he said.

In October 10, Minister of Culture Kujtim Gashi will sign the new list of cultural heritage items under temporary protection. Whether the status of these two memorials will be changed remains to be seen.

Ramku said that, through Docomomo workshops, he and his team are trying to gather information and ensure that Modernist monuments in Prishtina are put under temporary protection.

“All of them are under risk; when they’re not listed there is nothing you can do,” he said.

“But, you need to have [someone] with influence within the ministry, otherwise they won’t include them,” he said.

Recently, Docomomo Kosovo started an online petition, appealing for the protection of the former Germia shopping mall in Skenderbeu square, which according to their statement, is under threat of demolition in order to construct a new concert hall.

Still, institutional protection by the ministry does not ensure that the sites are not meddled with: the monument in Velania, as well as many other protected sites, such as the Clock Tower in Prishtina, are riddled with graffiti and surrounded by garbage.

The necessity of Saturday’s protest

by Shpend Kursani
Next: News