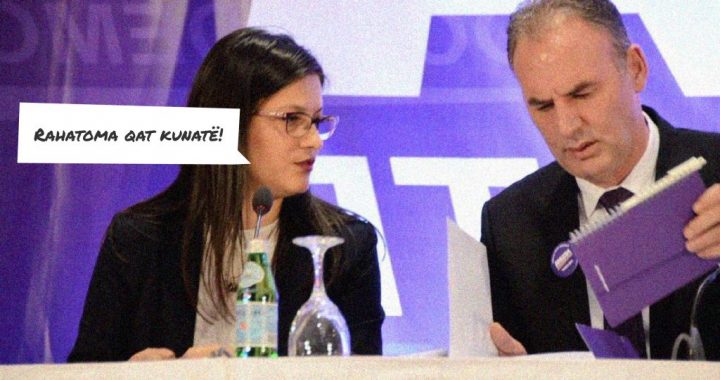 Key positions for monitoring the quality of petroleum in the Ministry of Trade and Industry continue to be filled with figures affiliated with NISMA party officials.

A month ago, Taulant Krasniqi, nephew of Jakup Krasniqi, the second highest official of Nisma was also appointed as an inspector of petroleum in the Ministry of Trade and Industry, MTI, run by Nisma minister, Endrit Shala.

Bajrami-Azizi was employed last week through a vacancy notice whose criteria was especially adapted for her qualification. When she was first appointed in May to the same position, it was rejected by the Independent Supervisory Council for Public Service on the grounds that she is a physics graduate rather than a chemistry graduate, as required by law.

This post is specifically sensitive as the quality of petrol in Kosovo has been identified as one of the main air pollutants, together with coal and old cars.

The saga of this employment has been ongoing for the last six months.

The first vacancy notice for the post opened in April this year, with Bajrami-Azizi appointed in May.

In September, the Independent Supervisory Council for Public Service canceled this decision after concluding that the MTI had illegally broadened the criteria to holding a diploma from the Faculty of Mathematical-Natural Sciences, FSHMN, of the University of Prishtina as an acceptable qualification for employment, while previously the qualifications required specifically a chemistry degree.

Bajrami-Azizi had not graduated from the chemistry department, she only had a physics diploma, both of which are available from the FSHMN faculty.

The FSHMN has five departments. Apart from chemistry, which was a defined criterion in the initial vacancy notice, mathematics, biology, geography, and physics can also be pursued at the faculty.

The timeline of violations

Valdete Bajrami is currently an adviser to Fatmir Limaj, the Deputy Prime Minister and Head of NISMA.

The ministry of Trade and Industry, where Bajrami-Azizi is employed, is led by Endrit Shala, who is also from NISMA.

The general secretary of the MTI is Burim Rrecaj, who was NISMA candidate for the municipal assembly in Prishtina.

He came out last in the list of three candidates, but was still appointed against the recommendations of the British experts. Secretaries are envisaged as key decision makers in their ministry who should be separate from political parties, and likely to remain in their position beyond the lifespan of the government.

Endrit Shala was appointed minister of MTI on October 1, 2018, after Nisma decided to oust the former minister Bajram Hasani.

Contacted by BIRN, Shkendije Bajrami-Azizi said that she is proud to have a sister-in-law like Bajrami, but that she did not help her to get the job.

“I am an ordinary citizen who applied to the open call,” she said. “Talk to the people who do the recruitment.”

“I am very lucky that I have a sister-in-law like her. Since I have an education, she did not have an influence. I am a physics engineer,” said Bajrami-Azizi to BIRN.

Bajrami-Azizi said that the FSHMN criterion was present in the first vacancy notice too, and that she has 10 years of work experience.

When asked whether she worked for the MTI with a specific task contract before being recruited as inspector, she briefly responded by saying “yes, yes.”

Valdete Bajrami, adviser to Limaj, said that she has no idea what happens in the ministry led by his fellow party member, Shala.

“Yes, Shkendije Bajrami-Azizi is my sister-in-law. You can investigate wherever you want, neither NISMA or me intervened. I have no idea what is happening at the MTI, how the recruitment works,” she said to BIRN.

Bajrami used to be head of NISMA’s parliamentary group in the Kosovo assembly from 2014-2017.

The chronology of events for the appointment of the petroleum inspector

On April 13, 2018, the MTI published a vacancy notice for the position of “Market inspector” at the Quality and Trade of Petroleum and Petroleum Derivatives Division of the ministry.

The vacancy notice had the criterion that individuals who graduated from the FSHMN can be selected for this position.

This criterion was added without the approval of MAP.

On May 16, 2018, Shkendije Bajrami-Azizi was declared the most successful candidate for this position with 85.45 points.

On September 3, 2018, this vacancy notice was cancelled by the Independent Supervisory Council for Public Service, with the justification that the selected candidate had graduated from the FSHMN, a criterion that was not approved by the MAP, and which had been added illegally to the notice.

The decision of the Independent Supervisory Council confirmed that the MAP had authorized the criteria of university diplomas in “chemistry, law, economics,” in line with MTI’s initial request, and the council found that the MTI had illegally changed the criteria of the vacancy notice in violation of civil service recruitment procedures.

“The Ministry of Trade and Industry published a vacancy notice on April 12, 2018 for the position of “Market inspector,” with criteria such as: ‘University diploma: FSHMN, Law, Economics, and at least three years of experience in professional work,’ removing the chemistry department and adding the criterion of the FSHMN,” the decision reads.

The criterion that was added illegally helped Shkendije Bajrami-Azizi to get the position.

The council’s decision said that “the selected candidate during this recruitment process, Shkendije Bajrami, on the basis of the evidence of the case, graduated from FSHMN, its physics department, a criterion that was not approved by MAP.”

A decision by the council took the vacancy notice back to square one.

The MTI decided to republish the vacancy notice. However, before the republication, the MTI requested the MAP to change the criteria, specifically to add the FSHMN criterion as acceptable, which had been added illegally the first time.

The qualification was added with approval by the MAP in the second vacancy notice published on September 18, 2018.

BIRN asked the Ministry of Public Administration why this criterion was added in the second notice, and they said that it was a request by the MTI.

“The approval of the other request made on September 18, 2018 based on the self-evaluation decided by the MTI on the added criteria. DASHC does not have information related to the procedures so far within the MTI and possible complaints, be they from internal committees or the Independent Supervisory Council for Civil Service, so please refer to the MTI regarding information on the alteration of criteria,” their response reads.

On October 17, 2018, Shkendije Bajrami-Azizi was re-declared a successful candidate for the position. This time, she had received 82.15 points. BIRN requested to monitor the recruitment process of this case.

The MTI, through its officer Bajram Shala, had accepted BIRN’s request. However, not one of MTI’s officers has responded to BIRN’s five requests sent to MTI for information of the time when the committee for interviewee selection was going to meet, or the day when the interviews would be held.