Fatos Lubonja: ‘Destroying the theatre was an attack on our dignity and freedom’

Writer Fatos Lubonja is infuriated by the demolition of Albania’s national theatre, but is not surprised. According to him, this is merely a continuation of a centuries-long cycle of those in power recreating Albania in their own image.

Following the demolition of the National Theatre of Albania in Tirana just days ago, Fatos Lubonja, an Albanian writer and publisher, expresses anger over the ‘authoritarian tendencies’ of the government in power, and its use of state apparatus to control the political and social architecture of Albania, both figuratively and literally.

For Lubonja, who was a political prisoner of Enver Hoxha’s communist regime, Prime Minister Edi Rama’s governance has been distinguished by its disregard for the law, the growing control of the economy by the country’s oligarchs and its creeping influence on the media.

Beyond the value of preserving the theatre itself, he believes that the protest against its demolition is symbolic of the fight against the threat of Rama’s growing authoritarian rule.

Lubonja offers a historical perspective of Albania’s architectural landscape, characterised by leaders that have tended to impose their own architectural tastes on the capital. These leaders have presented a series of fractured visions of Albania’s future – a trend that, with Rama, seems doomed to repeat itself.

Let’s begin the interview by asking why the National Theatre was important.

The theatre was important because it was a piece of cultural heritage, a concept which has gained bigger significance in the postmodern era. In the times we live in, there is a need for roots, identity, a need to make reference to the past.

It was also important because of the architecture that it represented, the particular historical period, the historical context in which it was built. [The National Theatre was constructed in 1939, when Albania was under the rule of Mussolini’s Italy.] 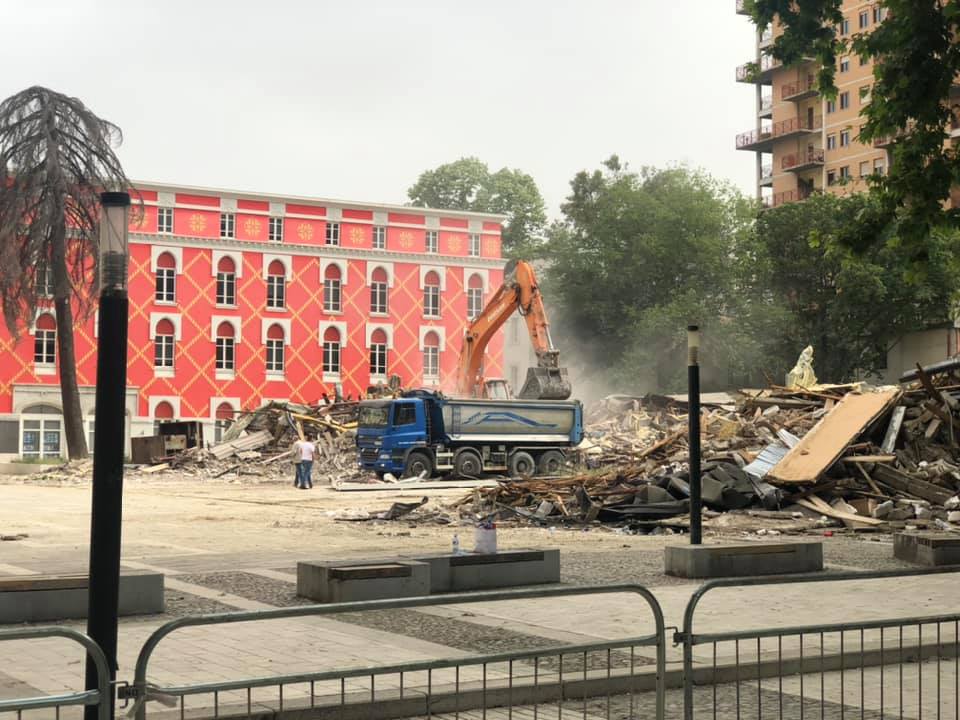 On the other hand, the protection of the theatre was also of political importance, it was a defence against increased attacks from the oligarchy. Edi Rama’s power is built atop a triangle of political, economic and media power, and is reinforced through the police and, above all, the justice system. When we do not have strong institutions acting in the public interest, then the power of the people is suppressed, and evil triumphs.

We are living in an extraordinary situation that [Rama] intends to make ordinary. He is trying to rule without law, without the Constitutional Court. He treats the opposition with disdain, makes fun of the president and describes any media that opposes him as ‘rubbish bins.’

This is not only the demolition of a physical building, it is the collapse of all of us from within – a weak building that was held up by the dignity and the freedom we strive for as human beings. The attack was an insult, a demolition of our freedom and dignity. By protecting the theatre over these two or three years, in essence, we were protecting our freedom and dignity.

The initial idea was that the new theatre would be built by the private sector. Now, the plan is to build it using money from the state budget. Does this change make any difference, in your view?

When you talk about Edi Rama, you have to remember that he has constantly deceived and lied to us, and the words that he says should always be questioned.

In 2010, when [former prime minister] Sali Berisha wanted to destroy the Pyramid of Tirana [a museum built by Communist dictator Enver Hoxha] to build the parliament there, Rama described the demolition of the historic building as ‘Talibanism.’ And this was Talibanism without a doubt.

But now, he describes the theatre as something very old. It’s clear that we have a demagogue here, a deceitful person. He has grabbed power, and works on behalf of a minority of oligarchs whose goal is to become even wealthier.

When they [the Socialist Party] were in the opposition, civil society joined the protests against destroying the Pyramid, and Sali Berisha did not destroy it. But when they came to power, they changed their behaviour.

There have been a number of protests in Albania in recent years, against the construction plans at the Grand Park of Tirana and the destruction of the National Stadium, while protests against the theatre’s demolition lasted for two years. Why are the protests failing to achieve their goals, and what does this tell us?

The first sign of failure is when those in power take control of institutions, and put them not in the service of the people and the state, but of themselves and their wealth. Then you have no judicial support, meaning that no prosecutor can take action. Instead, police begin arresting protestors. When you have this constant propaganda, then the people grow weaker, rather than being empowered.

Some have argued that destroying cultural heritage stems from ignorance. Is ignorance part of the problem, or do you insist on what you have said above?

As greed grows bigger, the space for knowledge grows smaller. It’s not that knowledge no longer exists. Even if you do not have this knowledge, it is not difficult to stick to some principles in urban development. A historical zone should not be built up higher than the buildings that already exist. But while more and more Albanians are abandoning the country, more skyscrapers are being built than ever before. They know these principles, but readily fail to apply them. You build, then the mafia comes and buys the square, then it builds more without respecting any of the rules.

These people are not ignorant. Do you think that those who sell soap while pretending it’s cheese do not know what they are selling? He knows that it’s soap, but he deceives you, because that is how he earns more. It’s just immoral.

Politicians in Albania have embraced the principle that ‘history starts with me,’ and they want this to materialise even through architecture, it has been this way ever since King Zog.

In the centre of Tirana, there is a clock tower near the mosque that is a symbol of the city. If you look and compare photographs of the clock tower from the pre-Zog era, before it was transformed, it had an oriental style. However, when he came to power, King Zog, ignorant as he was, changed the clock tower, thinking that by changing the architecture he would ‘Europeanise’ Albania – but to Europeanise does not mean to change your history.

When the Communists came to power, instead of preserving history, they destroyed the old bazaar. If you think of Istanbul, one of the most beautiful things is its old bazaar. However, in their eyes, they were destroying an old epoch and building a new world.

The interview was edited for clarity.