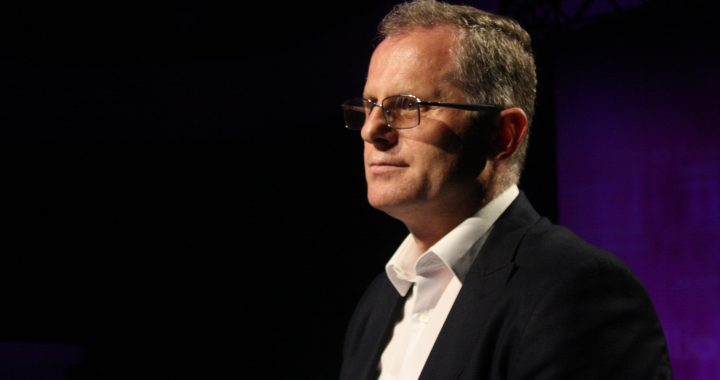 In an exclusive interview for BIRN’s Jeta ne Kosove on Thursday, incumbent Minister of Finance Besnik Bislimi addressed the many questions surrounding the future of Kosovo’s economy following the outbreak of coronavirus in the country.

Speaking to anchor Jeta Xharra, Bislimi explained that it is too early to tell to what extent Kosovo’s private sector will be affected by the lockdown. However, he said the ministry is doing what it can to soften the blow for companies affected by the closure of borders and the mass closure of business premises.

The finance minister explained that the government is currently processing tens of thousands of financial assistance applications made by businesses and individuals, as part of the government’s emergency fiscal package designed to mitigate the effects of the pandemic.

The package, announced at the end of March, is foreseen to offer rent subsidies of up to 50 per cent for small and medium-sized businesses, and cover employee salaries up to 170 euros per month.

The government has set aside 170 million euros for 15 measures, which also include transferring double payments for the months of April and May to existing beneficiaries of Kosovo’s social assistance schemes, and a salary top-up of 300 euros to employees exposed directly to the risk of infection in their work throughout April and May. The finance ministry has said that 43 of the 170 million euros in the emergency package have been spent so far.

In addition to expenses incurred from the package, the finance minister states that the coronavirus will also cost the government millions of euros in lost revenue.

“We have estimated that economic damage in Kosovo will amount to approximately 600 million euros,” Bislimi explained, adding that the numbers come from an economic forecast presented in order to apply for international financial support. “This scenario would see a 10 per cent economic drop compared to last year.”

The minister said that the Kosovo Government received loans worth 52 million euros from the International Monetary Fund, IMF, and 100 million euros from the European Commission. After being questioned over the fiscal responsibility of taking on such a high amount of debt at this time, Bislimi replied that it depends on future economic growth.

“We can’t make money out of thin air,” he said. “How much this will increase public debt depends on what the economic growth will be next year. Until the vaccine arrives, the world is only talking about recovery, and they are saying that since the economy rapidly dropped, there will be rapid growth, too.”

There have been some kinks in the implementation of Kosovo’s emergency fiscal package, Bislimi acknowledged. Those responsible for processing social assistance claims for the unemployed are particularly struggling to handle the volume of applications they have received since Kosovo’s lockdown began.

“The social assistance division was never addressed as a priority by the previous government,” Bislimi said. “Some of these departments don’t even have computers, and now they have had an influx of 70,000 requests. They’ve never seen this many requests before in their entire history of that department.”

Bislimi said that around 30 per cent of the applications processed so far have passed the verification stage, and should have received payments this week. He added that the two cities with the most successful individual welfare applications were Lipjan and Prizren, and the sixth most successful is Leposavic.

However, he noted that many applications failed due to technical errors in the application process, or because the individuals that applied for social assistance were already receiving benefits through a different social scheme or through family members.

Bislimi also mentioned that there had been problems in some northern municipalities over the verification process for applicants seeking 130 euros per month due to “poor social conditions” – as provided for in measure 15 of the emergency package.

The process requires declarations of the employment status of the family, as it is only open to those declared as unemployed by a responsible institution and who are not beneficiaries of any monthly income from the Kosovo budget. “Verification of the status of family members in Serb communities could not be confirmed, which was a problem that we came across,” Bislimi noted.

However, the ministry confirmed for BIRN that Kosovo Serb applicants would receive correspondence from the government in the Serbian language.

The finance minister revealed that there are many individuals who are trying to abuse the schemes outlined in the emergency package by applying without fulfilling the criteria listed in the government package.

“I will not allow this measure to be misused. If there is misuse we need to stop it,” he said. “Some people just try to test the system to see if they can get money. It is my obligation to the taxpayer to identify them.”

Businesses were more likely to abuse the system than individuals, he said, because most of the businesses that applied did so for assistance in paying their employees – a measure that those still operating during the lockdown were able to apply for based on the number of employees that they have and the level of economic risk that they are exposed to.

“Our aim was to help them proportionally to the level that their business was affected. They can’t apply to have salaries covered for all of their employees when they weren’t all affected,” Bislimi explained. “Let’s say I am in the business of drinks production. I can say I was affected because businesses didn’t buy drinks from me. There will be teams assessing this.”

The informal economy has long been an issue in Kosovo, with many employers refusing to register employers in the past in order to avoid paying tax and pension benefits.

However, in order to receive financial assistance with salaries from the emergency package, an employee contract is required from the employer. This has seen around 15,000 new employment contracts created in the last two months for workers previously participating in what is known as ‘the grey economy.’

Bislimi was pressed on the likelihood that these employees were registered purely for financial gain for the businesses – and whether the trend of informal employment, without contracts or lawful registration, would continue after lockdown eases off.

“The package gave instructions as to how this should be implemented,” Bislimi responded. “The operational package says that if after several months the employees do not receive their salaries, the employers must return the money.”

A hotline number (080044440) was installed in order for the Ministry of Finance to receive reports from Kosovo residents concerning abuse of the financial measures in place, as well as to ask for clarifications over the scheme. Bislimi encouraged people to call.

“Someone reported to us that cleaning companies working at QKUK were replacing the names of employees on the list of those to receive salary top-ups with the names of the managers and the owners of the company! We intervened,” he said. “My office is open to giving advice and receiving complaints.”

Work of the finance ministry on hold due to COVID-19

While his office is continuing to implement the emergency package, many of the day-to-day responsibilities of the Ministry of Finance have been postponed.

According to the minister, plans to investigate corruption within the Kosovo Tax Administration and set new targets for tax collection would also have to wait until the pandemic is declared over. “There are new disciplinary measures planned, but I can’t leave the emergency package and deal with KTA reform at the moment,” he said.

Asked about the Kosovo Government’s envisioned reciprocal measures with Serbia, Bislimi said that plans to develop these measures this week have been halted, but will be pursued in future as Serbia has still not eased its economic restrictions on Kosovo.

However, Bislimi was unable to describe how exactly reciprocal measures will be implemented. “I can’t say until there has been an agreement at a governmental level, and when we do that depends on how much space we have to breathe,” the finance minister said. “You can’t imagine how much work we have at the moment.”

Ease in lockdown restrictions in time for diaspora influx

According to Bislimi, Kosovo’s diaspora donated more than half a million euros to the state following the announcement of the coronavirus pandemic in March. This money was not fed into the emergency fiscal package, however.

“There was an internal decision from the ministry not to use this money for the emergency package, but to instead use it for the purchase of medical equipment, so that people know what was bought with these donations,” he said.

Bislimi added that Kosovo residents should not be worried about an economic downturn caused by a lack of diaspora returning to Kosovo in the summer months. “Remittances from the diaspora continue at the same rate as last year, and we can’t appreciate this fact enough,” he said. “The diaspora should return to Kosovo at the same pace as normal, as German and Swiss borders should reopen soon and flights will become regular again.”

The National Institute of Public Health will ease restrictions on people entering Kosovo throughout summer as much as possible, he noted, saying that individuals will not be required to go through a 14 day quarantine period upon arrival to Kosovo.

“It will soon be reduced to only one week of quarantine, and the National Institute of Public Health is working towards issuing a decision that would relax these rules even further in the near future,” Bislimi said.

Bislimi was also posed a question by a citizen in the audience about the opening of schools and kindergartens – an economic question as many women will not be able to return to work on 1 June because of a lack of child care.

“We can not resolve all the issues of a health crisis with economic measures,” Bislimi said. “But I assure you ,that if we look at the list of beneficiaries from the emergency scheme, 60 percent of beneficiaries will be women.”