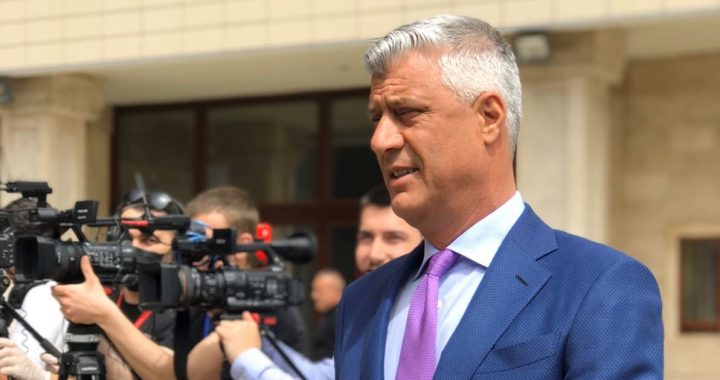 Thaci states he won’t participate in negotiations led by Lajcak

President Thaci continued to push for US leadership in the Kosovo-Serbia dialogue on Tuesday, stating that he has “no will to participate” in negotiations led by EU special representative Miroslav Lajcak.

In a press conference held after a visit to the Kosovo Chamber of Commerce on Tuesday, President Hashim Thaci stated that he does not “have the will to participate” in negotiations led by the EU’s Special Representative for the Kosovo-Serbia dialogue, Miroslav Lajcak.

Thaci welcomed the EU’s renewed engagement in the dialogue, but insisted he had not been in contact with the newly-appointed diplomat. “Any will from the European Union in this regard is encouraging,” he said. “But, personally, I am not in contact with Lajcak.”

He attributed this lack of engagement with Lajcak to the diplomat’s relationship with acting prime minister and political rival of Thaci, Albin Kurti, who has communicated with Lajcak and the EU’s High Representative for Foreign Affairs, Josep Borrell, on the subject of the dialogue on several occasions.

“Kurti has been in contact with him for three months and I do not know how far the talks have gone, Lajcak-Kurti-Borrell,” Thaci said.

The president also reiterated his criticism that the EU’s two representatives were both representatives of countries that do not recognise Kosovo, with Lajcak a Slovak citizen and Borrell a citizen of Spain. “We must be aware that we are an independent and democratic country and in front of us we have two negotiators who have not recognized the independence of Kosovo,” he said.

However, Thaci welcomed the participation of other EU leaders in future talks between Kosovo and Serbia, indicating he would respond to invites from the German Chancellor and the French President. “Personally, as President, I will respond to invitations to summits led by [Angela] Merkel, [Emmanuel] Macron etc.” Thaci said. “But I do not have the will to participate in the negotiation process led by Lajcak.”

Thaci also repeated his belief that the US should have what he has previously described as “a leading role in the dialogue.”

“It is encouraging to see the commitment of the US administration, President Trump and his Special Envoy Richard Grenell, to push things forward as fast as possible,” Thaci stated, before stressing the need to “differentiate between strategic partners” that have the capacity to both lead and conclude the negotiations, and implement the deal agreed.

“I have full trust in the US leadership,” he said, adding that only the US was capable of finalising issues in the Balkans, particularly “the difficult and delicate issues between the states of Kosovo and Serbia.”

Thaci added that Kosovo should soon be in a state to resume the dialogue following the coronavirus pandemic and recent political instability, but insisted that “no one can set the day or the week when the dialogue will continue between Kosovo and Serbia.”