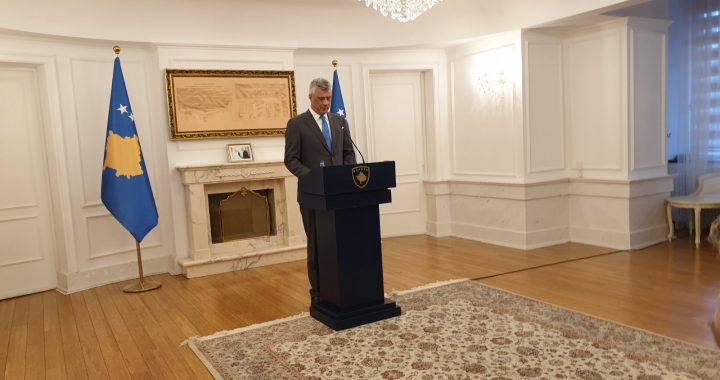 Following his visit to Washington DC, Kosovo President Hashim Thaci has publicly criticised the EU’s role in the dialogue and states that US involvement presents a historic opportunity for a final agreement between Kosovo and Serbia.

At a press conference held in Prishtina on Wednesday, Kosovo President Hashim Thaci has criticised the role of the EU in the Kosovo-Serbia dialogue and described the US as now “having a leading role”, following a visit to Washington DC.

Thaci stated that the meeting held on Monday at the White House between himself and Serbian President Aleksandar Vucic, was significant as it marked the return of the U.S. to the search for a final agreement between Kosovo and Serbia.

“[It] marks a willingness to continue the dialogue [and] makes an agreement closer,” he said. “It is likely that something will be achieved that has not been achieved in two decades.”

Addressing the role of the EU, who have mediated the Kosovo-Serbia dialogue since 2011, Thaci said that “the achievements of the Brussels dialogue should be appreciated.” However, he added that the process “unfortunately did not achieve exactly what we wanted, but it did reach the potential that could be achieved in Brussels.”

The president stated that the EU had failed to convince five of its member states to recognise Kosovo, and it seems unlikely they will ever convince Serbia. “The EU has been unjust, deceitful and punitive,” he said.

The president went on to say that new possibilities have now been presented by the increased attention on Kosovo by U.S. President Donald Trump and his envoy, Grenell.

“We have the chance now, not tomorrow. We have the support of president Trump, and the attention of Special Envoy Grenell. We have the chance to close the chapter of war with Serbia,” Thaci stated, adding that the price of not taking this chance would be “stagnation, the status quo.”

Responding to questions, Thaci stated that there is also an economic incentive for US leadership. “America wants billion-dollar investment in Kosovo,” the president said. “We should not delay. We need to move from this frozen state of the status quo to membership in NATO, the EU and other organizations. All of Kosovo’s leaders are replaceable, but the US’ role is irreplaceable.”

The president stated that any final agreement between Kosovo and Serbia will be in full accordance with Kosovo’s constitution and will ultimately be ratified by the Kosovo Assembly.

Thaci also called for “unity between Kosovo’s political institutions.” Earlier in the day he declined a public invitation from Prime Minister Albin Kurti to discuss Kosovo’s foreign policy, stating that he will meet the leaders of all political parties represented in the Kosovo Assembly in the coming days.

On Monday, Kurti sent a letter to US President Trump, in which he stated the new Kosovo government, elected by the Kosovo Assembly on February 3, would take “full and exclusive charge” of the dialogue process.

Before the press conference, the Office of the President requested a session of the Kosovo Assembly to be held on Wednesday in order to inform MPs about his trip to Washington. However his request was declined by Speaker of the Assembly Vjosa Osmani, who stated a session would not be possible before March 9.