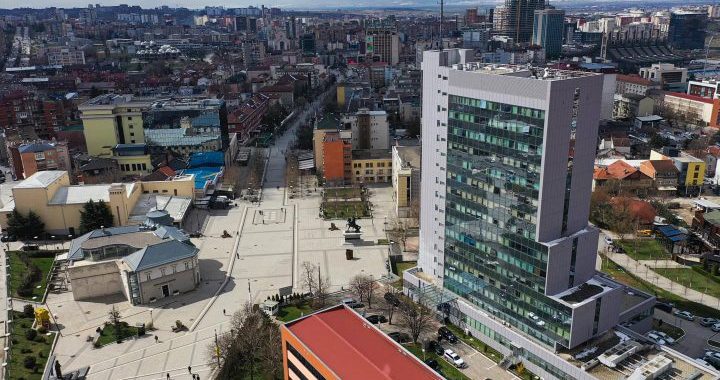 Financial Intelligence Chief Dardan Nuhiu is shown the door after alleged recordings of him are published in which he boasts of plans to 'capture' the main media in the country and deploy them for his own benefit.

Finance Minister Hekuran Murati has announced the dismissal of the head of the Financial Intelligence Unit after he discussed plans to control the media for his own personal interests in leaked audio recordings.

Dardan Nuhiu was sacked on Tuesday after the recordings of him talking about abusing his position were published early this week.

“After reviewing the audio recordings published in the media yesterday and today, which implicate the Director of the Financial Intelligence Unit, the Supervisory Board … has decided to dismiss him with immediate effect,” Murati said on Tuesday.

Kosovo online news portal Shqip.com published the recordings on Monday and Tuesday. In the recordings, Nuhiu could be heard saying he planned to take control of important media outlets in order to apply pressure on various public figures for his own benefit.

“In a couple of years, I will have captured all the strongest [media],” Nuhiu is heard saying in the recordings. He adds that after being “in charge” of the media, he will be the one deciding matters.

Nuhiu is also heard claiming that he was already in talks to get 50 per cent of “two strong portals”. He mentions the Kosovo media outlet Indeksonline as one of them and Insajderi as the second.

Indeksonline director Faton Shoshi, claiming Nuhiu is his “best friend”, told BIRN that he “could not believe Dardan [Nuhiu] is the one speaking … I have never had an offer from him to buy Indeksonline”.

Vehbi Kajtazi, co-director of Insajderi, told BIRN he has doubts about the authenticity of the audio recording. “I do not have an official confirmation that the person speaking is Dardan Nuhiu,” Kajtazi told BIRN, explaining he has known Nuhiu for a long time.

“Many ‘political regimes’ … have tried to hit me and Insajder, but have not succeeded even when I was physically beaten, threatened or lynched,” Kajtazi added.

BIRN contacted Nuhiu, the Ministry of Finance, and the Financial Intelligence Agency on the authenticity of the recordings, but did not receive an answer by the time of publication.

The same portal Shqip.com also published an audio recording on July 30 in which the Prishtina Serious Crimes Prosecutor, Shemsije Asllani, was heard telling an unknown person that she will do her best to help him with the case.

Asllani is also heard claiming she has connections at the Kosovo Intelligence Agency, KIA, knows various judges and has “friends” in other institutions who protect her.

The chairman of the Supervisory Commission of the KIA told BIRN that the issues raised by this would be discussed at the commission’s next meeting.

The Prishtina Prosecution office told BIRN it had no information on whether a procedure against Asllani had been started based on the published recordings. Asllani also did not answer questions put by BIRN by the time of publication.

BIRN also contacted the Chief State Prosecutor, Aleksander Lumezi, the Chief Prosecutor of Prishtina, Kujtim Munishi and the Kosovo Prosecutorial Council, but did not receive any answers from them by the time of publication either.

Minister of Justice Albulena Haxhiu on Wednesday said that in light of the audio recordings, there is no alternative other than to start a thorough vetting process in the judiciary. “Kosovo needs a vetting [system] and the Justice Ministry is working on this,” the minister said.

Civil society representatives said the recordings were no surprise. Ylli Zekaj, from the Kosovo Law Institute, told TV station Dukagjini on Tuesday that they only proved what was already being said for years.

“In our monitoring we have said that the state prosecution and the judiciary are influenced by different interest groups … The response from the state so far has been weak,” Zekaj said.

Zekaj said the public should be informed about the course of these processes, s the audio recordings would have an impact on people’s trust in the judiciary while the recordings confirm the need for a vetting of the judiciary.