Former Inmates of ‘Prison from Hell’ Recall its Grim Secrets

The slit of the door of the place where they were tortured still reminds former Kosovo Albanian political prisoners of their ordeal in the Prishtina prison that has now become a museum.

In the middle of the dark room at the end of the narrow corridor of the Prishtina Prison, a single chair still stands in front of which is a razor, with which the dry skin of Kosovo’s political prisoners was cut — but not only for shaving purposes.

Ramadan Nishori, from Komoran village in Drenas, then 19 years old, did not have a beard – but this was no obstacle for the Serbian barber who used his fresh face for the “art” of torture.

“I was only 19 when we were ‘shaved’ in this prison, on a dry face,  even though I didn’t even have a beard. The Serbian barber used to beat us. There was an Albanian guard, too, who was the head of the shift, and he beat us more than the Serbs,” Nishori, now 46, told BIRN.

Walking behind the bars of the prison, Nishori recounts sad memories of mistreatment during the seven months he spent in this prison, of a total of three years in jail.

In the small room, there were four to eight prisoners. Above was a small window surrounded by shutters, which evoked more anxiety than hope of freedom. On the side is a small bathroom, which did not exist then. It was built after the Kosovo war. During the years when Kosovo Albanian activists were imprisoned here, they carried out their physiological needs in bottles, which they call kiblla. 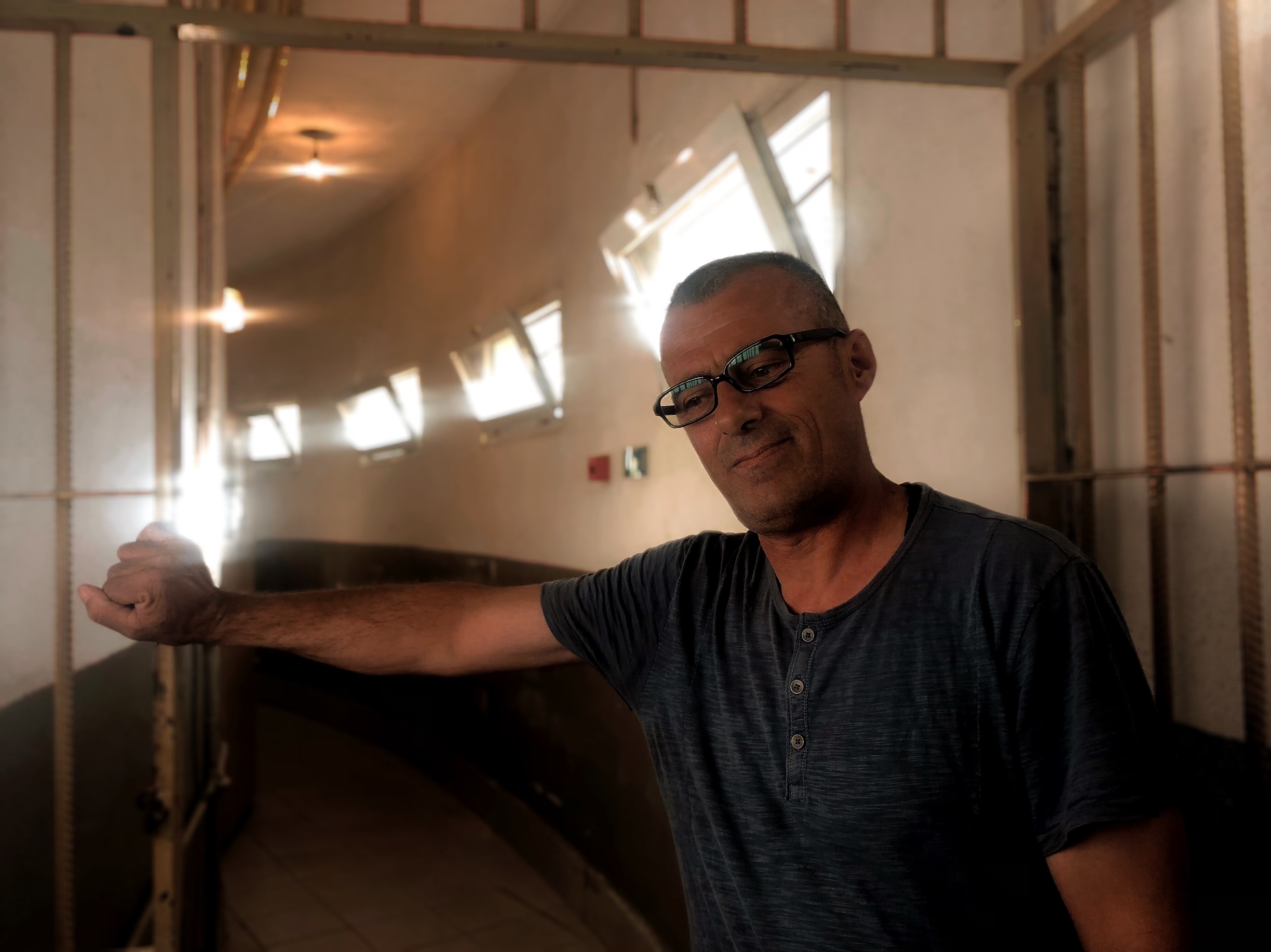 “The one who carried the garbage can had to hold the bucket with one hand, the other behind his back, and you didn’t dare raise your head at all because they’d beat you. They beat us non-stop and mistreated us in an inhuman way,” says Nishori.

Nishori together with other former political prisoners visit the prison, that on Tuesday opened its doors as a museum for the first time.

The infamous prison was built in 1951 in the communist era and was mainly used to hold Albanian political prisoners.

It closed in 2016, after constant complaints about the poor conditions. The decision to turn the prison into a museum was taken in 2020 by the government of Kosovo.

“I remember all the horrors from the day I entered here, not only when I enter here but also when I pass here on the street,”  Nishori adds with tears in his eyes.

Wandering around the rooms and cells, Nishori says that he had experienced so much torture in the prison that for three weeks he walked without shoes due to his swollen feet. When family members visited once a month, despite his longing for them, he had hesitated to meet them, so that they would not see him in that state.

“They tied our hands to radiators and took the chair and turned our legs back in the middle of the chair and beat our soles. My ears were as wide as two fingers. I never thought that ears could be made like that, except that they were being beaten,” he says.

Food was scarce. Prisoners were forced to share one piece of bread for three meals. According to Nishori, only then did he understand that man is stronger than stone.

“It was better not to eat than that piece of bread. That one piece increased our hunger more than it satisfied us,” Nishori says. He also confessed a bitter memory of the years spent behind bars, as he pointed to the room at the end of the corridor.

A small plant in the crack in the concrete of the prison yard gave the prisoners hope of life. Today there is a grown-up fig tree there that bears fruit.

“A plant had come out of a crack in the concrete, and even when we looked at it, it gave us a little life, and if we plucked it, it seemed to us that we had less life left,” another ex-prisoner, Shaban Çupi, from from Paldenica village, in Hani i Elezit, told BIRN.

Another former prisoner, Emin Sallahi, says the tree cannot grow fully near the wall, “even though it can grow a little near the wall, and can also bear fruit, it will never reach the height and bear the fruit of a tree which grows in freedom from all sunny sides”.

In the same yard, in the middle of the winter frosts, they cleaned themselves and walked on the ice in a counter–clockwise direction. All of them lined up to be cleaned for five minutes, but only once a month. 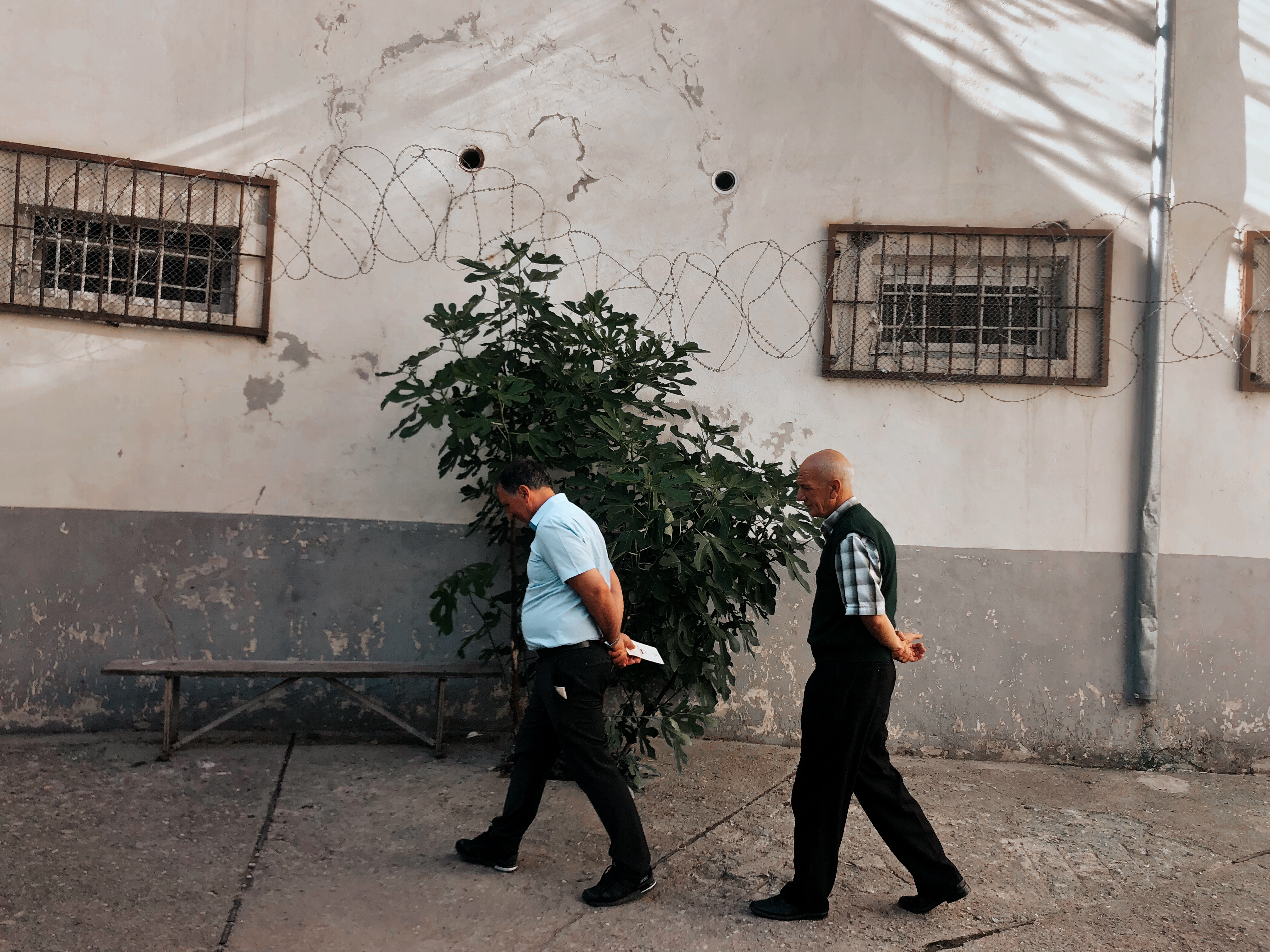 Former political prisoners Bajram Dërnjani and Shaban Çupi visit the Prison of Prishtina. They shows how in the middle of the winter frosts walked on the ice in a counter-clockwise direction Photo: Antigonë Isufi/BIRN

“Showering with misery in this prison where there is nowhere to go. Out here we were naked and cleaned a lot of people. But it was better not to clean than to clean, especially in winter. We couldn’t even pass our urine here because it was all ice,” says Shaban Çupi, demonstrating how they were forced to walk through the yard.

In the background could be heard the deafening noise of the prison and the creaking doors. That creaking, whistling sound still has a psychological effect on Çupi. Sentenced to six years in prison, he managed to maintain his ideals and find ways to survive. Although it was dangerous to read books, inside the prison he had managed to read the book Brigjet by Esat Mekuli.

“Here, the person was broken, but the ideal kept us going. Here, we wrote imaginary poems. We wrote poems and stories secretly, the thread of a match was our pencil, this part of the cigarette was our paper,” he recalls in despair, but also with pride.

Çupi stayed in room number four of the prison twice from 1987 to 1988. Due to the dirt during these years, he says that scabies was inescapable, while the food was terrible.

In addition to physical violence on a daily basis and beatings, according to him, they were also placed in prison with schizophrenic people, to torture them mentally.

“One was a political prisoner, another a murderer, another a rapist and the other a thief…. They made it the goal that three parts rule one part and suppress it. The fundamental struggle of the UDBA [secret services] was to make us mentally capitulate,”  says the former prisoner.

Çupi is also a survivor of the Dubrava massacre. He sadly says he lost more than 120 friends to their ideals. After the war, he wrote over 18 books. And for all these experiences, he does not seek praise but only to be heard and appreciated. 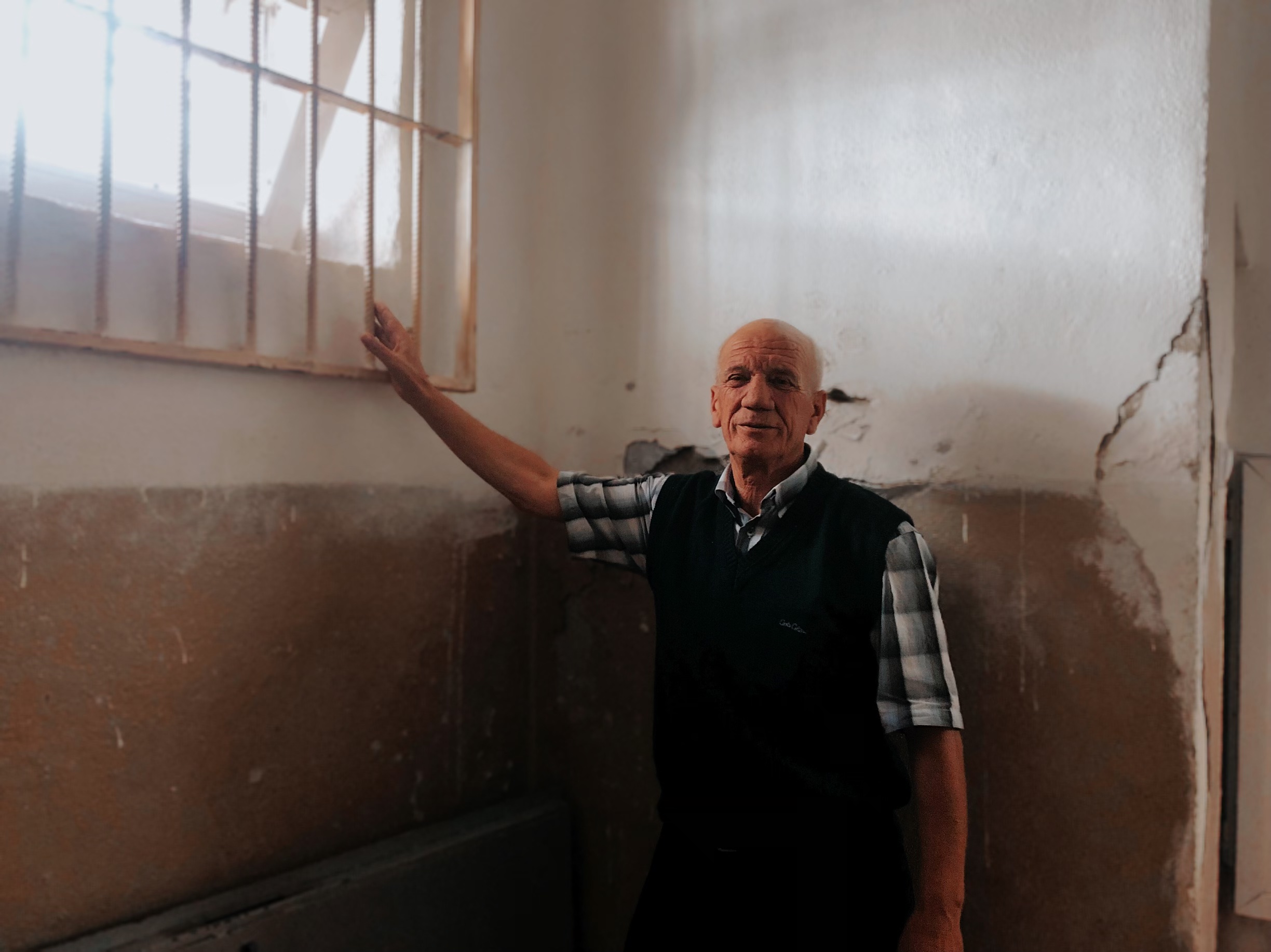 Death passed before his eyes

Idriz Isufi saw the horror with his own eyes both as a prison guard in Prishtina and as a former political prisoner. From the blood and torture he has seen, he says he often does not sleep at night.

From 1977 to 1982, while Isufi worked in this prison, he saw more blood than anything else. In 1982, he was sentenced to three years in prison there himself. Out of all these days, he says he spent 95 days in complete solitude without any human voice around.

As a prison guard, Idrizi recalls one of the worst cases he experienced, when a political prisoner attempted suicide.

“He was bleeding so hard that you couldn’t stop it, I stepped on his hand to stop the blood, and it was about to stop, so we sent him to the hospital without their [administration] permission because they didn’t allow us to. After seven hours of surgery, the doctor said that in 20 minutes he would have died of the bleeding,” he says.

According to Idrizi, there were cases when the prisoners had no food to eat, and other cases when 10 people waited in line in the cold to take a shower “just so that the water touches the skin”. 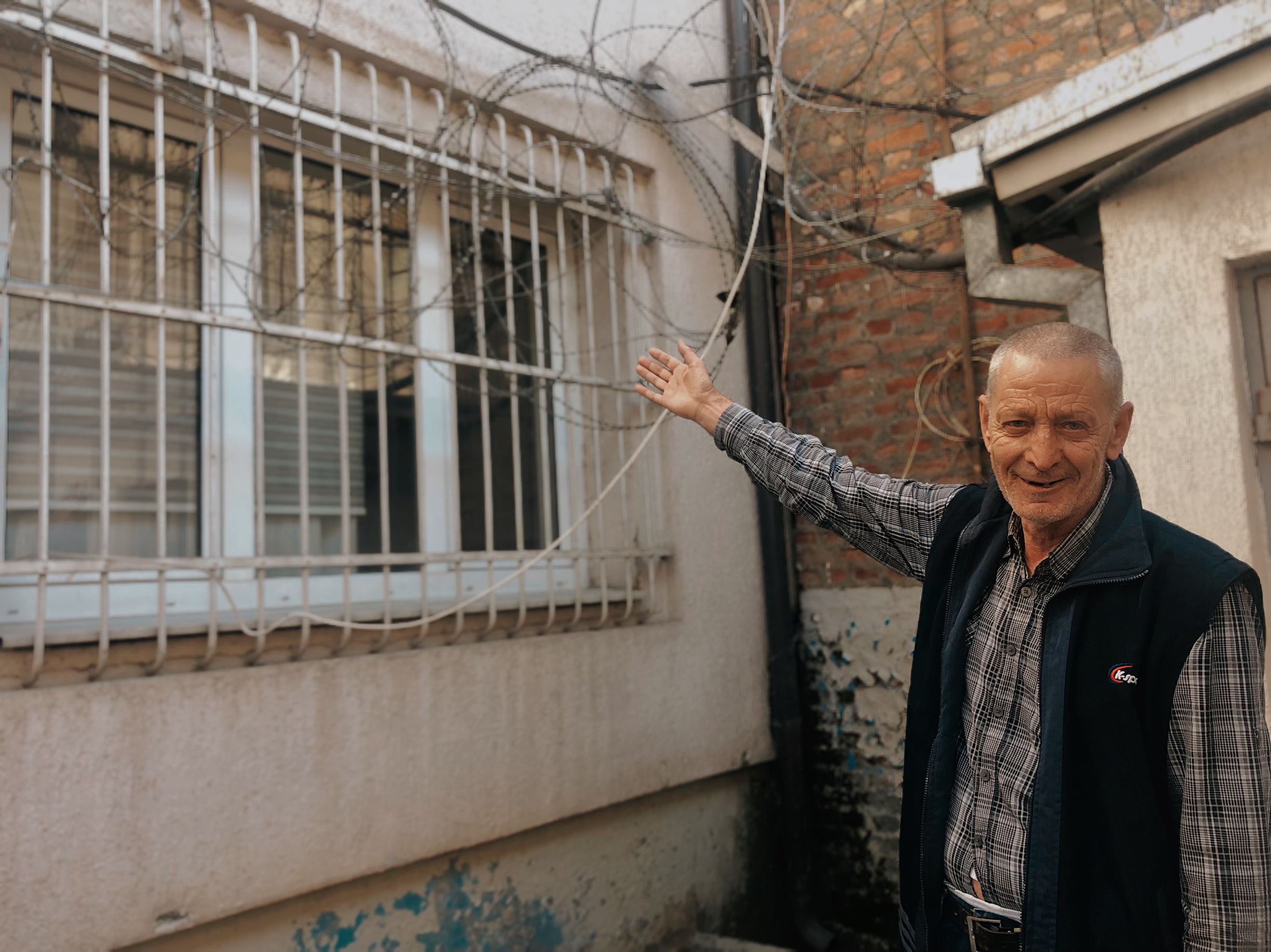 He told BIRN he had seen a prisoner, Halil Alidema, on the verge of death, with his own eyes .

“When they brought him from the state insurance inspectorate, my colleague kept him in the back. When he [the guard]  entered the door, he called for me to help him, and when we sent him to the room, we let him go slowly, so as not to hurt him, but at that moment his blood burst. I’ve seen people bleeding, but never seen anybody with blood coming out of his eyes and ears,” he revealed.

The former guard said that Halil was tortured until he lost consciousness. According to him, they took him and sent him somewhere and for two months no one knew if he was alive or dead.

“They sent him to the military hospital in Kukës to save his life. He was in a coma for 27 days. After 27 days he saw himself in the hospital and he told himself that he had come to the hell of the Serbs, because they were all speaking Serbian,” he added. 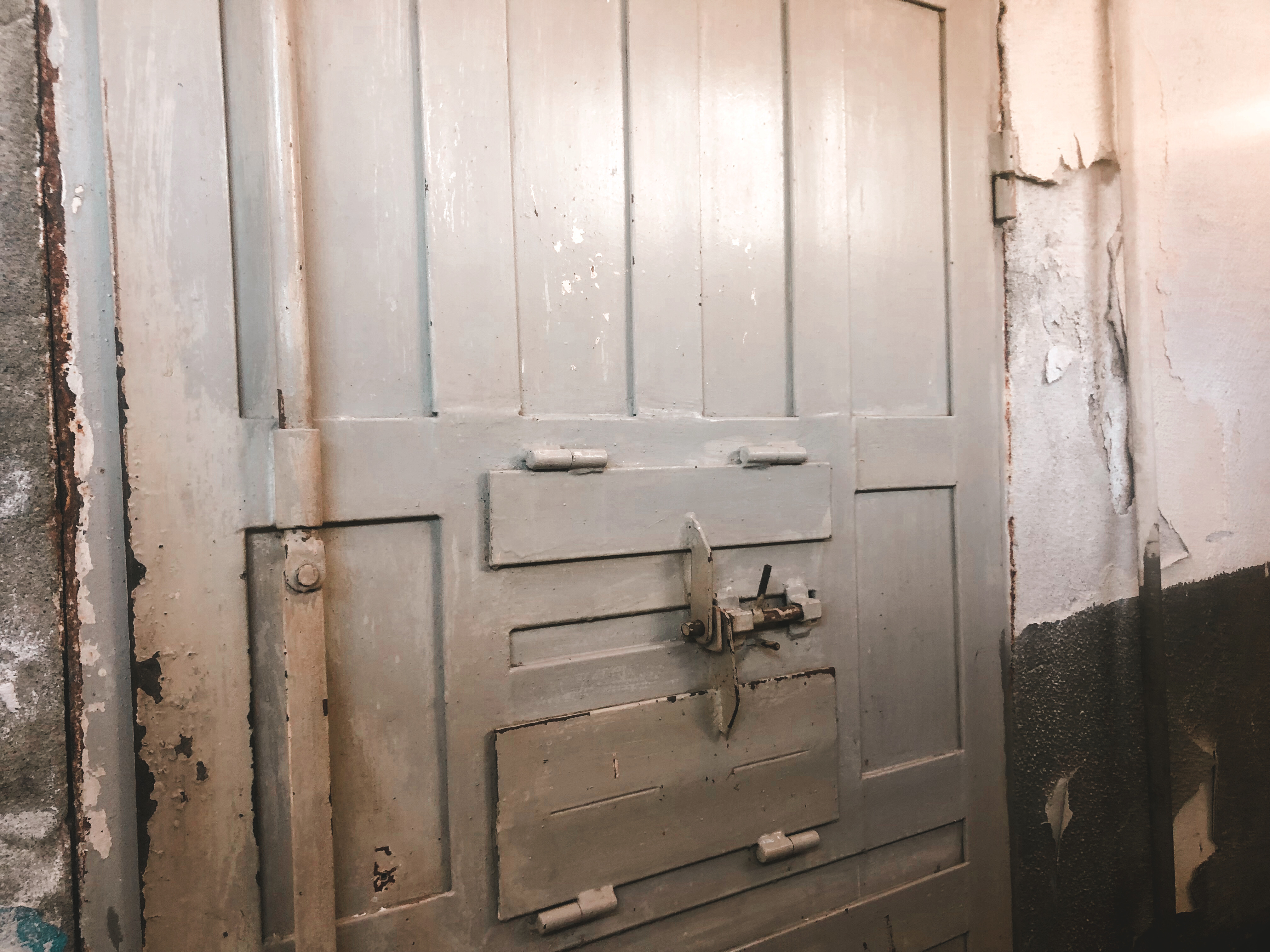 Beaten for a song he never sang

For the song that he had not even sung, Bajram Dërnjani from Kaçanik experienced beating pain in every part of his body.

“A Serbian guard entered and said: Which one of you sang? None of us. I was the target, so they took me out and tortured me terribly. They took me out into the corridor and hit me on every part of my body,” he told BIRN.

Sentenced to five years of imprisonment in different prisons, Dërnjani had only taken two exams before graduating from the Faculty of Law before his arrest. After being released from prison with an amnesty, he graduated. 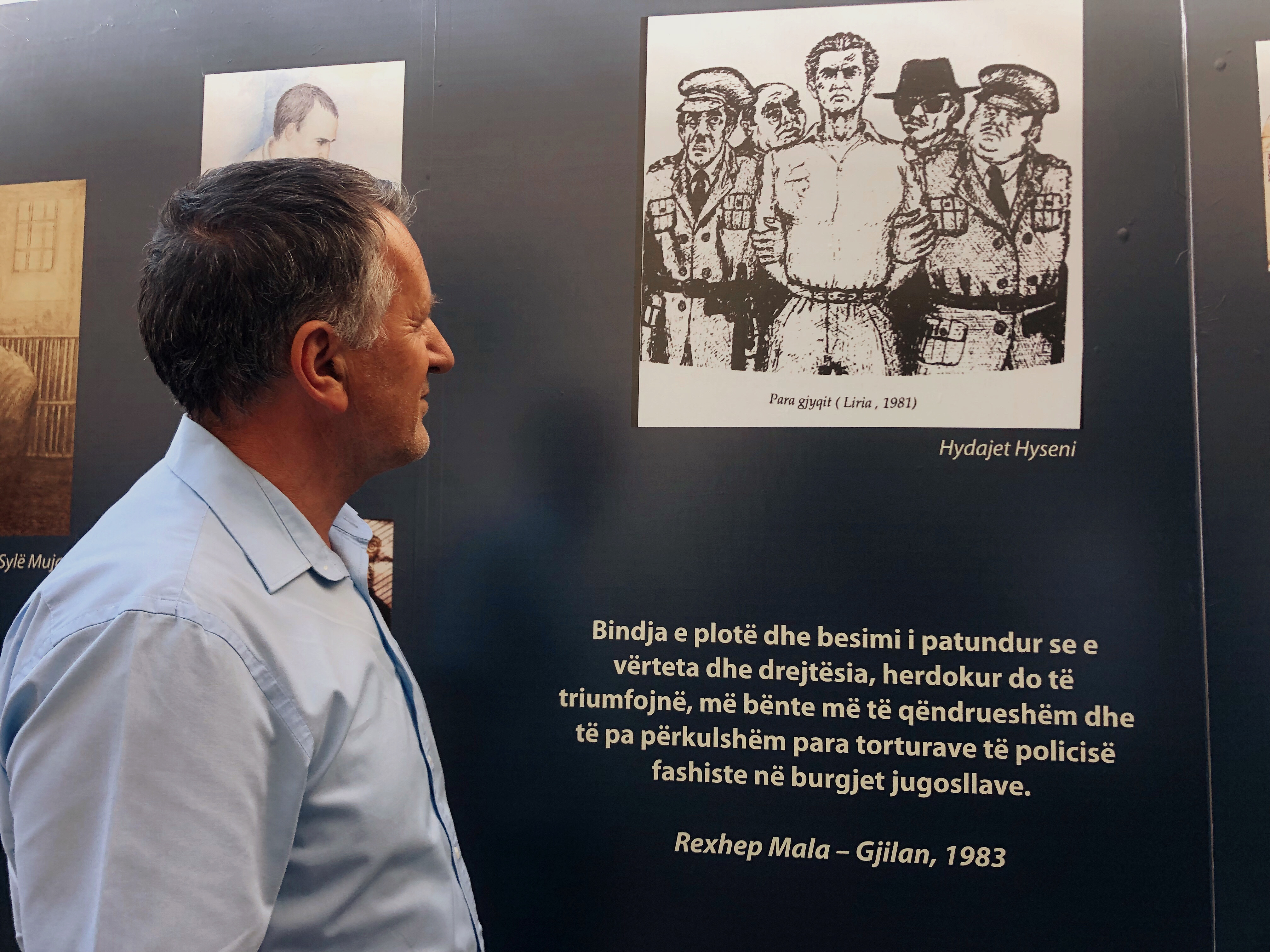 “I have the physical consequences, but we stayed strong. Kosovo should not only have become a state, but all the territories should have been liberated and unified. This was our main ideal,” he says.

Dërnjani shared a memory of when the Serbian regime released him from prison with the amnesty. At midnight, the officers, in order to fulfil the documentation, had asked him as a provocation if  they should write the name of his country as the Republic of Kosovo or the Autonomous Socialist Province of Kosovo.

“I said, you are the official, write it as you want. But if  you ask me, write ‘Republic of Kosovo’. The officers then replied: ‘I would have never released you, but since the order from above is otherwise, I have to,’” Dërnjani told BIRN.

As the doors of the  prison-turned-into-a-museum open for the first time for its old inhabitants, they say to each other: “Welcome to the Prison”. And other former inmates respond with a smile now, saying: “No one is welcomed to this prison any more, but people are welcomed into the prison museum”.

Kosovo MP’s Calls Seen as Threat to Freedom of Speech