Witnesses at the high-profile trial for the murder of Kosovo Serb politician Oliver Ivanovic have been reluctant to name suspects or have altered their testimonies about organised criminal groups, seemingly out of fear of retaliation.

I did not promise anyone that I would change my statement, but I am not insane enough to risk my family,” a witness in the trial for the murder of Kosovo Serb politician, Oliver Ivanovic, told Pristina Basic Court on November 24 last year.

The witness said he wanted to change his initial statement because he was afraid, explaining that there is an informal “law of silence” in the Serb-dominated north of Kosovo, where Ivanovic was assassinated in January 2018, and that he made a mistake by getting involved in the legal process.

Since the Ivanovic murder trial began, journalists and court monitors who have been following the politically-sensitive proceedings have become accustomed to hearing similar testimony from witnesses who say they are too afraid to repeat the testimony they originally gave during the investigation of the case – and too afraid to say the names of the alleged organisers of the politician’s assassination.

As well as frightened witnesses, Kosovo’s justice system has had problems with suspects who are on the run, non-cooperation from the authorities in Serbia, and accusations that that the prosecution has not been handling the proceedings properly by focusing on a suspect who is not even on trial.

It is not clear how long the trial will last, or whether witnesses will shed light on the shooting of Ivanovic in front of his political party’s offices in the Serb-majority northern part of the divided city of Mitrovica. But one thing is clear: reluctance to confirm previous statements, fear of naming names and some witnesses’ requests to change their testimonies has become a theme of the trial.

The witness who appeared on November 24 said that he does not stand by his previous testimony, explaining that “I had said the [Serbian] government is responsible [for Ivanovic’s death], but today I do not have the same opinion…  I live in North Mitrovica and my children need to continue their education in Belgrade.”

Of 11 witnesses who have testified so far, only two have fully stood by their initial testimonies given two to three years ago to Kosovo’s Special Prosecution, in which they named alleged members of criminal groups from Kosovo’s Serb-majority north.

At the time he was killed, Ivanovic, leader of the Freedom, Democracy, Justice political party, had also become increasingly vocal in his criticism of the Belgrade government, which has huge influence over Kosovo Serbs. He had also complained about the power of Serb organised crime gangs in Mitrovica – people he described as “local bullies and gangsters”.

The indictment in the case accused Ivanovic’s political rival Milan Radoicic, a powerful businessman and vice-president of the Belgrade-backed Srpska Lista political party, of being the leader of the criminal group that organised the murder, together with another Kosovo Serb businessman, Zvonko Veselinovic. Both denied any involvement and neither man is on trial.

In an interview with BIRN not long before his death, Ivanovic described Radoicic, a truck company owner and debt collector, as the real power-holder in the Serb-majority north of Kosovo. Ivanovic also said several times before he was killed that he and his family had received threats.

Radoicic’s high-level political connections in Belgrade have made the case even more politically sensitive. Serbian President Aleksandar Vucic even declared in July 2019 that Radojicic is innocent. “Milan Radoicic is no flower, but he did not in any way participate in the liquidation [of Ivanovic],” Vucic said.

In a sign of how close Radoicic is to the Serbian leadership, he was photographed sitting next to Vucic at a meeting in Belgrade on March 23.

In the trial, four defendants – Marko Rosic, Silvana Arsovic, Rade Basara and Nedeljko Spasojevic – are accused of abetting the murder, and two policemen, Dragisa Markovic and Zarko Jovanovic, are accused of evidence-tampering.

The original prosecutor in the Ivanovic case, Syla Hoxha, and lawyers for the defendants seem to agree the witnesses have been intimidated and even fear for their lives because they live in northern Kosovo, where Ivanovic was assassinated and where another politician, Dimitrije Janicijevic, was shot dead four years earlier. Janicijevic’s killers were never brought to justice. 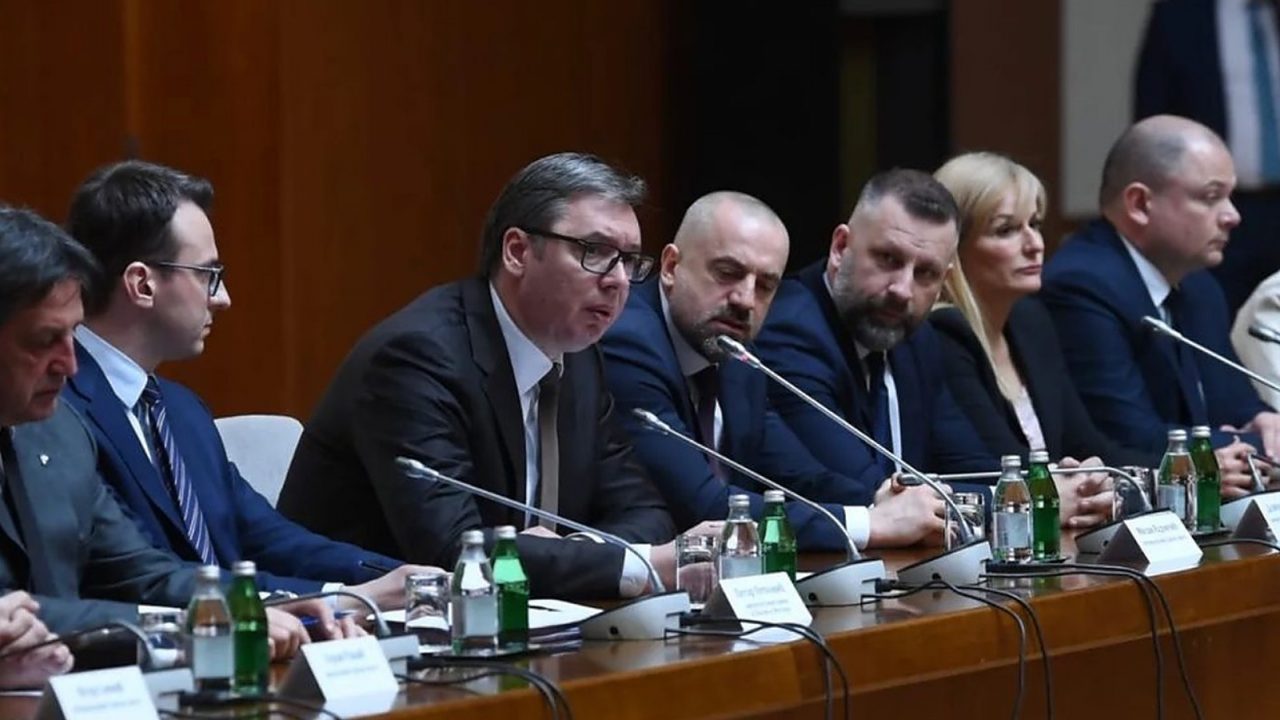 Aleksandar Vucic meets representatives of Serbs in Kosovo including Milan Radoicic (right side of Vucic) on March 22. Photo: Aleksandar Vucic/Instagram.

Giving testimony in court in November, Ksenija Bozovic, who was the vice-president of Ivanovic’s Freedom, Democracy, Justice party, declined to name the individuals – allegedly members of organised criminal groups – who Ivanovic had told her before his death were threatening him.

“If someone tells you to be afraid of organised criminal groups, they should have told you who” presiding judge Valon Kurtaj told Bozovic.

But Bozovic denied that Ivanovic had specified who was threatening him and insisted she “was not pressurised” to withhold the names.

Faruk Korenica, the lawyer for defendant Nedeljko Spasojevic, told media after the hearing that “the witness in my opinion is very scared and is not telling the truth”.

Musa Damati, the lawyer for defendant Silvana Arsovic, told BIRN, that in almost all the testimonies so far “a change to [previous] statements, to some extent, has been noticed”.

On February 22, two witnesses expressed reluctance to repeat previous testimonies in which they accused alleged members of a Serb criminal gang of wrongdoing.

The first witness, Radmila Rajcic, had said in the initial testimony that she gave to investigators in December 2018 that “Ivanovic was murdered by the same criminal group [led by Milan Radoicic]” as her son had been.

In court, however, she refused to repeat this allegation. “I am not sure, I do not deny my testimony but that was only my opinion,” she said, claiming that what she said previously was only based on rumours.

The second witness, Dragan Jablanovic, from the Kosovo Serbs Party (Partija Kosovskih Srba), who was the mayor of the Serb-majority municipality of Leposavic until December 2017, a month before Ivanovic’s murder, also was reluctant to repeat his initial testimony from 2019.

He had mentioned one occasion when he was prevented from entering his office by at least five unidentified people, who told him that “Milan Radoicic paid us 1,000 euros each to not let you enter your office”.

In court however, Jablanovic declined to mention Radojicic, saying that “I was not told who paid them but only that they were paid 1,000 euros each to prevent me from entering the office”.

“The pressure which maybe has been exerted from external factors on certain witnesses” might have led to this difference in testimonies, Damati claimed.

Even witnesses who have not changed the testimony have expressed fears about their security. Aleksandar Jablanovic, a former minister in the Kosovo government, told the trial in February that he and his family had lived in fear since 2015, when he was first allegedly threatened by Radoicic.

After Ivanovic’s murder, Jablanovic claimed that Radoicic warned him to “be careful”, but said he had nothing to do with the Kosovo Serb politician’s assassination.

Milena Ivanovic, the politician’s widow, also warned Jablanovic, saying: “Be careful, bandits killed my Oliver,” the former minister testified, saying she did not mention names, but that he understood that she meant “Milan Radoicic and Zvonko Veselinovic”. 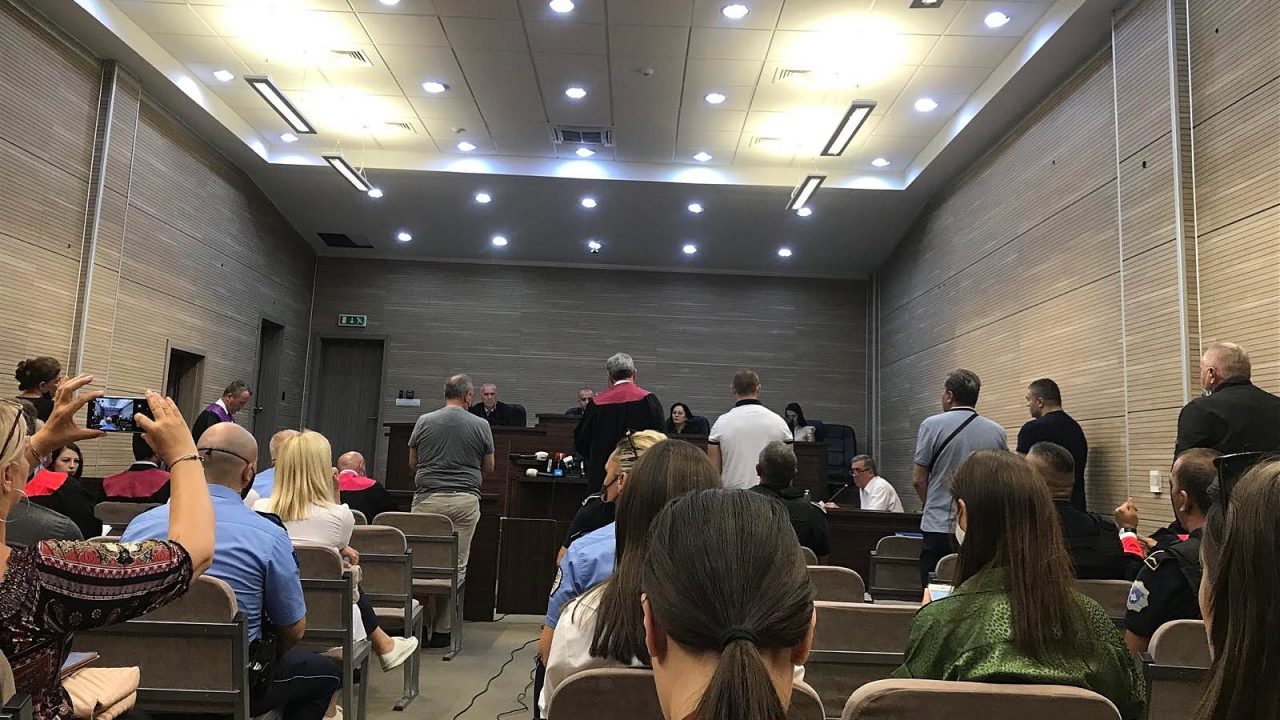 The opening of the Ivanovic at the Pristina Basic Court on July 6, 2021. Photo: BIRN.

The names of Milan Radoicic and Zvonko Veselinovic have been mentioned so many times and been the subject of so many prosecution questions at the Ivanovic murder trial that it has made observers wonder whether the two Serb businessmen if the proceedings are actually being used as some kind of investigation into the two Serb businessmen’s role in the assassination rather than an attempt to convict the defendants who are in court.“The trial has been turned into an investigation for the murder of Oliver Ivanovic,” Mahmut Halimi, the lawyer for defendant Jovanovic, said last month.

Prosecutor Burim Cerkini declined to speak to BIRN about the trial, but the lawyers for the defendants constantly have repeatedly accused the court of calling witnesses whose evidence is not directly related to the indictment.

Halimi also said that no witness so far has managed to offer any significant evidence proving the defendants were involved in the crime, and argued that the prosecution is trying to use “circumstantial evidence” to “put one or more of the defendants into the frame of responsibility”.

Damati, the lawyer for defendant Arsovic, said that each witness so far has said they either do not know her, or know of her as Ivanovic’s secretary, who he highly respected.

“All the witnesses so far have confirmed in trial sessions they do not know her [Arsovic] in any incriminatory way,” Damati said.

Only two witnesses have mentioned defendant Rosic so far. One of them claimed he had information that Rosic had “followed the late Oliver [Ivanovic], set fire to his car and was in Milan Radoicic’s [criminal] group”. Ivanovic’s car was torched in July 2017, which he described as a message aimed at scaring him into quitting politics. 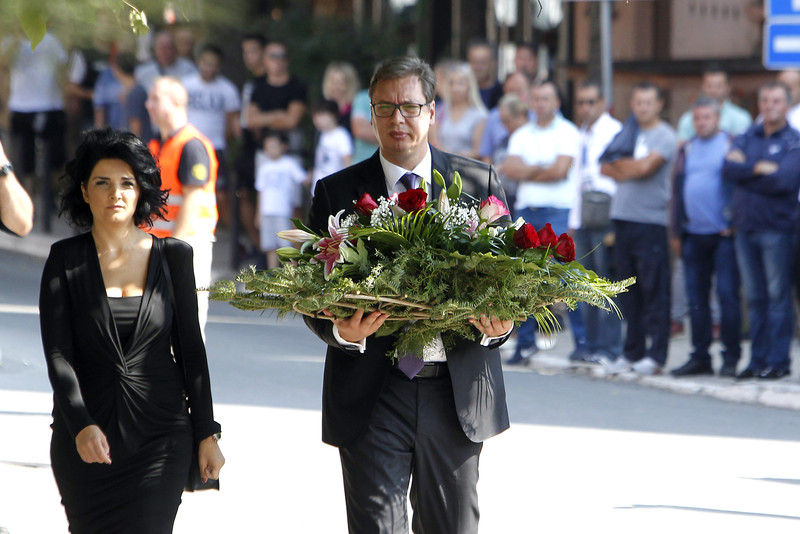 Aleksandar Vucic lays a wreath with Milena Popovic, widow of assassinated politician Ivanovic, at the spot where he was murdered in Mitrovica, September 2018. Photo: EPA-EFE/DJORDJE SAVIC.

Hearings in the trial have been held relatively regularly, with only a couple of sessions postponed due to the COVID-19 pandemic, but lawyers are prepared for proceedings to continue for several years.

Prosecutor Cerkini has suggested that certain witnesses’ testimonies should be read out in court in order to speed the process up, rather than having them take the stand. Most of the lawyers agree.

Halimi said that most of the witnesses who have not been heard so far mainly talk about the political situation in Serb-majority northern municipalities of Kosovo prior to the 2017 elections, when Ivanovic was running against a Belgrade-backed Srpska Lista party candidate for mayor of the North Mitrovica municipality.

“There are a couple of analysts, a couple of investigative journalists who do not provide concrete information… [but] explain that the murder was committed for political reasons [because of Ivanovic’s opposition to Srpska Lista],” he explained.

Some of these witnesses also allege that “Ivanovic refused to sell some premises to Radoicic, which created hostility between them that led to the murder”, he added.

One of the main issues that has prevented more progress in the case seems to be the Belgrade authorities’ non-cooperation with Pristina. As Damati pointed out, “international judicial cooperation between the state of Kosovo and Serbia does not exist” because Serbia does not recognise Kosovo as independent.

The former prosecutor in the Ivanovic case, Syla Hoxha, has said that Serbia hampered the initial investigation by refusing to cooperate and hand over potentially vital evidence such as mobile phone records.

An agreement on “mutual legal assistance” between Belgrade and Pristina was brokered by the European Union in 2013, but cooperation on criminal cases is far from smooth.

Halimi explained that “information is very limited due to the lack of cooperation from the Serbian authorities”.

“If there was cooperation from Serbia, then certainly the murderers, those who contributed, those who followed [Ivanovic] and so on, would have been found,” he said.

The murder trial continues on April 19.