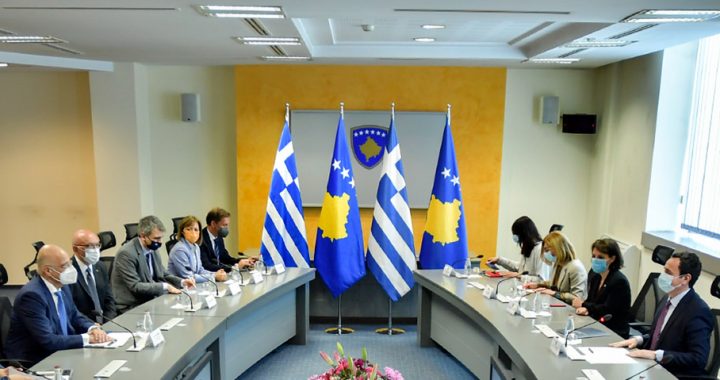 Frequent visits to Prishtina and Athens by Greek and Kosovo officials have left many wondering if recognition is on the horizon.

Interactions between Kosovo and Greece have become increasingly frequent in the first half of 2021. Prime Minister Albin Kurti’s visit to Greece last week, during which he was received in Athens by his Greek counterpart, Prime Minister Kyriakos Mitsotakis, came after a series of mutual visits between officials of the two countries. As part of his week-long stay Prime Minister Kurti met a long list of Greek officials, including the Minister of National Defence and leader of the opposition Alexis Tsipras.

This budding bilateral relationship has left room for many to wonder whether Greece is close to formally recognising Kosovo, which may come as something of a surprise considering the two countries do not exactly share a history of close diplomatic ties. In fact, Greece’s position has always been stuck in something of a status quo regarding Kosovo’s independence and its subsequent international recognition.

As an EU Member State, Greece has stated that it is open to recognising Kosovo only after the conclusion of the EU-brokered normalisation agreement with Serbia, which had created problems with moving forward in terms of forging partnerships and cooperation. A combination of Greece’s hesitation and Kosovo’s passive engagement and inert foreign policy have resulted in stagnant relations between the two states for a while.

However, things seemed to have changed for the better in June this year when Greek Foreign Minister Nikos Dendias visited Kosovo, his second visit in less than a year. During his visit he expressed his country’s readiness to assist Kosovo in the visa liberalisation process and cited the ICJ’s opinion on the independence of Kosovo, which was perceived as an indication of a possible impending recognition.

Following up on that, Kosovo’s Economic and Commercial Affairs Office in Athens has been upgraded to an Office of Interests, incorporating a political sphere on top of the economic cooperation that both countries have fostered over the years.

This increased amiability in relations triggered a reaction in Belgrade, with Serbian President Aleksandar Vucic saying that he was waiting to see if the new office would mean something more between Greece and Kosovo, but offered reassurances that the former would not recognise Kosovo. Meanwhile, the US Ambassador to Greece has praised Kosovo and Greece’s commitment to deepening relations.

Fears of secession by Northern Cyprus have naturally accompanied Greece’s refusal to recognise Kosovo’s independence, an argument invoked by many other countries, besides Greece. However, as Kosovo’s situation cannot be compared to other countries’ disputes, as it is a sui generis case in itself, as established by the European Council, this should not be an obstacle to future recognition.

In terms of financial cooperation and trade, both countries, being geographically close, have worked together towards development. For Greece, economic growth comes in parallel with stability, and its commitment to improving relations with Kosovo as well as striving for regional development and stability has been a continuous policy.

In fact, in the past Greece’s vote has made it possible for Kosovo to join the World Bank, the European Bank for Reconstruction and Development and other international economic institutions, including the International Monetary Fund and the Council of Europe Development Bank. Greece also currently participates both in EULEX and the KFOR NATO mission.

The Greek Liaison Office in Kosovo, which functions in lieu of an Embassy but at Ambassadorial level, also has the power to issue visas and this has made it easier for many Kosovars to visit Greece as a tourist destination. It has also eased the movement of students and investors and paved the way for broadening cultural ties.

While many non-recognizing countries have belligerently prevented admission for Kosovo citizens, Greece has facilitated it from the beginning. Essentially, at this point, Greece and Kosovo have cooperated in almost every area, with only Greece’s recognition of Kosovo left to be achieved to cement diplomatic ties.

According to Ioannis Armakolas from the Hellenic Foundation for European and Foreign Policy, Kosovo should continue creating bridges of cooperation between the two countries, while toning down the pressure for recognition.

Despite Armakolas’ warning though, it is easy to see the strong appeal to Kosovo of recognition by Greece. Besides being a strategic partner when it comes to improving the economy, Greece’s assistance could help Kosovo tremendously when it comes to integration into international organisations such as the EU and NATO. Greece, alongside Cyprus, is among the five EU and four NATO non-recognisers.

From a Greek point of view, recognition of Kosovo would be met with the approval of many Western countries, including Kosovo’s strong partners and allies, and would be considered a real contribution to its perspective on regional peace and prosperity.

In order to conclude the recent close cooperation and formalise bilateral ties, all that remains is for Greece to align itself in the ranks of those countries that have recognised Kosovo’s independence and established diplomatic ties. Until then, Kosovo should maintain its policy of close partnership and correspondence with Greece across the numerous areas of mutual interest.