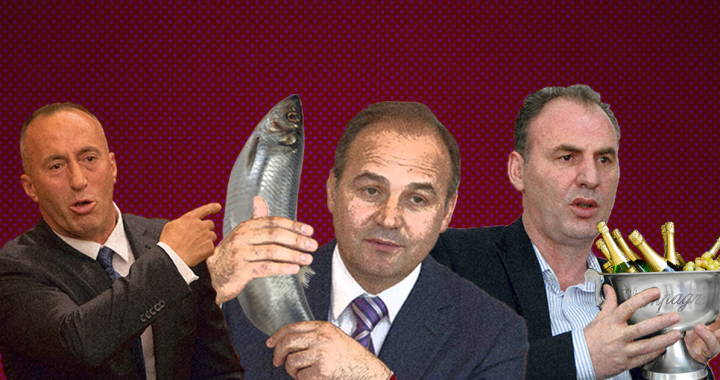 Documents appearing in the press show the Office of the Prime Minister paying hundreds of invoices for extravagant expenses during the outgoing government’s reign, with over 500,000 euros reported to have been spent on food and drink alone.

The lavish spending habits of high officials in the previous government have been in the spotlight in recent days after numerous invoices paid by the Office of the Prime Minister for exorbitant expenses appeared in the media.

According to reports in Koha Ditore, over 500,000 euros of public money was spent solely on extravagant meals in outgoing prime minister Ramush Haradinaj’s less than two-year tenure in office.

Responding to the allegations, Haradinaj protested his innocence. “Ramush Haradinaj has not spent one Kosovar cent on lunch for himself,” he told TV21. “I eat lunch in the office, a burek or something.”

However, while Haradinaj claims to exclusively enjoy humble pastries, BIRN has discovered numerous invoices filed by his office for far more indulgent food and drink.

Just a week after the coalition government was formed on September 9, 2017, Haradinaj appears to have been washing his burek down with champagne paid for by the public purse. Three 50 euro bottles of AR Lenoble champagne were purchased by the Office of the Prime Minister on September 16, 2017, while another nine were purchased on January 25, 2018, and a further four on March 9, 2018.

In its first six months of governance, the Office of the Prime Minister thus spent 800 euros of public money on champagne, more than twice the average monthly salary in the private sector in Kosovo, which stood at 361 euros net per month in 2018 according to the Kosovo Agency of Statistics.

Expensive drinks are a hallmark of many of the invoices seen and published by BIRN. At a single dinner on December 4, 2017, more than 500 euros were spent on wine at Tiffany’s restaurant in Prishtina. Another 175 euros had been spent on wine at the same restaurant just two weeks before, when diners also spent over 25 euros on ajvar alone. The total bill for the two visits came to over 2,000 euros.

Invoices filed at the office of the prime minister were often not itemised or accompanied by a receipt, with expenses over 1,000 and 2,000 euros simply attributed to “food and drink” or “food protocol.”

One of the largest invoices discovered by BIRN thus far was for a more than 2,800 euro bill that was racked up at Luani-AG, a wholesale shop in Peja. The bill included 50 bottles of wine, 19 bottles of vodka, 15 bottles of whisky and 10 bottles of Jagermeister, while the claim contains a handwritten note suggesting the purchase was made for the War Veterans Association in Peja.

Attention has also fallen on the spending habits of two of the four Deputy Prime Ministers serving in the outgoing government, Fatmir Limaj of NISMA and Enver Hoxhaj of the Democratic Party of Kosovo, PDK, whose expenses were covered by the Office of the Prime Minister.

Hoxhaj appears to have been reimbursed for luxurious meals paid for before he took his position as deputy prime minister.

Among the expenses paid by the Office of the Prime Minister on Hoxhaj’s behalf are two invoices dated September 4, 2017, five days before the formation of the coalition government at the Kosovo Assembly. Hoxhaj had served as the Minister for Foreign Affairs between 2014 and 2017, but resigned on August 2, 2017, after being elected an MP in June 2017’s parliamentary elections.

However, despite the fact that Hoxhaj was only an MP when ordering both lunch and dinner at the Emerald Hotel in Prishtina on September 4, 2017, his office submitted a request for payment of the invoice to the Office of the Prime Minister in November 2017, the invoice received and approved by Hoxhaj’s adviser Valon Berisha.

Speaking to BIRN, Hoxhaj first insisted he was still Minister of Foreign Affairs at the time, before later stating that he did not remember the dinner and that none of his staff signed the invoice. When BIRN presented the document showing the signature of Valon Berisha, Hoxhaj asked for a further day to investigate, but later provided no response.

Examination of the invoices submitted by Hoxhaj reveal numerous late night drinks and dinners charged to the public purse. On three occasions, receipts received around or after midnight were submitted for reimbursement, including a nearly 200 euro bill received at 1:40 a.m. from the Vela fish restaurant in Prishtina, where diners ate over a kilogram of fish.

Limaj meanwhile has come under particular scrutiny for his use of credit cards charged to the state budget. In the two years of the coalition government, the outgoing Deputy Prime Minister is reported to have spent over 24,000 euros on credit cards funded by the state, nearly 10,000 euros more than Ramush Haradinaj spent in the same period.

Earlier this year, Limaj’s son Durim, who worked as an adviser to NISMA’s Minister of Trade and Industry, Endrit Shala, also found himself in the spotlight after it emerged he had spent 30,000 euros of public money on trips abroad, including nearly 9,000 euros on food whilst away.

The invoices submitted by Fatmir Limaj’s office also reveal a taste for expensive lunches. More than 1,600 euros of the state budget was spent during 13 trips to N’Peshk, a fish restaurant in Prishtina, between October and December 2017. Limaj’s office also submitted perhaps the most brazen expenses claim discovered so far, invoicing the public for a pack of Marlboro cigarettes bought on a trip to Albania.