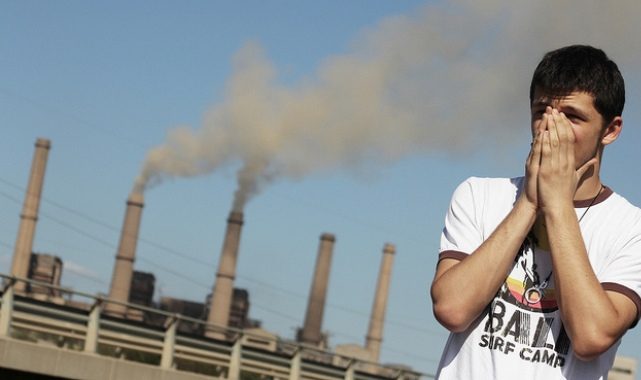 Kosovo’s poor air quality is worrisome, but has not received much attention or strategic thinking. We must begin to address this by making pollution a national security issue.

Only a few days ago, the UN Children’s Fund (UNICEF) published a new report revealing an alarming state of air pollution, especially for the world’s youth population. According to the report “Clear the Air for Children,” 2 billion children and youth are affected by air pollution. Out of this number, 1 in 7 children around the world, about 300 million, are critically endangered by air pollution. These numbers exceed international standards on pollution by six times.

A few years ago, the World Bank found that Kosovars spend millions of euros every year in health costs, despite that the Bank endorsed the government’s plan to build a new coal power plant, a project which now is justifiably stalling.

Nevertheless, air pollution is a well-known problem, but in the past, actors from the public or civil society have failed to inform and keep the public at large updated on the stats. Moreover, and controversially so, in recent months public agencies responsible for the monitoring of air pollution claim that air quality in Kosovo is within EU standards!

Official data are rarely made public, but data gathered by the Prosperity Initiative in Kosovo (PIKS) and their partners within the Science for Change Kosovo (SfCK) Project, who have monitored air quality, specifically the levels of Nitrogen Dioxide (NO2) in the air, in most vulnerable municipalities for half a year, claim that the situation is still alarming, especially in the capital Prishtina where several hotspots have been identified where values exceed EU Standards two- to threefold.

On Earth Day 2016, together with other partners of the project, PIKS and SfCK organized a festival called the “Science for Change Festival: Change is in the Air!” where they presented their findings. Hardly any media covered the event.

The SfCK Project initiated by the UNICEF the Innovations Lab Kosovo started its monitoring project in 2014, and was later continued by PIKS. At times, public authorities reference our data due to the lack of their own. Later this month, PIKS is planning to publish a report with findings on the State of Air Pollution in Kosovo for the period of November 2015 – June 2016. The report provides only a partial reflection of the quality of air in the country and definitely does not depict the entire story, but despite that, it identifies several locations or hotspots where poor air quality exceeds EU and World Health Organization standards. One instance of this is in the capital Prishtina, at the intersection by Hotel Grand, between the Garibaldi and George Bush street, which could be one of the most polluted streets in the wider region, with values found to exceed standards by two-to-three times.

The data shows that by and large the situation in several municipalities is exacerbated during late Autumn and Winter, when in addition to the coal power plants, and the traffic, households also start to contribute to the air pollution by burning wood and coal for heating purposes.

But even if this report would not affirm the dire state of things, people walking, jogging, biking on the streets of Prishtina, Obiliq, Graboc, et cetera wouldn’t have a hard time telling you how bad it feels and how bad the air is.

In Europe, it is the Balkans in particular that is most affected by pollution. The countries in the region happen to house seven of the ten most polluting coal power plants in the entire continent. All of them have common problems: energy needs largely stilled by fossil fuel, a lack of regular studies and monitoring, the difficulty of accessing data provided by authorities, and most unfortunately, the apparent lack of systematic strategies to tackle the problem of air pollution. The last one is highly important, because a strategy which would serve as an urgent response to the problem is direly needed.

It’s 2016 and the world has never moved this fast –  the age of information is in full gear. We are consumed by an ecosystem of interruption technologies, partially attentive to everything. We live in a 140 character Twitter reality, ever eroding attention spans streamed by flashy and viral headlines and facebook posts.  The media discourse is disappointing: low-hazard public issues gain visibility and in turn arouse a public reaction, while high-hazard issues, such as air pollution, fail to generate the needed media buzz which could stir up public sentiment to tackle the alarming situation.

So then, in an age of fractured attention spans and short term policy-making, how do we effectively address the science and politics of long-term damage? We’ve known now for far too long that pressing environmental problems such as air pollution are killing us slowly and discretely. So how do we render visible the slow and invisible moving things that rarely if any make the news?

The writer Rob Nixon in his book Slow Violence and the Environmentalism of the Poor asks important questions worth urgent answers from different links of society. For instance, how can we raise the profile of these events that are killing us slowly? How can we effectively deconstruct environmental time and show how it impacts society? Can democracy actually solve this problem, noting the four-year cycle which pushes politicians to focus on popular themes and problems rather than long-term environmental damage which they feel are unable to address within their term and so comfortably postpone for someone else to address in the future? How do we stimulate public discussion and warrant political intervention? Nixon suggests that we need to shift the paradigm of how we perceive speed in order to make environmental violence visible. We need to redefine what violence is, and ultimately, we need to re define our way of life and our worldview.

In the Balkans, such gestures in slowness are even harder. Media are more interested in feeding people with showbiz news, political nonsense, and do not care much about environmental injustice and its long term adverse effects.

In the past, Balkan states have defined their national security in terms of protecting their borders and their people from each other. What would happen if in line with Wangari Maathai, we would advocate to include environmental challenges as matters of national security?

Maathai insisted that environmental issues should be considered as threats to national integrity. Air pollution should be seen “as a form of slow violence” that threatens the viability of the nation. This is not the silver bullet solution to this problem, but it’s an idea worth considering, and we need ideas now more than ever!