Activist who took on the World Bank feels vindicated

Dajana Berisha who filed the complaint on behalf of victims of forced displacement for the development of Kosovo’s coal-fueled power plant, talks about getting the World Bank to recognize their mistakes.

Dajana Berisha, an activist who filed the complaint on behalf of victims of forced displacement for the development of Kosovo’s coal-fueled power plant, talks about getting the World Bank to recognize their mistakes.

Dajana Berisha met the Hade and Shale/Shkabaj residents in 2013 during a protest against the resettlement caused by the World Bank-funded project to construct a new coal-fuelled power plant. Quickly after, Berisha, who leads the Forum for Civic Initiative, became their representative and convinced them to submit a complaint to the World Bank Inspection Panel.

In the complaint, Berisha argued that villagers suffered “a loss of land, livelihoods and wellbeing as a result of the bank’s non-compliance with its own policies in its technical assistance to prepare a framework designed to forcefully resettle us to make way for a Bank financed new coal power plant.”

In September, the World Bank Inspection Panel found the complaint valid and assessed that the involuntary resettlement of over a thousand inhabitants was not in compliance with operational procedures. The summary of the internal report has just been made public.

In light of this victory, Jeta Xharra from Prishtina Insight sat down to talk to Berisha.

Prishtina Insight: So how does it feel for the Inspection Panel to decide a case in your favor against the World Bank?

Dajana Berisha: We hit big! The Panel’s decision is a victory in so many levels. It proved that in spite of its leading advisory role in the energy sector the World Bank failed to guide the Government of Kosovo properly into designing a comprehensive resettlement plan incorporating a development component and restoration of livelihood of displaced people.

It proved that the World Bank failed to monitor the implementation of the resettlement policy framework in compliance with its own operational procedures OP 12.

On the other side, sadly, the Panel’s report documented major harm caused to the residents of Old Hade expelled from their properties in 2004, the ones currently residing in Old Hade hoping to be resettled and the ones already resettled in Shkabaj. Finally, the Bank’s management fails to admit its own failures and it leaving the major blame to the Government of Kosovo. 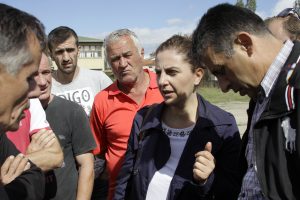 PI: Why did you and your organization, Forum for Civic Initiative, decide to get involved and submit the complaint on behalf of villagers of Hade and Shale?

Berisha: Well, how do you handle the grim news about unjust, corruption, poverty, inequality, institutional arrogance, forced displacement performed on people that fought for the country’s liberation, fought for their rights to get actively involved in the making of Kosova? You can tune out, just ignore and go one with your daily chores pretending like one day, maybe one day “the superhuman” will come and clean up this big mess called “the development path” for Kosova.

But instead, I chose to listen with compassion to the revolt of many families, individuals, former soldiers of the KLA, mine workers, farmers, women, men and children unable to make sense of the harsh reality in which they were trapped in post-war Kosovo. And in the process of listening, understanding, informing and protesting next to them against all the injustice done on behalf of “economic development” I gained their undisputed trust and together we confronted the Government of Kosova, the World Bank officials, KEK [Kosovo Energy Corporation]  and the Municipality of Obiliq.

For the last two years we had so many intensive meetings with institutional and World Bank representatives, we did so many street protests for their cause, and finally, I proposed that the community undertake one of the strongest actions that would get the local and international institution’s attention – since the protests didn’t get us anywhere. I recommended that they consider the option to file a complaint against the World Bank’s bodies that measure the non-compliance of the Bank with its own operational standards called OP14 with regard to the involuntary resettlement.

And the entire community of Old Hade and Shalë/Shkabaj unanimously appointed me as their official representative responsible for writing and submitting the complaint to the Inspection panel of the World Bank. Two teams of professional investigators from Washington DC visited Old Hade and Shkabaj to investigate the case of involuntary resettlement of Hade. 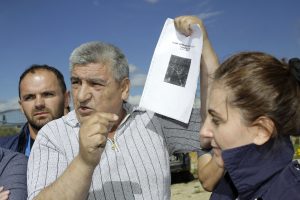 I was happy because I was able to set a model for those citizens, a model of honest and loyal cooperation, a model of hardworking, persistency and goal focused civil society, a model that they had never before experienced.

Of course, this is an emotional journey for me as well. Tears were shed listening to these stories of people who were fighters and refugees during the war, lost their limbs to the war, and were now losing their lungs in peacetime.

I became angry about this and I wanted to be part of changing this narrative of a postwar reality in Kosova.

PI: What was the biggest challenge in this battle?

Berisha: During the process I realized that these people were smart and strong and willing to go very far to get their rights set straight, but they lacked information about their rights, felt intimidated by the arrogance of officials, and the World Bank who would visit the displaced villages occasionally.

The challenge was to watch the traumatized, angry, betrayed, economically impoverished communities next to these ‘visiting delegations.’ Traumatized because of the gravity of the situation and the length of a decade-long process. Angry because their lives are in limbo and they felt unable to change anything. Economically impoverished because of unemployment, and because their agriculture lands were taken by KEK leaving them with the burden of spending money they don’t have in in purchasing everyday items they used to produce.

PI: Do you remember how did you first hear of, or got acquainted with the villagers of Hade?

Berisha: Three years ago, in march 2013 I received a phone call from one of our local partners inviting me to a protest in Hade. Citizens had announced a local protest near where I lived, in front of KEK. It was pouring with rain, and I felt like: how were they going to protest in this kind of weather – who’s going to listen to them?

Anyhow, I took my umbrella and off I drove to Hade where around 100 men who were soaking wet were loudly discussing the itinerary of their protest and waiting for the media to appear. 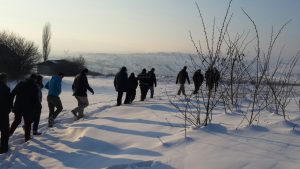 The first thing I noticed while getting off the car was that I was the only woman there. I approached the angry group slowly and in a very polite manner I introduced myself and with softly, but decisively I told them: ‘I want to listen to your story.’

The protest was basically a march from the school to the KEK vicinity. Walking in the rain, I listened to Ragip’s story of how they were manipulated and convinced by the government, the World Bank, KEK, and the Municipality of Obiliq into giving their agricultural land for KEK’s use to expand the coal mine and open pit for a new coal power plant the so called “Kosova e Re.”

In that walk and so many others we took throughout the three years we’ve worked together, other men told me their stories, while keeping me steady in the wet mud mixed with coal ash.

They all told me how they were force moved out of their houses in 2004 by local police forces and UNMIK; how KEK changed its mining direction affecting their safety and security when Obiliq was defined a zone of the national economic interest; how half of the village was destroyed and people were scattered in other municipalities; how they had no health services; no electricity; not being allowed to build anything and yet not able to move out of that village. I understood that they were trapped in a brutal reality and everybody else involved had continued manipulating them.

PI: What was World Bank’s responsibility in how they were treated?

Berisha: The WB was aware of the harms caused to the citizens of Hade by wrong displacement and has failed to address them.. The Bank was responsible to ensure that the implementation of the resettlement policy framework was in compliance with its own standards. Those rules and standards are put there from the Bank Board and the Bank’s Management failed to respect those rules.

PI: So what precedent does this victory with the Inspection Panel report set for you locally and regionally?

Berisha: We internationalized the issue of Hade and that meant a great deal for my community.

On a national level we are now being recognized as strong, professional and powerful actors in a position to bring good changes in cooperation with a community.

At a regional level, this case may quite well serve as the model of a meaningful work of a grassroot organization in empowering citizens to demand justice, transparency and hold any government, or international investment institution accountable for wrongdoing. This is one of the best examples of the use of a triangle approach in addressing fundamental human rights, economic development perspectives seen from the ordinary citizens, analyzed by think tanks and researched by investigative journalism of Kosovo.

by Bronwyn Jones
Next: Opinion