In search of perfect harmony

In Kosovo, the religiously diverse choir of the Kosovo Philharmonic regularly perform both religious and secular music. Neither its members nor the people around them have ever considered their harmonious performance, both musically and interpersonally, a novelty.

A single piano twang precedes a plurality of voices of members of the Kosovo Philharmonic Choir, who are rehearsing for their upcoming concert. Every three to five seconds as the words sung in old Latin end, the choir leader explains the meaning and explains what exactly is required in order to achieve the perfection he seeks.

An old door leading to the rehearsal room and a polished piano in the middle of the corridor destroys the magic one feels while listening to the music they are creating in the Yugoslav minimalist building.

Kosovo institutions do not seem to take much interest in their activities, maybe because of its nature. It takes specific knowledge to be a musician, after all. Perhaps that is why the Kosovo Philharmonic looks like an oasis of culture, untouched from political interference, devoid of micro-management of daily politics. 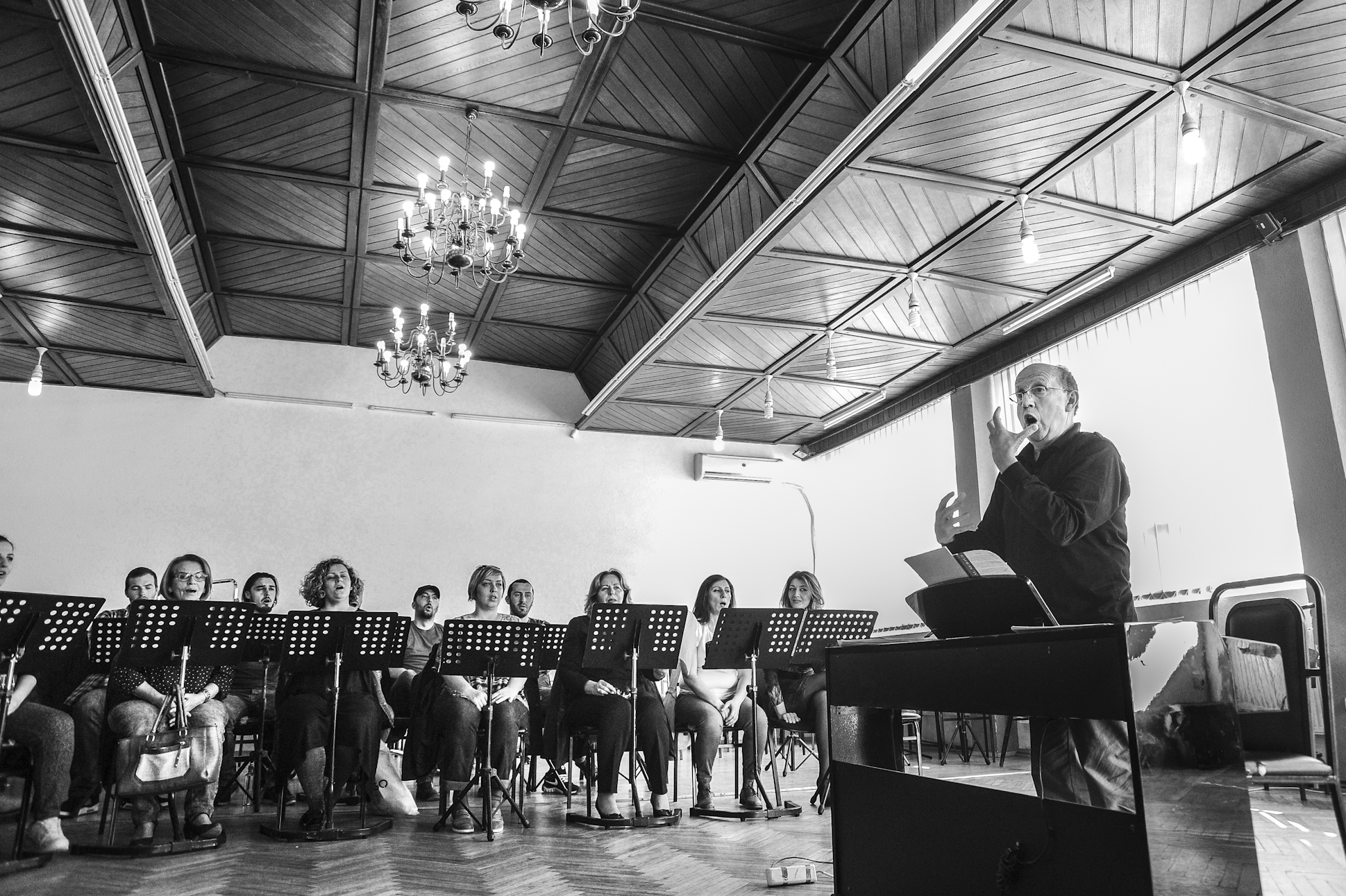 Although it might be apolitical, the orchestra and the choir both require a lot of investment in order to maintain their qualitative performances. A recent Japanese donation helped.

Established right after the war between Kosovo and Serbia, the Kosovo Philharmonic gave its first concert in September 2000. It was rebuilt after a decade of apartheid and war: in the 1990s Kosovo Albanians were fired from all their jobs and public institutions. This included the all public institutions, even cultural ones such as the Academy of Arts as well as orchestras and choirs.

“The first concert had only 13 instrumentalists, those who were still in Kosovo after the conflict,” recounts Dardan Selimaj, the manager of the orchestra and choir. 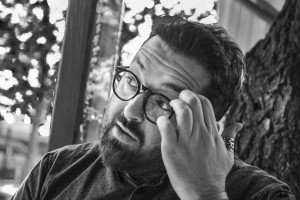 “There’s a lot to do, but if we refer to the professional level of the orchestras in the region, one can say that the Kosovo Philharmonic is competitive,” says Selimaj, who has been managing the Philharmonic for the past three years.

When asked about the religious makeup of the orchestra and choir members, he smiles, confused. He explains that he never thought about that until 2011. Like Kosovo itself, the choir which often performs for services at the Mother Teresa Cathedral in Prishtina’s center is religiously mixed. Kosovo’s population is predominantly Muslim, albeit non-traditional and non-practicing, while the rest of the population is either Catholic or Serb Orthodox.

“The first time I thought about this was when a guest conductor asked me,” says Selimaj. “It never occurred to me before.”

While a lot of money is spent on ‘interfaith’ orchestras or choirs, the Kosovo Philharmonic is an organically formed group of instrumentalists and choir members who face financial difficulties on a daily basis.

“It is trendy out there to create orchestras that are religiously diverse, and a lot of money is invested in them,” says Selimaj acerbically, taking a sip of espresso. Yet he is not contemplating a funding application that would require parading the religious diversity of the Kosovo Philharmonic as a novelty.  He considers the range of people in his crew a normal thing among Kosovo people, and he wants it to remain so. 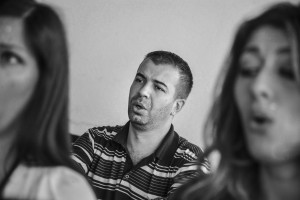 Nikoll Gjin, a bass singer member of the choir.

Nikoll Gjini, a well-built man with a deep voice, is one of the choir members. A bass singer, he’s Catholic, but says that his faith has never come up during his time at the Kosovo Philharmonic. Furthermore, he recounts singing ilahi, songs dedicated to Allah and the deeds of his messenger Mohamed for the Eid holiday,  together with his Muslim friends.

Perpetually smiling, he often looks as if he has been caught off guard. This happens mostly because the questions make him ponder differences that never occurred to him.

“For me it was an interesting and special feeling when I sang  an ilahi for Eid, since I am used to only classical, sacral music,” says Gjini.

When asked if he has  ever had any problems being a Catholic in Kosovo he answers,  “Wallah, I never had any problems.” Wallah is a very common expression in Kosovo which originally stems from the Arabic waheyat Allah, meaning ‘I swear to God.’ Like most people in Kosovo, Gjini deploys it for emphatic purposes, stripping it of its religious undertones.

Gjini comes from a family of musicians; his uncle was a composer and his mother a singer. He is also a member of a small choral group called “Okteti Plus” and he is looking forward to performing choral songs from different religions in an upcoming concert.

Adelina Paloja, a soprano singer with the choir.

Gjini’s friend and colleague Adelina Paloja, a Muslim woman and a soprano singer,  also says that religion never played into her profession, although  she started her musical education singing masses composed by classical composers.

Paloja was raised Muslim but she has sung in various churches and performed pieces with Christian motifs. This has never been an issue for her or her family, she says.

Her sister, a devout Muslim, fasts during Ramadan, yet never fails to attend her sister’s concerts. She does not find this unusual, in fact quite to the contrary.

“My family members are regulars in our concerts. When we go to a church or to a mosque,  my family and I see it as a house of God, they are all equally good,” says Paloja calmly, emphasizing that religious tolerance is prevalent in Kosovo. Although some schools of conservative Islam finds most types of music as haram, or sinful, Paloja was raised in an environment full of music. Her father was an amateur guitarist in a local band. He loved music and he sent his children to the music school in Prishtina, but only Adelina had the ear and voice to become a singer. 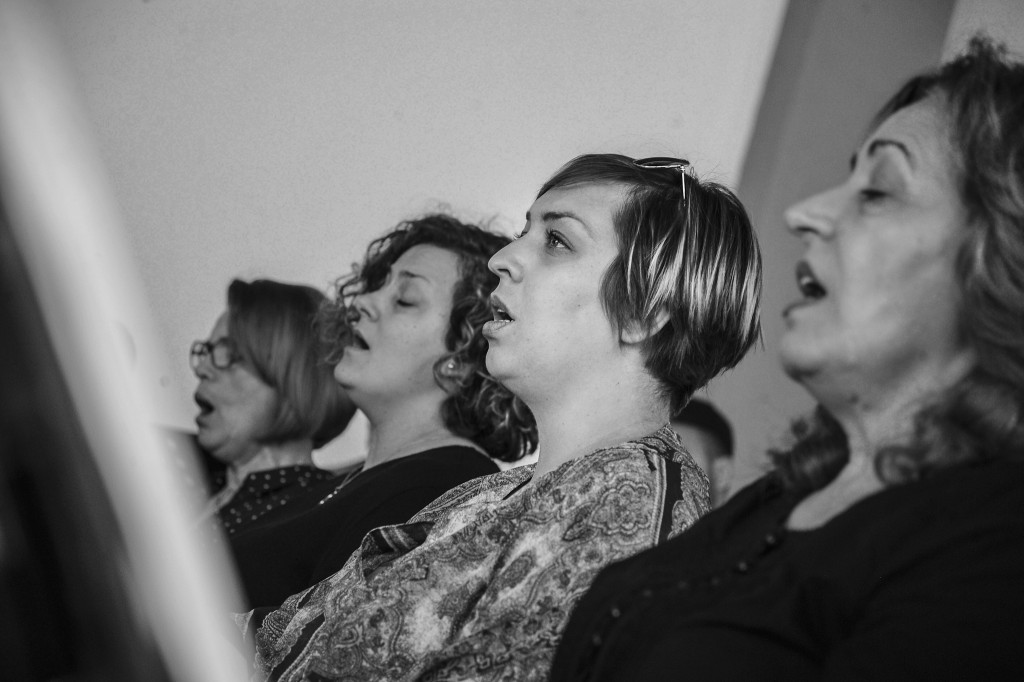 The choir of the Kosovo Philharmonic practicing in their quarters in the center of Prishtina.

I sit in the back and listen to the choir as it practices, the unified and harmonious voices reinforcing each other, echoing against the room’s empty walls.

Their voices, like much of their stances, echo in harmony, whether they are performing for the religious holidays of Muslims or Catholics.  It occurs to me that Gjini and Paloja represent something quintessential about the philharmonic. The word philharmonic itself stems from the Greek word “philia” (φιλία) and “harmonia” (ἁρμονία) which means “love for harmony.”