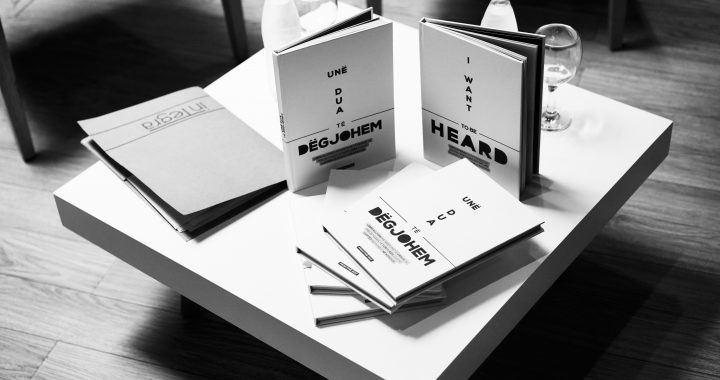 In their own voices

Ten survivors of sexual violence tell their stories, revealing truths about Kosovo society and how the NATO war affected civilians on the ground.

With the publication of I Want to be Heard, a collection of oral history interviews, ten Albanian women survivors of sexual violence during the 1998-1999 Kosovo war have finally broken their silence. The speakers have much in common, as they represent a specific group: they all belong to rural communities, a world still dominated by traditionalism at the time of their coming of age, and later, during the war, violently targeted by Milosevic’s counter-insurgency. While they generously reveal intimate details of individual lives, they also provide a broader narrative that we, the readers, have an obligation to pay attention to.

The first thing these women’s narratives shatter is the myth of the good life in the villages, based on tradition and untouched by the ills of Yugoslav civilization. Extreme poverty was ubiquitous. When Hena says, “I have no good memory of my childhood,” she is using very strong language.  She is not alone.

H.M.’s memories are heartbreaking. “There were days when my mother managed to make bread. Mama would not eat.  She would start crying. I was the oldest of the children. I would see mama cry and say, ‘I don’t want to eat either.’”

All the women talk about being pulled out of school as their first trauma. This is when they realized that, as women, they were not as valued as men. They saw their brothers go to school, while they were used as extra hands in the fields or at home.  Puberty brought the second realization: they had to produce children, preferably boys. For E.T., who was married at 12 to a man who was 40 years old, the age of her father, even early schooling was not possible. Hena was forced to forget the boy she loved and was engaged to someone who revealed himself to be an abusive loser: “He was not a man, he would spend the day with women, he was not a man, he was a monkey, poor, did not have what to eat.” When she finally left him, after bearing two children, her family married her off again, at 27, to a 50-year-old widower with six children. Fortunately, this second husband turned out to be a good man, who cared about her. Merita had no such luck, and was stuck in a marriage to an alcoholic unable to provide for his own family.

These narratives suggest the revision of another myth, that of the 1999 NATO intervention as an unmitigated success. In fact, as NATO pursued an exclusively aerial bombing campaign with a zero casualty policy, Serbian security forces cowardly attacked civilians everywhere, but with special brutality in the rural areas. The rapes had begun much earlier, and Hena was assaulted in 1992 when she went to the hospital to give birth to her son.  But when the NATO war started, deportation, mass killing and rape became widespread. Serbian police and paramilitaries detained women, burned their skin with cigarettes, cut their bodies, drugged them, and gang-raped them.

Teuta knew what would happen to women since she had watched the Bosnian war live on Swiss TV. What nobody knew, but soon discovered, was that the war would be much worse for civilians after the NATO intervention. Merita remembers, “On March 24, we were happy, we thought it would get better. NATO came and the war would end and it would get better, instead a bigger war began.”

NATO left the civilians at the mercy of a machinery or death and destruction. The Serbian police and paramilitaries raped out of opportunism, as the police in the case of Th.M., who was grabbed in a cafe, or Merita, assaulted in a barn, as they were fetching food for their families.  Or they raped according to a plan to destroy families and communities, as in most cases, when they locked their victims in rape camps and tortured them.

No one defended these women. NATO had no ground presence. These survivors say that the Serbian regular army did not assault them, but neither they did anything to stop the violence. Male family members could not help. When present, they were either killed or detained, like Lola’s husband. When detained, they were raped themselves.

We learn from these stories that a blanket condemnation of the families for not helping the survivors would be wrong. There is no pattern here. Some people cannot escape the same traditionalism that oppressed women before the war. But most are crushed by events, and often have no way to cope.  When Lola’s brother wanted to leave his wife, his mother confronted him. She first reminded him that his sister was raped, then that he too was raped in detention, finally, “‘Let me tell you something else!’ He said, ‘What?’ She said, ‘I will never tell you as long as I live.’ At that moment my brother understood that his mom too was raped. And he cried, he got up and took us in his arms.”

Almost all the survivors attempted suicide, but were saved by loving members of their families. Surprisingly, in a couple of cases it was the father-in-law who was the most understanding. Two very supportive husbands tell their own stories in the book. But in another case, the husband came back home after three years and raped his wife to punish her.

Outside the family it has been worse. Gossip and the ridicule of a petty, closed society awaited survivors. They are civilian victims of the war, but have been ignored in the commemorations of war and by the institutions, until President Atifete Jahjaga gave impetus to a series of initiatives, such as a law providing a pension to survivors, and the 2015 art installation “Thinking of You,” by Alketa Xhafa Mripa. The monument Heroinat has been erected in the center of Pristina.

Yet, since the war only women’s rights groups provided survivors of rape  with care and allowed them to speak up, at least among themselves. Now they are talking to us all as well. What they communicate is their extraordinary will to live, not just survive. They seek medical care, but resist the mere medicalization of their condition. While slowly recovering from a serious post-traumatic stress disorder, H.H. was bothered by people who said that she was sick, because she did not think she was. Survivors pray to God, but do not believe that what happened to them was God’s will. As Lola says, “God gave me life, Serbs took it from me.”

They have a great desire to tell the world what they suffered and be believed. Recognition is the only form of justice they might have.

Anna Di Lellio is a professor of politics at New York University and The New School for Public Engagement. She is co-founder and academic adviser of the Kosovo Oral History Initiative.