Turkey’s huge ethnic Albanian community is increasingly melting into the mainstream and losing its identity – but some are resisting the trend.

In the music video for Shyhrete Behluli’s 2020 bilingual pop ballad “Jam Shqiptar/Ben Arnavutum” (“I’m Albanian”), Turkish pop star Sinan Akçil sits at a monument composed of Albanian, Bosniak, and Turkish national symbols in the Istanbul neighborhood of Bayrampaşa. There, at the centre of the Albanian community in Turkey, Akçil laments a condition that is common to the younger generation of Turks of Albanian heritage: “I’m Albanian but I can’t speak Albanian [the language] is in my heart but not on my tongue.”

The song speaks to the strong cultural identity of many Turkish-born Albanians, while Behluli’s Albanian lyrics recall the 20th century’s three waves of Albanian migrations to Turkey, which splintered many families.

For decades, Albanians in Turkey, as well as other non-Turkish communities, were compelled in public to sublimate their identity into a homogeneous Turkishness. But over the last 20 years a number of factors have led to an increase in the embrace and celebration of Albanian heritage in Turkey, as well as concerted efforts to reconnect with the culture, language and lands that their migrant forebearers left behind 50 to 110 years ago. 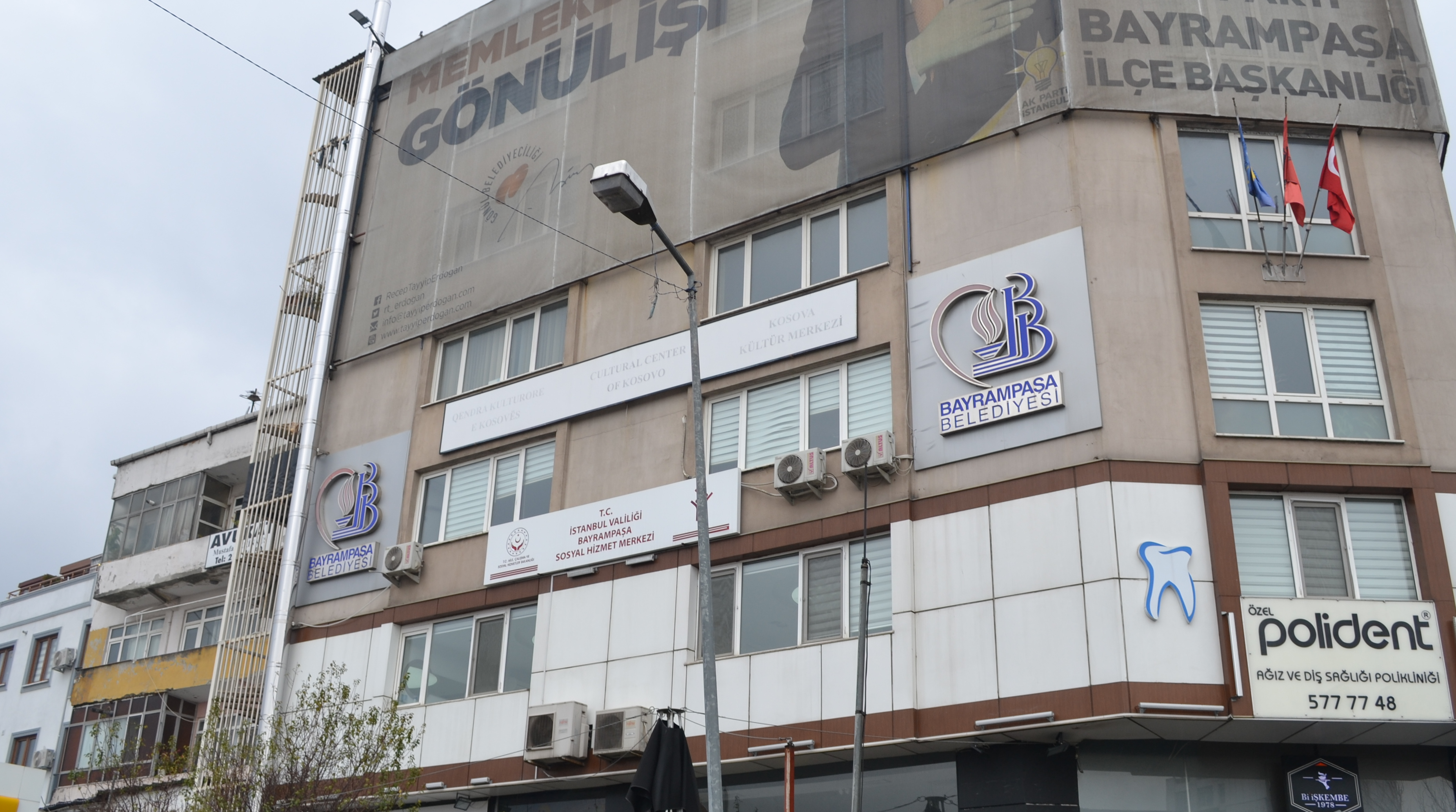 One result of this trend was the opening in Bayrampaşa in 2013 of the Kosovo Ministry of Diaspora’s first Cultural Centre, which works to increase cultural contact between Kosovo and Turkey and promote Kosovar and Albanian culture.

If Akçil wants to learn Albanian, he would be more than welcome to join the free nightly classes offered by Kamil Bitiş, the centre’s passionate director and sole employee. The classes reflect a small but growing interest in Albanian language instruction in Istanbul. Classes have long been offered at a number of Albanian cultural associations and for the last five years at Yildiz Technical University as well.

According to Bitiş, who since the early 1990s has been involved in Albanian activism in Turkey, interest in Albanian language classes grew after the 1999 independence war in Kosovo. Though Turkey’s Albanians paid close attention to their ancestral home in former Yugoslavia throughout the 1990s, the violence and unstable conditions prevented most from visiting, making the Albanian language of limited practical use. “But after the war, people started to visit Kosovo more often,” said Bitiş, and communicating with relatives required reinvesting in Albanian language skills.

Practically all of Bitiş’s students are of at least partial Albanian heritage, but as he told BIRN shortly before the COVID pandemic, “we have every age and language ability in our classes. For example, in last night’s class we had an elementary school student and a 77-year-old retired dentist who was born in Tetovo [in North Macedonia]. We have 17-year-olds and 73-year-olds – people of every age.”

Ceren Çelik has been one of the centre’s few students with no Albanian heritage. Originally from Antalya, in the south of Turkey, she was studying in Istanbul while preparing to join her parents and brother in Kosovo, where they had moved some years earlier to open a jewelry business.

Now with her customers and friends in the Kosovo towns of Suhareka and Prizren she speaks Albanian with aplomb, but when she started classes, “I didn’t know a single thing about Kosovo or Albanian,” she said, and was initially confused by her classmates. 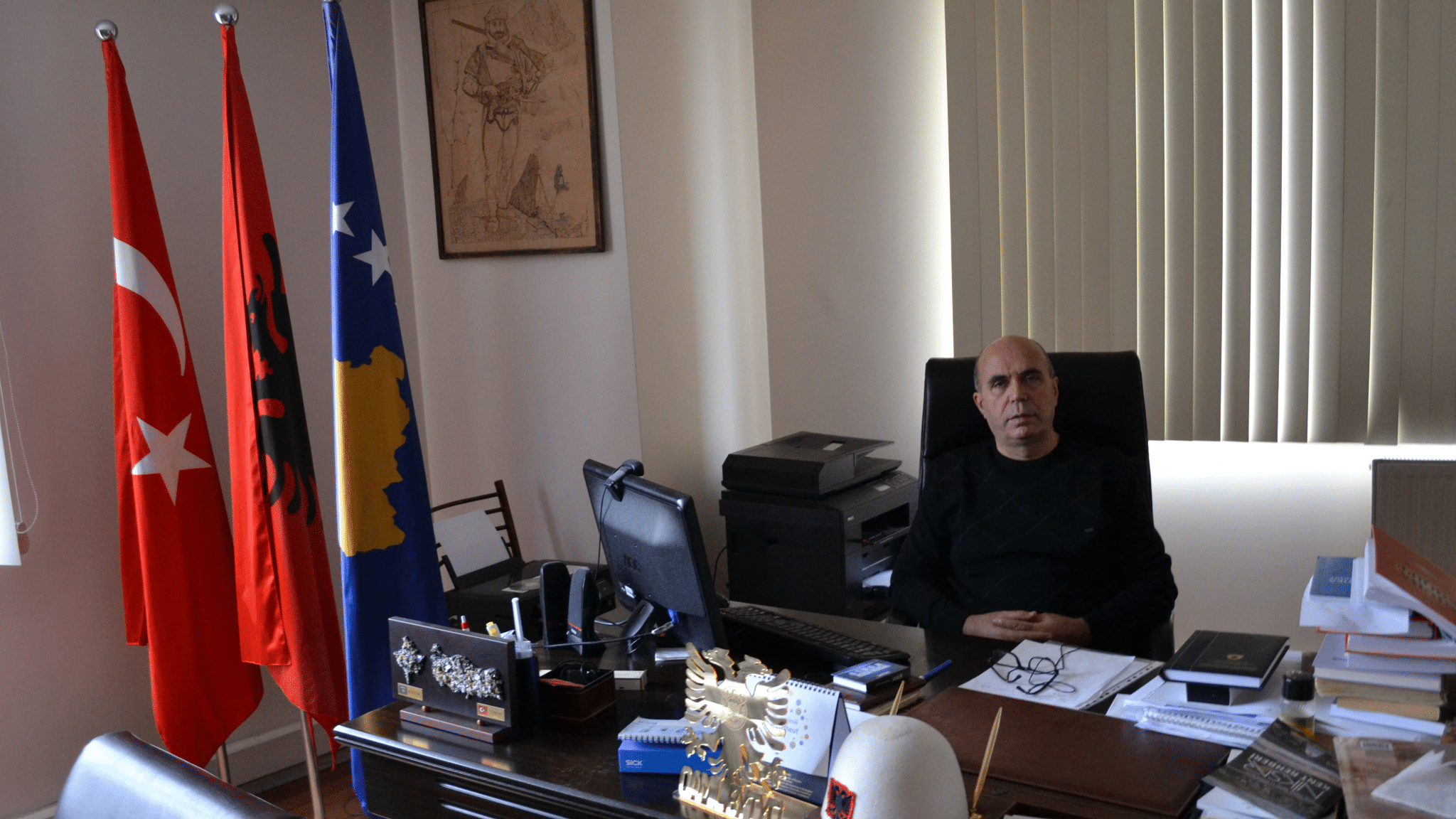 “They are all just like Turks, they were born in Turkey, but actually they are all Albanian,” Çelik said, describing her classmates. “I’m sure they even love [the Turkish republic’s founder] Ataturk more than I do, but they feel Albanian and love to visit their family in Kosovo and Macedonia and know so much about their history.”

Like Çelik, most younger students are learning Albanian for the first time, but language abilities in Bitiş’s classes run the gamut. Many are like the retired dentist, who moved to Turkey from Tetovo as a youngster. He speaks Albanian fluently, but uses a regional dialect of his parents’ generation, and wants to practice standard Albanian. “Some students know Albanian but their vocabulary is very small,” said Bitiş. “Maybe they spoke Albanian as children but now only know 500 words, or only know words related to food or religion. Sometimes they know Albanian well, but it is full of Macedonian and Serbian terms.”

Part of the need for Albanian language courses comes from the fact that many of those born in Albanian-speaking lands are quickly passing away. “For the older students, as time goes on and the friends they came to Turkey together with pass away, their Albanian abilities decrease,” said Bitiş. Increasingly, the younger generations have no one in their family to use the language with.

It was this trend that motivated a group of Albanians in the Istanbul neighborhood of Merdivenköy to start a new Albanian cultural association three years ago.

As one Turkish-born Albanian man at the association said: “We spoke [Albanian] with our parents but there was no other need or opportunity to develop our language further. But we made a mistake by not speaking it with our children.”

Almost every Albanian in Merdivenköy traces their roots to the Kosovo town of Kacanik and its surrounding villages. Their families came to Turkey in the 1930s and late-1950s. When Albanians migrated to Turkey, many reconstituted villages or extended family networks in the metropolis. Just as Merdivenköy Albanians are almost entirely Kacanikli, Albanians from Skopje are concentrated in Bayrampaşa, while Albanians living in the Istanbul neighbourhood of Küçükçekmece are disproportionately from Peja in Kosovo and Kumanovo in North Macedonia.

Whereas in the past an entire Istanbul street might be composed of Albanians from a single village, changing urban dynamics, assimilation, marriage with non-Albanians, and the passing on of the older generation has put an end to these dense, Albanian-language spaces. Instead, Albanians are creating a new space through activities and language classes at cultural associations.

The Merdivenköy association’s president, Ziya Şenkardeş, says: “We have a student group that consists of people from the young generation all the way up to 65-year-olds. It is great for the 65-year-olds to come and learn but we open classes especially so younger people can learn.”

To teach the classes, they hired Kremtim Krasniqi, an acting instructor and actor from Kosovo and an Istanbul resident of several years. Though the job wasn’t related to his normal profession, Krasniqi agreed to work with the association “because I saw how badly these people wanted to develop their Albanian and to stay connected to Kosovo,” he said.

As one man at the association told BIRN: “We feel like Albanians who just happen to be Turkish citizens. Our relatives are in Kosovo, our hearts, our souls are there, we are here [in Turkey] only in body.”

Waves of emigration dating back centuries

The Istanbul neighbourhood of Arnautköy (“Albanian Village” in Turkish) gained its name as early as the 15th century, one of many indicators that Albanians have been in Anatolia for centuries. During that time they played a crucial role in the Ottoman Empire and some of the most significant Ottoman historical figures had Albanian backgrounds.

Many Albanians also played central roles in the creation of the modern Turkish republic. The author of Turkey’s national anthem was the son of an Albanian from the Peja region of Kosovo. Albanian and Turkish national histories share some intellectuals, like Sami Frasheri.

Born in southern Albania, Frasheri was an Ottoman Albanian intellectual who spent much of his life in Istanbul, dying there in 1904. For Albanians, he is the leading intellectual of the Albanian National Revival of the late 19th century, while for Turks, who know him as Şemseddin Sami, he was an early and significant activist for Turkish language reforms.

Albanians assert there are at least 5 million ethnic Albanians in Turkey. Though the number of Turks with Albanian heritage is likely larger, the number for whom an Albanian identity plays a meaningful role in their lives is far smaller.

The family history of the Kosovo Cultural Centre’s director, Kamil Bitiş, is emblematic of these historical waves of migration.

Bitiş was born in 1959 as Kamil Bytyqi in the village of Sllovi in the Lipjan district of Kosovo and came to Turkey in 1964 aged five when his grandfather moved 16 members of the family to Istanbul.

When they left Kosovo and Yugoslavia, which they assumed they’d never see again, Serbian officials – Kosovo was then a province of Serbia – registered their surname as Bitiç. On arrival in Turkey they were compelled to Turkify their name.

Out of gratitude for being granted refuge, many new Albanian arrivals chose symbolically Turkish last names with no connection to their Albanian ones, such as “Öztürk,” meaning “core Turk.” But Bitiş’s grandfather wanted a Turkish surname that reminded the family of their Albanian past, so Bytyqi became Bitiş.

“When we came my grandfather asked where the Albanians live,” said Bitiş. “They were here in Bayrampaşa, so that’s where we settled down and we’ve been here 55 years.” Within a few years of arriving, dozens of members of the extended family were living near each other in Bayrampaşa.

Bitiş quickly picked up Turkish in the streets and in school, but in his environment many only used Albanian. “In the past all of our neighbours were Albanian, all of our family was together,” said Bitiş, “so for example today my mother, who is in her mid-80s, still can’t speak Turkish well.”

Bitiş’s father, like many Albanian men, found work in construction, where he worked alongside Bosniaks, Torbeş, Gorani, and Balkan ethnic Turks who had migrated to Turkey at the same time as the Albanians.

What brought so many Albanians and Balkan Muslims to Turkey across the years? For Bitiş’s family, the goal was to escape Serbian oppression. Bitiş’s grandfather had seen his father and uncle killed by the Serbian military in 1912, when Serbia seized Kosovo from the failing Ottoman Empire.

He then fled to Turkey in the 1920s to avoid military conscription in the Yugoslav army, but returned to Kosovo after a couple years. In the anti-Albanian environment of Yugoslavia following the Second World War, Bitiş’s grandfather had a sense of foreboding. “My grandfather and father were afraid about what would come, whether there would be another massacre by the Serbs. In fear, we came here to Turkey,” said Bitiş. 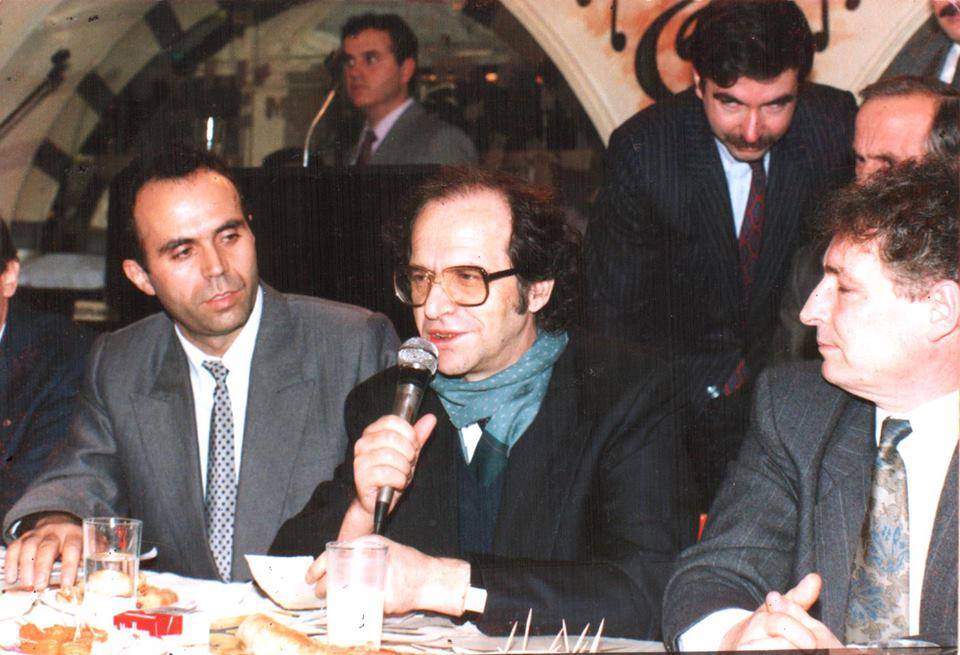 Ibrahim Rugova visiting Istanbul in 1992, Kamil Bitiş is sitting by his side. Photo: Courtesy of Kamil Bitiş

These fears were amply confirmed in 1999. In mid-April 1999, Serbian police and paramilitaries arrived in Bitiş’s family village, Sllovi, where they torched and plundered houses and massacred upwards of 35 people. Of the 16 victims whose remains were later uncovered at the Batajnica military base near Belgrade, three were named Bytyqi.

After full-on war broke out in 1998 and 1999, many Kosovo Albanians found refuge in Bayrampaşa and Turkey, often with relatives.

Bitiş’s family history is not only emblematic of Albanian migration to Turkey, but also of the challenges in maintaining Albanian language and culture outside the homeland. Bitiş’s wife is an Albanian whose family came to Turkey in 1912 and maintained their Albanian for generations because they settled in a village that was almost entirely Albanian. Though Bitiş’s children speak Albanian, they all married non-Albanian Turks. “That means my grandchildren are Albanian kids who don’t speak Albanian, and they probably won’t ever know it,” Bitiş said.

But Bitiş sees this assimilation as natural and almost inevitable. All the same, like many Albanians in Turkey, he is passionate about spreading and sharing his culture as widely as he can.

To that end, these days he doesn’t charge any money to teach Albanian. “Some like to go to football matches,” said Bitiş, “and others like to watch television or to travel.” But Bitiş’s hobby is different, “If I am able to teach even a single word of Albanian to one or two people, I feel happy.”

FEATURE IMAGE: Bitiş family photo from 1966 when the family visited Kosovo as tourists, two years after giving up Yugoslav citizenship and migrating to Turkey. Photo: Courtesy of Kamil Bitiş.