The Ministry of Culture said that actors’ salaries will be raised by January of next year after Kosovo National Theatre actors threatened an indefinite strike.

In “Don Quixote’s New Adventures” by Tariq Ali, the only learned characters that discuss books, art, and philosophy are the Donkey and the horse Rocinante. While humans — “superior beings” as the play calls them — illustrate the new society full of injustice, corruption, and inequality, the two animals accompanying Don Quixote and Sancho Panza seem to be the only voices of reason.

In Kosovo’s rendition, which was staged in Prishtina this week, Don Quixote’s boxing gloves punched the air as he listed Kosovo’s various societal ills. Out of breath and defeated, he declared, “today, a Don Quixote is the person who dares to speak up.”

It was a fitting play for Kosovo’s capital this week.

On Monday, the resident actors of the Kosovo National Theatre staged a walkout and cancelled the performance of “Balkan Bordello” to kick off a social media campaign calling for higher salaries. Actors changed their social media profile pictures to black and white cover shots including the hashtags #veçpojukqyrim, #ngrevë, #meaktorët,  (‘we are just watching you,’ ‘on strike,’ and ‘with the actors’).

Performances resumed on Tuesday, but were accompanied by the actors’ daily protest messages on social media, which included a countdown number for their ultimatum: to officially call a strike on all performances if their demands for salary increases were not met by Friday.

However, right in the nick of time, the Kosovo National Theatre Union Association and the Ministry of Culture reached a deal to halt the walkouts, and for now, to call off the planned strike.

Minister of Culture Kujtim Gashi said that actors’ salaries will be raised in January.

“Together with the Kosovo National Theatre Union Association, we will have a common vision to work together, so that in January there will be a raise for all actors and performers,” Minister Gashi said late Friday afternoon.

In the days leading up to the actors’ ultimatum, Shkelzen Veseli, Council President of the Kosovo National Theatre Union Association and one of the actors in “Don Quixote,” said that the actions organized this week were the culmination of nearly two years of advocacy. 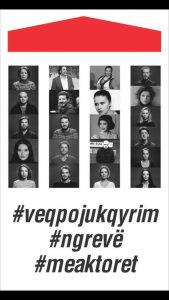 “For 18 months, we negotiated for an increase of the National Theatre actors’ base salary with the Ministry of Culture, Youth and Sports of the previous administration,” he said.

About a month ago, the actors also met with Gashi, the newly named Minister of Culture. But the ministerial windmills just kept turning.

Veseli explained that the actors organized this week to publicize their demand for higher salaries, which are currently set to 437 euros before taxes. He emphasized that all that the actors have been asking is for their salaries be similar to other actors in the region, ranging from 750 to 1,400 euros a month.

“We did not just wake up one day wanting more money,” added Veseli, who highlighted the long hours that actors put in — sometimes up to 18 hours a day and during official holidays.

The National Theatre is among the 16 cultural institutions overseen by the Ministry of Culture. Currently, the paygrade of actors is the same as that of a mid-level civil servant who is required to work a 40-hour week with a 8:00 am to 4:00 pm schedule. Beside the base salary, the National Theatre actors also receive a small percentage pay that varies, as well as an honorarium of approximately 20 euros per performance.

“The Ministry of Culture, Youth, and Sports considers the actors’ requests to be rightful and legitimate,” Samir Hoxha, senior political advisor at this ministry, told Prishtina Insight on Wednesday in a written response. Hoxha added that they have been consulting the regulations in their attempt to find a solution that would also be in accordance with their budget.

But, Hoxha said, the increase of salaries is not in the competency of the Ministry of Culture, Youth, and Sports, “but rather that of the government.”

“Nonetheless, Minister [Kujtim] Gashi remains committed to addressing the requests of the Actors Union of the National Theatre, and therefore we invite the actors to continue their work and to become part of our efforts to address this issue with the Government of the Republic of Kosovo.”

At Friday’s press conference, Minister Gashi said he got confirmation from the Ministry of Finance that salaries will be increased next year, but he did not specify how much.

Ardian Morina, an actor and member of the association, said that the actors will continue their fight for higher pay.

“Our demand was very clear and therefore we have suspended our strike,” actor Ardian Morina told Prishtina Insight on Friday. “We will work to achieve our demand: to reach comparable salaries with the region. Be certain of this.”

Some actors and actresses supporting the association are not actually a part of the national theater’s resident ensemble, but are paid as outside contractors.

Fatlume Bunjaku, an independent actress who is also part of the Don Quixote production, said that she is in solidarity with her colleagues.

She emphasized the long hours that actors and actresses put in, and that rehearsal hours do not even account for time spent studying the script at home and getting into character.

To make do, many actors have been forced to take side projects and odd jobs. Many are also involved in several plays or film projects simultaneously, which sometimes can take a toll on their creative energies.

“To be completely honest, there were moments when I felt drained and felt like I had nothing more to give,” said Bunjaku, mentioning a period when she was involved in two films, a play, and running her own radio show. “If we were paid better for our work as actors, then we would not have been required to look for other jobs.”

Which is the biggest political party in Kosovo?

by Mehdi Sejdiu
Next: News

Ulrike Lunacek: Kosovo must use its ‘window of opportunity’