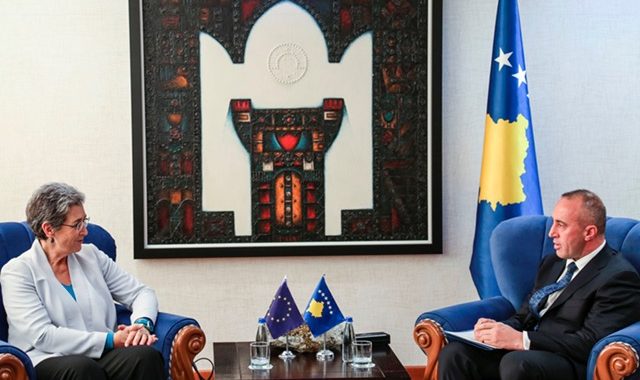 Ulrike Lunacek: Kosovo must use its ‘window of opportunity’

In her last visit as Rapporteur for Kosovo, MEP Ulrike Lunacek warned that Kosovo must swiftly pass the demarcation deal with Montenegro, because ‘doors may close’ for the country.

“In the eight years that I have served [as Kosovo Rapporteur], there has been progress, but there is still room for improvement — in Kosovo itself, in the relationship between Kosovo and the European Union, but also in the relationship between Kosovo and Serbia,” said the former Vice-President of the European Parliament and Rapporteur for Kosovo, MEP Ulrike Lunacek, during her last visit as to the country as Rapporteur.

At her outgoing press conference on Tuesday, Lunacek gave an overview of the progress she has noted in Kosovo over the years, including the implementation of justice agreement, improvements to the electoral processes in the country, despite concerns about intimidation in Serb-majority municipalities, and last year’s signing of the Stabilisation and Association Agreement.

However, Lunacek used her last trip to call on Kosovo to fulfill the two remaining requirements set by the EU for visa liberalization: border demarcation and progress in the fight against corruption.

“I would like to call on everyone in the Assembly of Kosovo to move ahead and ratify the border demarcation with Montenegro,” said Lunacek.

“At the moment, and until the next European [Parliament] elections in a year and a half, there is a kind of window of opportunity — with the upcoming [2018] EU presidencies of Bulgaria and then Austria, who support Kosovo’s independence,” she said, suggesting that the current political climate in Europe can be favorable for Kosovo’s visa liberalization.

“The clock is ticking,” she added, stressing that the movement of refugees and migrants to Europe, especially due to conflicts in the Middle East, has changed the political landscape in several EU member states.

“This is an atmosphere that in the future could have an influence on decisions about Kosovo,” she warned. “So you really have to use this time now because this door might close, and you know me, I am a friend of Kosovo, I am not telling you things that are not true. But this [demarcation] really has to be done now, because it’s about the rights of citizens.”

As Rapporteur for Kosovo since 2009, Lunacek has advocated for Kosovo’s path towards becoming an EU member state. She has urged the five remaining non-recognizing EU countries to accept Kosovo’s independence, saying that their non-recognition is “harming progress.”

“I regret that during all those eight years, it hasn’t been possible to make these five recognize Kosovo, because this would make a lot of things a lot easier, as well as for us in the EU,” she said on Tuesday.

She also used the occasion to introduce her successor, MEP Igor Soltes, to political and civil society representatives.

Soltes is not new to Kosovo — he helped found the Public Procurement Office. Prior to his new appointment, he served at the Slovenian Court of Auditors.

“As Rapporteur I will focus my energy on the auditing of public finances … because without this transparency, you cannot not be sure where your money is going,” said Soltes, adding that legislation in Kosovo is relatively good but there are problems with implementation. “Without independent judges and prosecutors, you can not defend basic human rights of citizens.”

Yesterday, Kosovo Prime Minister Ramush Haradinaj had a farewell meeting with Lunacek, also accompanied by Soltes. The Prime Minister praised “the work and engagement of Rapporteur Lunacek and her unswerving support for Kosovo in the European Parliament and the EU.”

“You have been Kosovo’s voice in Brussels and of Brussels in Kosovo: a sincere and constructive voice,” President Thaci said of Lunacek.
After Austria’s recent elections and the Green Party’s failure to cross the threshold for Austrian Parliament, Lunacek decided to resign from political functions within the Green Party of Austria and announced that she would no longer hold her seat as MEP.