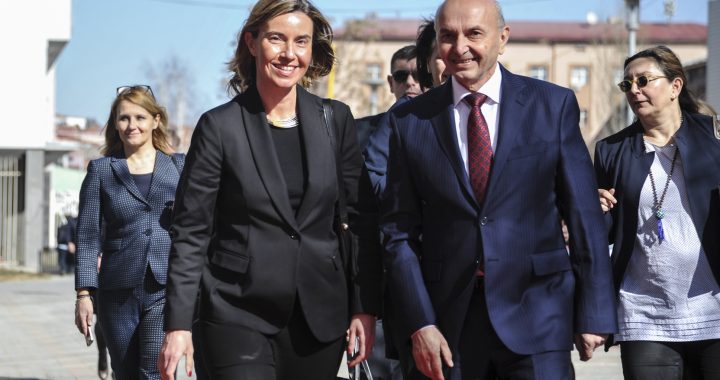 Kosovo is the last stop on her tour, which included visits to Montenegro, Bosnia and Herzegovina, Macedonia, Serbia and Albania.

After their meeting in Prishtina, Kosovo PM Mustafa and Mogherini held a joint press conference.

Citing tensions as a reason for her visit, Mogherini said that “the European path” for Kosovo is a priority for the EU.

“I would like to say very clearly…[it is] time to vote for the demarcation deal with Montenegro,” said Mogherini.

“This will unblock the visa liberalization for the people of Kosovo. We are ready for that, it is now up to the parliament of this country to take the next steps.”

Mogherini also expressed her hope that the opposition parties which have been against the deal would set aside their differences in the interest of Kosovo’s people, who “want and deserve” visa liberalization.

“I thanked the PM and the president for the very constructive and positive attitudes. We faced difficult moments in the past months,” said Mogherini. “As the Prime Minister mentioned, there is no alternative for the dialogue and the dialogue is something that is not done for the sake of Brussels. This is at the service of the people of Kosovo.”

“The Mitrovica bridge will no longer mark division and confrontation, but will become the symbol, I hope, I believe between Kosovo Serb and Kosovo Albanian communities,” said Mogherini.

After her meetings in Prishtina the high representative visited Mitrovica, where the revitalization project of the bridge and pedestrian street, brokered and financed by the EU, remains unfinished.

“The bridge will unite the city and its citizens from the north and the south. This is not a result of aliens, but of people,” said Mogherini in Mitrovica.