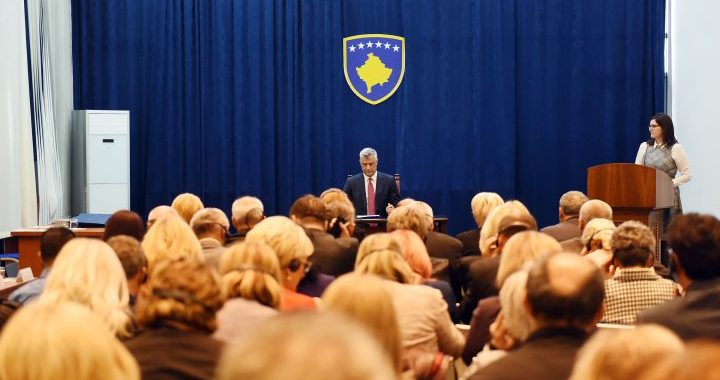 Thaci signing the decrees. | Photo courtesy of the President's Office.

Forty judges and thirteen prosecutors were decreed today, marking the integration of the judiciary in the northern part of the country into Kosovo laws.

After northern Kosovo prosecutors and judges were decreed today, President Hashim Thaci welcomed their integration in the Kosovo judicial system.

The Brussels-facilitated agreement to integrate Kosovo’s justice system was supposed to be implemented by October 17, but the 42 judges and 14 prosecutors did not appear to the President’s Office to be sworn in. Kosovo President Hashim Thaci blamed Serbia for the debacle.

But today, President Thaci said, was a breakthrough for integration and rule of law in Kosovo.

“I welcome your readiness to integrate in the Kosovo judicial system and work in agreement with the Kosovo legislation,” said President Thaci in a statement issued by his office.

“I also welcome your readiness to fulfil and exercise your roles as judges and prosecutors with honor, responsibility, without bias, by respecting rules of professional ethics,” Thaci continued. The President also thanked the international community for their help, saying that “our international friends supported this journey.”

Today, a great breakthrough in integration of communities & rule of law in entire Republic of #Kosovo. Over 50 judges/ prosecutors named! pic.twitter.com/e8bSau7AFa

The European Union Office in Kosovo also issued a statement welcoming the integration of the judiciary, a result of the Brussels-facilitated dialogue justice agreement signed in February 2015.

“A representative judiciary and a uniform implementation of Kosovo law will further rule of law as a key public service and a critical incentive for economic growth and investments,” the statement concluded.