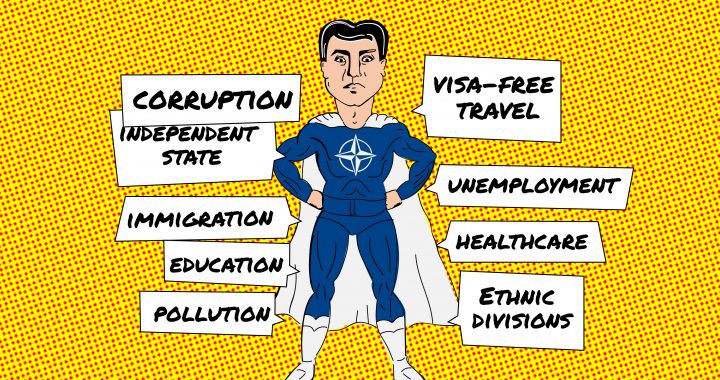 NATO’s intervention in Kosovo was an act of symbolic importance for the West’s ‘narrative of success.’ 20 years later, Kosovo is still waiting for the transformative power of the West to catch on.

On March 24, 1999 NATO launched Operation Allied Force, an almost three-month military campaign against the former Yugoslavia to stop the oppression of Kosovo Albanians by the Milosevic regime. While the intervention was (unsurprisingly) welcomed by Kosovo’s Albanian community, it sparked a divisive global debate; many lauded it as a ‘humanitarian intervention,’ while others criticized it as an illegal act of ‘neo-imperialism.’ Kosovo was thus propelled from the periphery to the center of international political debate about law, sovereignty and human rights.

Twenty years later, much has changed, both within Kosovo and internationally. While Kosovo’s importance as an international security issue has diminished, the intervention and its aftermath remains a key moment in post-Cold War international relations. More broadly, Kosovo’s fate since 1999 is illustrative of the rise and fall of Western power.

Given the decade of Milosevic-inspired oppression that preceded the launch of NATO’s military campaign in 1999, the Albanian community’s support for the intervention was hardly a surprise. Yet, it would surely be naive to imagine that the West acted purely out of concern for the plight of Albanians. While Kosovo has long held a historical importance for Serbs and Albanians, its international importance has been largely negligible. Lacking in natural resources, major geopolitical importance, or significant commercial centers, Kosovo was hardly a coveted asset for external powers. But Kosovo’s importance to the West has always had little to do with Kosovo.

The rationale for the intervention primarily related to Kosovo’s symbolic importance. While the end of the Cold War inspired much optimism about the West’s capacity to provide human rights and democracy for all, the bloody dissolution of Yugoslavia in the early 1990s, the failed intervention in Somalia in 1992 and the Rwandan genocide in 1994, dispelled much of the earlier confidence. Allowing Milosevic to continue his tyranny in Kosovo would have further degraded faith in the West.

With the implosion of the Soviet Union, many naturally questioned the utility of NATO given its original purpose, to defend against Soviet invasion, no longer pertained. The intervention in Kosovo, however, reinvigorated the organization and the West; Operation Allied Force demonstrated that NATO’s old mandate – collective defence in response to Soviet aggression – had been superseded by a new commitment to protect human rights and spread liberal democracy. As noted by General Wesley Clark, then NATO’s Supreme Allied Commander, “…this wasn’t a conflict strictly about Kosovo. It wasn’t even a conflict ultimately about ethnic cleansing. It was a battle about the future of NATO, about the credibility of the United States as a force in world affairs.”

For the Albanians in Kosovo, the motives behind the intervention were of course of secondary importance; NATO’s intervention ensured their very existence was no longer in peril. Yet, in the twenty years since, the negative consequences of Kosovo’s real significance to the West ― a symbol of its power ― have become more apparent.

Like the intervention itself, the statebuilding project launched in Kosovo from June 1999 ―  the most ambitious ever undertaken ― was primarily designed to highlight the power of the ‘internationals’ who assumed total control. Kosovo had to be a success that could be held up as a symbol of Western benevolence and power. Ironically, this meant in practice that Kosovo became too important to be left to the people of Kosovo.

This led to micro-management by unaccountable international actors who wielded supreme power, both formally through international organizations ― UNMIK,  the International Civilian Office and EULEX ― and informally through the pressure applied by foreign embassies in Prishtina. It also meant that preserving ‘order’ became the dominant goal. Renewed violence would, of course, have compromised the ‘success’ narrative being crafted. To this end the activities of the criminal elite that came to the fore in Kosovo after NATO’s intervention were tolerated, so long as they agreed to prevent violence within Kosovo and the surrounding region.

Evidence of the extent to which the welfare, and indeed the rights, of the people of Kosovo has been secondary to the primary goal of Kosovo serving as the example that ‘the planet needs’ can be found in the various ways international actors forced Kosovo to bend to their agenda and broader geopolitical goals. These range from the 2013 deal with Serbia on normalization of relations, the establishment of the Specialist Chambers in 2015, the border deal with Montenegro in 2018, and direct interference in elections and Presidential appointments.

Kosovo’s true worth is of course also evident in the fact that its people are stilled denied visa-free travel in the Schengen area, and the recent support amongst key Western states for redrawing Kosovo’s borders.

Kosovo was initially an antidote to the failures in the 1990s which undermined faith in the West’s commitment – and capacity – to protect and promote human rights. Additionally, given the intervention was undertaken despite the vociferous objections of Russia and China, it seemed to exemplify the unrivalled power wielded by the West. This sense of omnipotence no longer pertains.

Kosovo emboldened those who sought to expand the Western sphere of influence; to “reorder the world” as Tony Blair stated. The hubris and misplaced belief in the limitless power of the West impelled by Kosovo was a contributing factor in the subsequent interventions in Afghanistan in 2001 and Iraq in 2003. The effect of both was to ultimately precipitate the steady decline of the West. The 2008 financial crisis, coupled with the rise of rival global powers seeking to counter what they saw as the West’s expansionist project, further diminished Western power. As a result, we now live in a very different world to that of 1999; few could have imagined in the immediate aftermath of Operation Allied Force that Russia would effectively defeat the West in the course of the Syrian civil war that began in 2012, or that populism within the West would imperil the very existence of the EU and propel Donald Trump to the presidency in the US.

Kosovo in 2019 in many ways exemplifies the West’s decline. While Western political leaders continue to peddle the “Kosovo was a success” narrative, when one looks closely, the country is hardly an inspiring example of the transformative impact of Western power. Ethnic divisions remain; corruption is rampant; unemployment and immigration are very high; the education and healthcare systems are inadequate; environmental pollution is a major health hazard; and Kosovo’s very status as an independent state remains unresolved.

Some heralded the intervention in Kosovo and all that it symbolised as “the wave of the future.” In many ways, this has proved to be true, though not for the reasons then imagined.