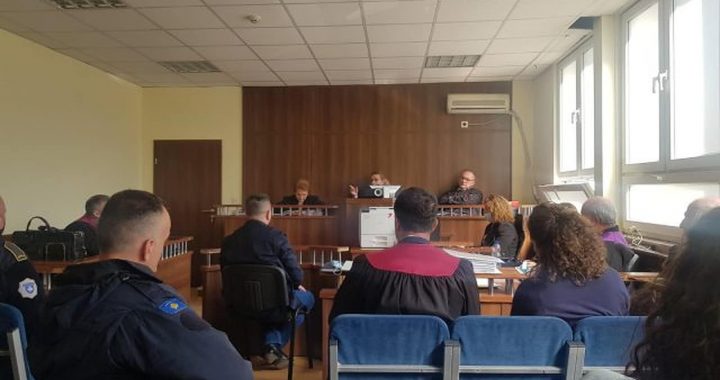 After BIRN Kosovo published a photo of the prosecutor in a murder case chatting with the defendant's lawyer in a restaurant at a resort, the prosecutor has been changed and the investigation reopened.

The Basic Court at Peja in Kosovo has ordered the reopening of the trial for the murder of a 29-year-old following a series of dramatic developments in recent days that caught public attention.

The decision comes days after the case’s prosecutor reclassified the charge from “aggravated murder” to “accidental murder”, sparking reactions from the family of the victim and the public in Kosovo – and also reflects new circumstances about the prosecutor.

After BIRN Kosovo published a photo of the prosecutor, Agron Uka, with Besnik Berisha, the lawyer of the suspect, the Chief State Prosecutor, Aleksander Lumezi, excluded Uka from the case on suspicion of the improper handling of it. This led the Basic Court of Peja to reopen the trial for further examination of the evidence.

“To prevent bias and avoid prejudice in the case of the murder of Agonis Tetaj, today I have decided to take the case off the prosecutor of the case … and reassign it to another prosecutor,” Lumezi said on Thursday, a day after BIRN Kosovo published the photo.

Lumezi also asked the Peja Basic Court not to make a decision on the trial yet but to reopen the investigation to obtain new evidence.

The indictment from the Peja prosecution accused Shaban Gogaj of murdering Agonis Tetajt on September 23, 2018, at the Gogaj AG company premises.

The initial indictment charged him with aggravated murder, claiming that after Gogaj spoke on the phone with an unmentioned person on the day of the murder, he took a Beretta revolver from the drawer and shot Tetaj dead on the spot.

Prosecutor Uka changed the charge to unintentional murder on March 16, 2021 – after which the suspect pleaded guilty.

On Friday, the judge dismissed this session and ordered the prosecution and involved parties to submit new evidence by April 7, while the trial is expected to restart on April 21.

Isuf Tetaj, through a public letter, including video footage from the day of his son’s death, addressed the Chief State Prosecutor, embassies, the media and civil society, expressing dissatisfaction with the action of the prosecutor in deeming his son’s murder “unintentional”.

Tetaj’s lawyer, Berat Tmava, told BIRN on Friday that his client had also asked the trial body to step down, but had not received a decision yet from the Peja Basic Court.

After publishing a redacted version of the video footage, BIRN Kosovo received a photo showing Uka and the suspect’s lawyer, Berisha, at a resort in the suburbs of Gjilan. The photo was reportedly taken in summer 2020.

BIRN also contacted Berisha before publication of the photo, but he denied having had coffee with the prosecutor.

The resort’s manager, Bashkim Hyseni, meanwhile told BIRN that he knew the photo was taken in summer 2020 because of the restaurant’s exterior details.

“During the winter of 2019 we renovated the resort, and this corner is after the opening of the new restaurant. The photo is from 2020,” Hyseni said.

Berisha has denied that the photo implies he was collaborating with prosecutor Uka. On Kosovo TV Channel, T7 on Thursday he said it was normal for him to greet colleagues he works with, no matter which side they represent.