At a time of relative peace and stability, Kosovo’s few remaining Jews have set about preserving what remains of their heritage.

On Prishtina’s Mother Teresa Boulevard, across the road from the Kosovo Assembly, a small plaque marks a piece of history little known to most passersby.

There are few other traces of the extensive Jewish community that once lived in Kosovo, a community that traces its roots back to the 15th century and the migration of Sephardic Jews from Spain and Portugal, and may have numbered as many as 3,000 at the beginning of the 20th century.

The plaque stands at the site of Kosovo’s last synagogue, torn down by the Yugoslav Communist regime in 1963 at a time when many other old buildings including the old city bazaar were razed. By then, Jewish communities across the Balkans had been decimated by the Holocaust.

Today, some 80 Jewish families live in Kosovo, according to Ruzhdi Shkodra, president of BET Israel Jewish Community in Prishtina, including an estimated 60 Jews in the southwestern town of Prizren, once a prosperous trade center under the Ottoman Empire.

Now, Shkodra and others in Kosovo’s Jewish community are waiting for the green light from the Municipality of Prishtina to build a new synagogue in the capital. The government, meanwhile, has provided Prizren’s Jewish community with a building that will be transformed into a museum and synagogue.

“We are working on promoting the project and to get funds so that we can start with the renovation,” Ines Demiri, one of the founders of the official Jewish Community in Kosovo, said of the project in Prizren.

Just over a decade since Kosovo became an independent state, the country’s last remaining Jews are racing against time to preserve their history and heritage, so much of it already lost to war and repression.

“Much of the heritage was destroyed, but some is still there,” said Dardan Islami, director of the 2009 documentary Rescue in Albania that chronicled the efforts of Albanians to save Jews during the Holocaust.

“I believe that the local government in Prishtina should do more to preserve what’s left.” 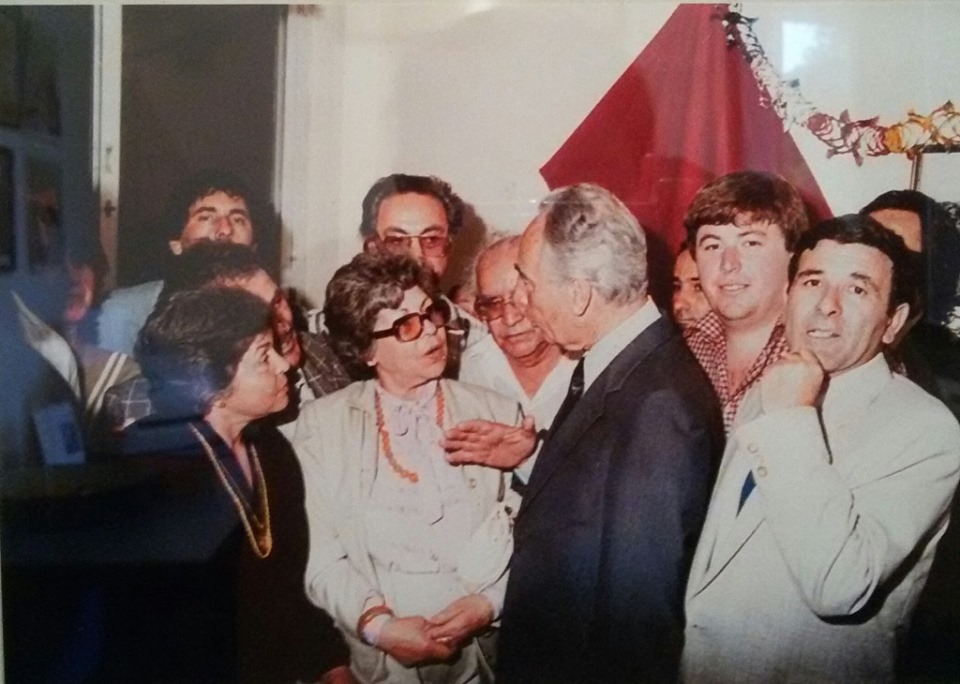 Islami’s film looks at how some Jews from the Balkans found refuge from the Holocaust in Albania, aided in part by ethnic Albanians in Kosovo.

Hysen Prishtina, mayor of Prishtina during World War Two, provided safe passage for Jews from Kosovo to Albania, where they were given shelter by Albanians families under fake names provided by the authorities. According to some reports, over 2,000 were saved.

Votim Demiri, the President of the Jewish Community of Kosovo said that prior to WWII, Jews “practiced various professions as active members of society.”

“Beside the languages of the countries that they came from, they learned Albanian, Serbian and Turkish,” he said.

“Living and working in many parts of Kosovo, they had their own synagogues which survived the Ottoman period but were demolished by the Communist regime in 1963. They had their own Yeshiva [Jewish educational institution], municipality, cemeteries and private properties,” she said.

But while some found refuge during the Holocaust, many did not. According to Demiri, 258 Jews were imprisoned in Prishtina, transferred to the Sajmiste concentration camp in Belgrade and then on to Bergen-Belsen in Germany, “where 92 Jews from Kosovo lost their lives.”

Demiri’s own mother, Ruth Bahar, was saved by an Albanian named Gani Demiri, who later became her husband. Three family members, however, died in the Holocaust.

Of 300-400 Jews who remained in Kosovo after WWII, many eventually moved to Israel, while the population dwindled even further during the bloody collapse of Yugoslavia. 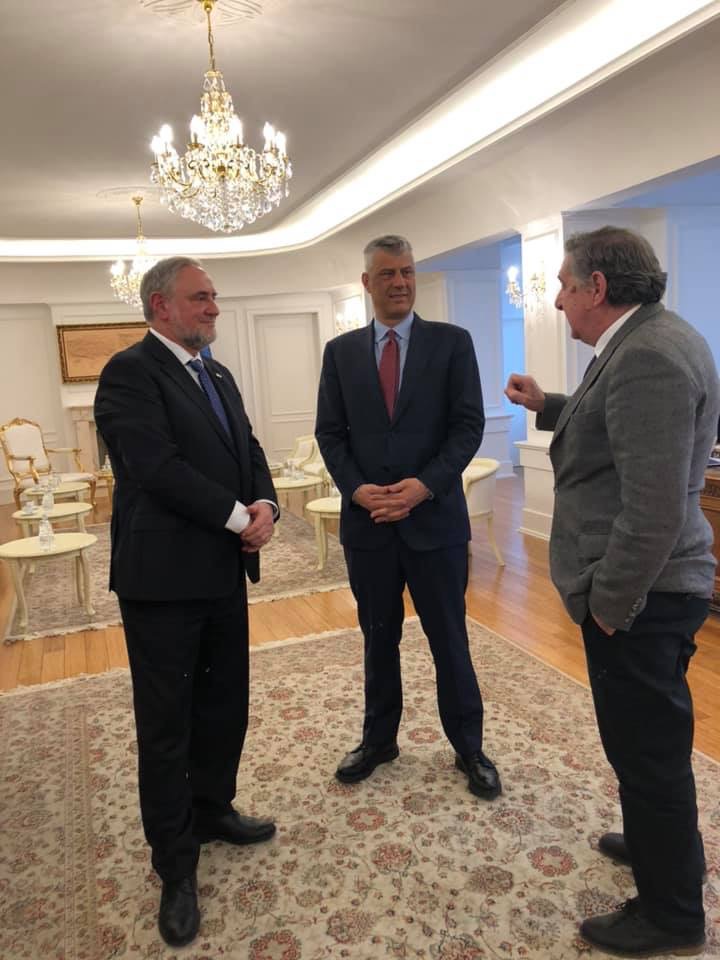 Votim Demiri, the head of the Jewish Community in Kosovo, with Hashim Thaci. Photo: Courtesy of Ines Demiri.

The preservation of Jewish heritage has been severely neglected by the countries that emerged from the ashes of federal Yugoslavia, Kosovo among them.

In 2018, a US State Department report criticized local authorities in Kosovo for failing to maintain Jewish cemeteries in line with the law – in Novo Brdo, Lipjan, Kamenica, Prizren, Mitrovica and Gjilan.

The United Nations Development Program has stepped in, leading a rehabilitation project on a cemetery in Prishtina containing many Jewish graves.

“Weather and time have left their marks at the cemetery,” Maria Suokko, UNDP head in Kosovo, said in a speech at the site.

“As a result, the history, the stories, the memories and, slowly, the identity is disappearing,” she said. “Cemeteries are among the most valuable of historic resources as they reveal us information about historic events, religions, and genealogy.”

Others have taken a different approach.

In 2014, Berlin-based artist Elana Katz held an exhibition in Prishtina’s old boxing club, which is believed to have once belonged to the city’s Jewish community.

The exhibition, ‘Spaced Memory,’ was part of a seven-year project in the Balkans addressing themes of memory, post-memory and the absence of history.

“In the Balkans there were once significant Jewish populations that no longer exist, both as a result of the Holocaust as well as immigration to Israel,” Katz told BIRN. “In this work I am interested in looking into the void left in societies where there was once a sub-culture that is now gone.”

“I consider, very importantly, this to be not only a Jewish topic but a human topic; as in many contexts and regions, sub-cultures, sites, and histories have been lost and/or erased from collective/national memory.”

Synagogues side by side with churches and mosques

Kosovo’s Jewish community is formally recognized under the country’s Law on Freedom of Religion and Shkodra, the president of BET Israel Jewish Community, said instances of anti-Semitism were rare compared with other European countries.

“We celebrate every holiday of the Jewish religion here in Kosovo: Rosh Hashanah [Jewish New Year], Hanukkah, Passover and we observe Shabat every Friday in our own homes,” Shkodra told BIRN.

Even during Hanukkah, a menorah, a nine-branched candelabrum, is set up on the stairs of the national theater to mark the eight-day holiday.

“We live in tolerance,” said Shkodra. “Everytime I walk on the streets, I keep my Jewish hat [Kippah] on and everyone respects it.”

He noted one incident in 2017, when a mayoral candidate in western Kosovo from the Vetevendosje party that won Kosovo’s last election wrote on Facebook that Israel would be “vanished from the earth.” The remark was widely condemned within Kosovo. The previous year, President Hashim Thaci banned the sale and distribution of books deemed anti-Semitic.

Despite Israel’s refusal to recognize Kosovo as independent, Demiri said the Jewish community had worked with Kosovo’s Ministry of Science, Education and Technology on sending Kosovar history teachers to Israel to see firsthand how the history of the Holocaust is taught.

And Flori Dedoni, whose mother’s family was originally from Izmir in Turkey, said he had started a basic Hebrew class in Prishtina. “The last time we had a Jewish school here was before World War II,” he said.

Islami, the filmmaker, said it was just the beginning.

“Synagogues in Prishtina and Prizren need to be completed, rebuilt in the same places with the same stones, as soon as possible,” he said. “For many centuries, the original synagogues existed side by side with the churches and mosques.”

Kurti on LDK: ‘I can’t put more on the table than the people gave them’

Reprised exhibition reminds of ‘the importance of being eerie’