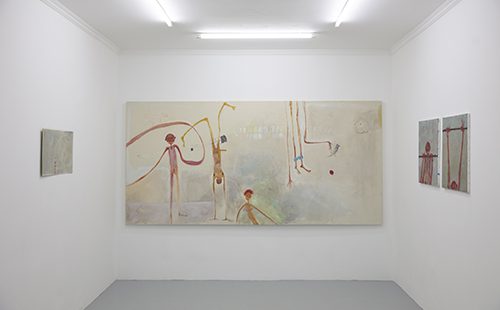 Reprised exhibition reminds of ‘the importance of being eerie’

A series of figurative oil-on-canvas paintings by Kosovo artist Brilant Milazimi are showing at Prishtina’s Lambalambdalambda gallery until Sunday, December 22, which have received both critical and commercial acclaim for their ‘eerie, alien’ depiction of Kosovo’s political and social reality.

Artist Brilant Milazimi’s first exhibition at Prishtina’s Lambdalambdalambda Gallery reopened on Friday after an initial successful run in October, and will be shown until Sunday, December 22. The exhibition, titled “Woke”, features a series of figurative oil-on-canvas paintings, and, according to the artist presents the “Kosovar reality politically and socially.”

Much of Milazimi’s work features naked human figures with false, almost inhuman smiles. According to art critic and historian, Vesa Sahatciu, the paintings exhibited by Milazimi reflect on his life in Kosovo and the tension between its people and the concept of movement.

“The images are completely reduced in shape and give a sense of ease of movement,” Sahatciu said, “as if they were flying towards the sky without any identifiable location. This makes sense, since Brilant is preoccupied with movement, and the lack of it, in his work.”

Sahatciu believes that the exhibition’s name, “Woke,” provides an ironic commentary on the static nature of youth in Kosovo. “To me, the smiles of the ‘woke’ generation are both strained and cynical,” she said. “They have no freedom of movement, and are in a state of constant amusement, only able to feel freedom internally.”

Milazimi told BIRN that his work calls for the “awareness, or awakening” of people in Kosovo. “The drive behind my work and its content lies both in the sublime and in the daily lives we live, but each painting contains a different event in itself,” he said.

Despite this being Milazimi’s first solo exhibition, it has already brought significant international success: two of the paintings have been purchased and will be on display at the National Museum of Hungary in May next year.

In his reflection on the exhibition, art critic Aaron Bogart drew comparisons between the paintings and the 1990s US science-fiction series ‘The X-Files,’ stating that Milazimi’s paintings remind him of portrayals of extraterrestrials in film and television; long winding limbs and cold, empty faces.

“Many of Milazimi’s figures look like they have come from a distant universe and entered the canvas. ‘Touch the Snow,’ for example shows two figures with long, thin arms and legs, placed in the foreground of the composition, as if they were walking towards the viewer,” said Bogart.

Bogart believes that in all of Milazimi’s work the viewer experiences the “haziness of memory,” images that do not have enough detail to fully define them, but that are somehow familiar to all who view them, giving an eerie feel to Milazimi’s paintings: There is always either something missing from them, such as a full human smile, or something that should not be there, like rows of teeth extending beyond where they usually should be.

“They are just familiar enough for us to wonder about their narrative,” Bogart said. “Therein lies the importance of being alien or eerie: We want to believe we are not alone in the unthinkably big universe, and Milazimi’s paintings remind us of this.”